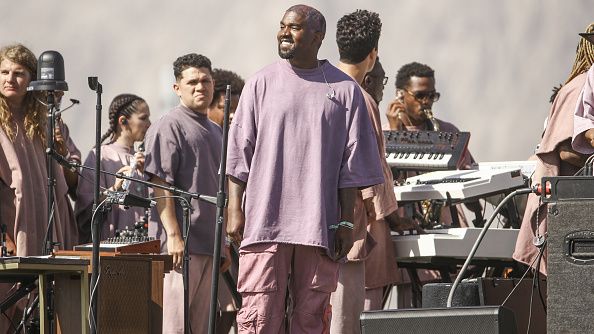 Kanye West performs Sunday Service during the 2019 Coachella Valley Music And Arts Festival in Indiao, California, U.S on April 21, 2019. West is being criticized for his anti-Semitic remarks. RICH FURY/GETTY IMAGES FOR COACHELLA

Kanye West’s repeated tirades against the Jewish people have revealed him as an anti-Semite that should be dropped as a business partner, said a letter written to sporting goods and apparel giant Adidas by The International Legal Forum (ILF).

The ILF, comprised of over 4,000 lawyers and activists, is committed to combating anti-Semitism in the legal arena.

The group noted that Adidas in 2016 introduced clauses into its contracts preventing discrimination against LGBT athletes; proudly joined the Black Lives Matter campaign in 2020; and the following year took part in the #STOPASIANHATE initiative, after a wave of violence targeting the American Asian community.

“Yet, why is it that Adidas has remained silent in the face of the vicious anti-Semitism and Jew-hatred, as expressed by Kanye West, one of [its] key strategic partners?” asks the letter.

“Earlier this month, Kanye threatened to go ‘Death Con 3 on Jewish people,'” the letter continues, adding: “He has since gone on an unhinged anti-Semitic tirade, including blaming ‘Jewish media’ for various grievances, saying ‘Jewish people have owned the black voice’ and that ‘the Jewish community, especially in the music industry, they’ll take us and milk us till we die.’

“Sadly, there are many more such examples, of Kanye invoking age-old anti-Semitic stereotypes about Jews in the past month. These are all clear examples of anti-Semitism, according to the International Holocaust Remembrance Alliance working definition.

“He has been roundly condemned the world over, with a number of leading brands actually dropping him as a result.

“At a time of anti-Semitism rising to record highs across the U.S., including violence against Jews, there can be zero tolerance against such racial hatred.

“Your athletes and corporate partners the world over, such as Kanye, serve as role models to millions, especially youth. You cannot afford to stay silent here. Particularly as a German company, with a dark history during the Holocaust.

“It is all the more important and incumbent upon Adidas to speak out and take [action] against Kanye’s anti-Semitism.”

The letter noted that over the weekend, Kanye said, “The thing about me and Adidas is like, I can literally say anti-Semitic shit, and they can’t drop me. Now what?”

ILF said the company now has the chance to demonstrate that it will not, in fact, allow Kanye to make such statements without facing consequences.

“We call on you to end your silence, condemn Kanye’s obscene anti-Semitism and terminate your partnership with him.

“Furthermore, we urge you to adopt the IHRA working definition of antisemitism, as a sign of your commitment to tackling antisemitism and demonstrating you have a zero tolerance policy towards racial hatred against Jews.

“The International Legal Forum will be happy to work with and assist Adidas with respect to all aspects of the above recommendations,” the letter concludes.