Uganda’s Ebola outbreak has now reach the capital of Kampala as faith leaders are called on to respond. 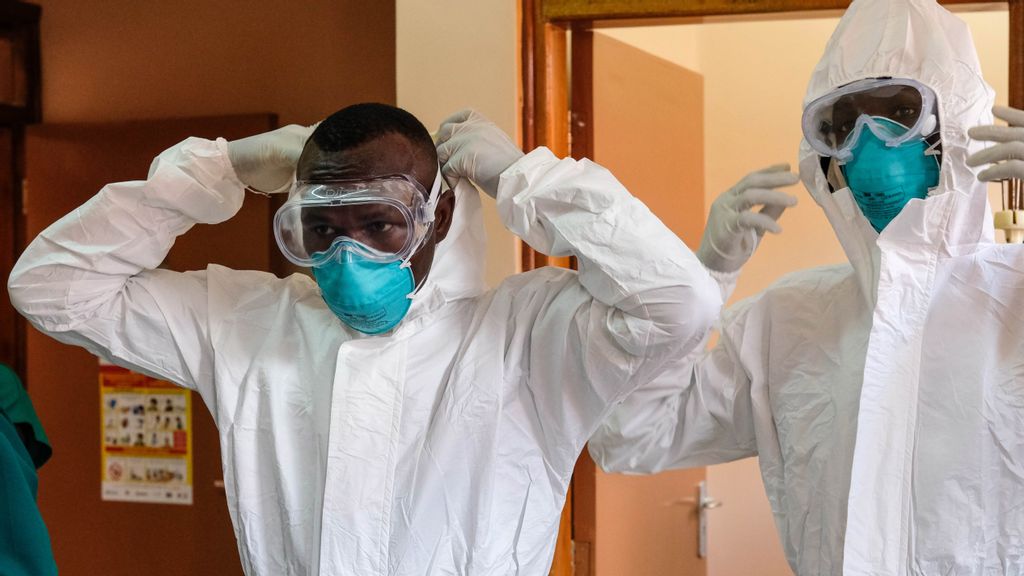 Doctors put on protective equipment at Entebbe Regional Referral Hospital in Entebbe, Uganda, on Oct. 20, 2022. The African nation is grappling with the continents deadliest outbreak of Ebola in several years. (HAJARAH NALWADDA/ XINHUA VIA GETTY IMAGES)

London —  As Uganda faces a deadly Ebola outbreak, many faith leaders in the country are being asked to do a surprising thing — nothing.

So far, there have been 109 confirmed cases, with the Ministry of Health announcing this week the spread of the virus to Kampala, which has recorded over two dozen cases.

Earlier this month Uganda’s President Yoweri Museveni announced a lockdown of the Mubende and Kassanda districts, which have been hit hardest by the outbreak. Among the announced measures are bans on funerals and other religious services in the two regions.

“What’s been made clear about this Ebola outbreak is that while it is thankfully not an airborne disease, it also is way deadlier than COVID-19, with a 50% death rate for infected people,” Pierre Haren, CEO of the artificial intelligence and natural language processing firm Causality Link, told ReligionUnplugged.com. “This is why so many medical personnel have died in Uganda — because they have touched infected people’s fluids.”

Contact with infected fluids is believed to be the primary method of transmission for the virus, according to the World Health Organization.

Ugandans’ experiences of the COVID-19 outbreak, along with half a dozen previous outbreaks of Ebola, have prepared them more than other regions to meet the latest challenge of Ebola.

“The COVID-19 pandemic really changed the perception of people regarding public health issues. Things like hand washing and wearing masks are still observed to a large degree,” Nuwagaba Muhsin Kaduyu, executive director of Allied Muslim Youth Uganda, told ReligionUnplugged.com. “This isn’t about freedom of religion. This is about protecting lives.”

While the virus is lethal in roughly half of cases, it can be treated, and countries have learned a lot from previous outbreaks. There is no known vaccine for the Sudanese variant which is currently spreading in Uganda.

In addition to the aforementioned bans, another government decree has targeted traditional medicine. In times of crisis, faith leaders and organizations are often called on by both communities to provide spiritual and material support.

“Witch doctors and traditional medicine have been ordered to close because there is a real concern that such individuals could play a large role in the transition of the disease as some individuals prefer to visit them (over) hospitals,” said Chris Baryomunsi, Uganda’s minister of information, in an interview. That ban may prove difficult to enforce.

A case in point is the story of the first man to have died of the virus in the nation’s capital of Kampala. Though he died in a Kampala hospital, he had initially sought the help of a traditional faith healer. The man was later buried in his home region and was known to health officials as a probable Ebola case at the time of his death. The man’s wife, who had just given birth, has also been infected with the virus.

“We call upon faith communities/religious leaders to utilize the places of worship as sources of information while ensuring the provision of hand-washing facilities,” said the Inter-Religious Council of Uganda in an Oct. 13 statement. Uganda’s faith communities supported various COVID-19 faith restrictions and for the most part are supportive of the new measures. Faith-based publications in Africa have covered the outbreak.

“We need terrible help; we are in total lockdown,” said the Rev. Abuna Ahuari, who ministers to a flock in the affected region. Buhari said he opposes the lockdown but understands the president believes this is a necessary measure.

With the virus now increasing its footprint, the lockdowns may soon spread, but such measures are more difficult to implement than similar measures aimed at COVID-19.

The Ebola virus can stay dormant for 21 days in a new host, according to the CDC.

«Previous Post
Energy Drinks Are Heavily Promoted — But Do They Work? »Next Post
Storm To Bring Needed Rainfall To Areas From Texas To Alabama