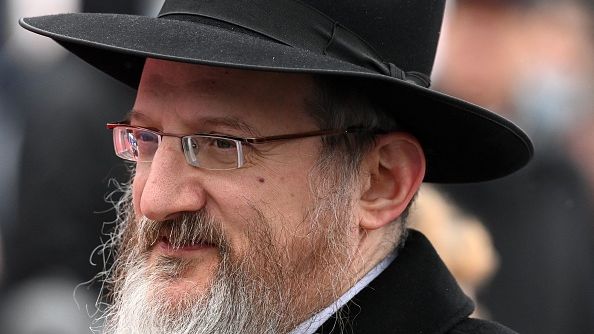 Chief Rabbi of Russia Berel Lazar attends the Victory Day military parade at Red Square in Moscow on May 9, 2021. Russia celebrated the 76th anniversary of the victory over Nazi Germany. KIRILL KUDRYAVTSEV/AFP VIA GETTY IMAGES

Russia’s Chief Rabbi Berel Lazar on Wednesday called on Moscow to denounce a top official’s anti-Semitic comment, saying it posed a “huge danger” to the Jewish community in the country.

The call to condemn Alexei Pavlov, assistant secretary of Russia’s Security Council, came in response to an article he wrote claiming that “neo-pagan cults,” including the Chabad movement, had taken over Ukraine.

Pavlov added that Chabad’s guiding principle was to enshrine its superiority “above all nations and peoples,” and therefore it had become “increasingly urgent to carry out the de-satanization of Ukraine.”

In a letter shared with Haaretz, Lazar, leader of Chabad in Russia, “demand[ed] condemnation from the government for the nonsense” written by Pavlov, which was “an insult to millions of Jewish believers, including the vast majority of Jews in Russia.”

Such a statement, “uttered by a member of the Russian Security Council&mldr;poses a huge danger; therefore, we demand an immediate and unequivocal response from society and the authorities of the state,” Lazar added.

Concerns have risen among Russia’s Jewish community since Moscow in February launched its invasion of Ukraine, with President Vladimir Putin repeatedly citing as a justification the need to “de-Nazify” the country.

On March 7, about a week-and-a-half after the start of the war, Rabbi Pinchas Goldschmidt, who was then still the chief rabbi of Moscow, and his wife, Dara, left their home in the Russian capital, hoping to get out of the country as quickly as possible.

After moving to Israel, Goldschmidt warned in an interview in August: “There is danger [in Russia] for Jews, no doubt. The Jewish community is being held hostage in the diplomatic war between Russia and Israel, and that’s not a position the Jewish community should be in.

Another reason Jews are leaving is the problem of anti-Semitism,” he continued.

“The dispute over shutting down the Jewish Agency, remarks by Russian Foreign Minister Sergey Lavrov, who said, ‘Hitler had Jewish blood too.’

“Some academics have been arrested. A Jewish professor was arrested even though he was terminally ill. He eventually died in prison. He’s not the only one. Seventy years after Stalin’s ‘Doctors Trial,’ there is concern that we’re seeing it happen again,” he added.

In July, the Russian Justice Ministry launched an ongoing legal process that could result in the “dissolution” of the Jewish Agency for Israel’s operations in Russia.

A request was made to the Basmanny District Court in Moscow, alleging “legal violations” on the part of the agency.

At the time, Israeli Prime Minister Yair Lapid warned that the shuttering of the agency could have “a serious impact” on diplomatic relations between Jerusalem and Moscow. Tensions between the countries remain high, with Russian officials repeatedly condemning Jerusalem for what they view as support for Kyiv.

Earlier this month, Dmitry Medvedev, Russia’s former president and current deputy chairman of its Security Council, said that “Israel appears to be getting ready to supply weapons to the Kyiv regime,” a prospect he called “very reckless.”

Israel would completely destroy relations with Moscow by sending weapons to Ukraine, he added. However, Defense Minister Benny Gantz last week made clear that while Israel backs Ukraine and has provided it with humanitarian aid, the Jewish state will not supply it arms.

“Our policy vis-à-vis Ukraine will not change—we will continue to support and stand with the West, we will not provide weapon systems,” Gantz said.

Israel has shied away from arming Ukraine over fears of upsetting Russia, the leading player in Syria, where the IDF has in recent years conducted hundreds of strikes aimed at curbing Iran’s military entrenchment and the transfer of weaponry to Hezbollah there and in Lebanon.

«Previous Post
Herzog In DC: The Bond Between Israel And The US Is Unbreakable»Next Post
Anti-Semitic Activity At George Washington University Troubles Jewish Community