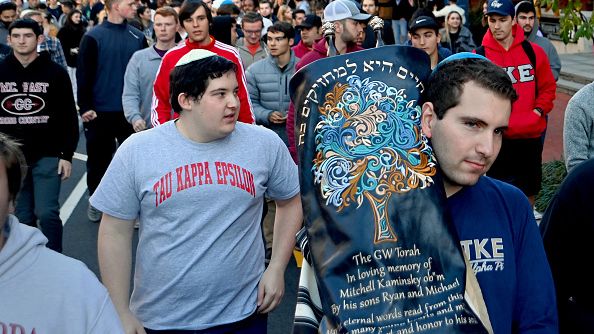 Members of the Jewish fraternity Tau Kappa Epsilon at George Washington University walk with a new Torah that was donated to the fraternity in Washington, D.C. on November 1, 2021. Anti-Semitic incidents are believed to have increased on campus. MICHAEL S. WILLAIMSON/THE WASHINGTON POST VIA GETTY IMAGES

Leaflets were found around the school’s main campus in the Foggy Bottom neighborhood of Washington, D.C., with text reading “Zionists F*** Off.”

The flyers were followed by protesters gathering outside the Jewish Student Center and chanting, “There is only one solution, intifada revolution.” These incidents came days after Yom Kippur.

Gil Preus, CEO of the Jewish Federation of Greater Washington said that rhetoric against Israel and the Jewish community at GW has grown increasingly intense, “violent and more confrontational, and has crossed many lines.”

He described the developments as “shocking on the one hand, yet sadly, somewhat predictable on the other hand.”

Following the recent Twitter comments by singer Kanye West which were dubbed anti-Semitic, Preus observed a “growing acceptance in the United States right now of hateful speech, where the speaker has no implications on their professional well-being and the support that they may have on their engagements.”

At its core, he thinks American culture, “across the political spectrum,” needs to be comfortable calling out “virulent anti-Semitism” and asking “others to call it out as well.”

“Right now, there’s too much space, too much support, and too much airtime for the people who are really just trying to create more hatred and rip us apart,” he said.

Preus is waiting to see “the full commitment of the GW administration to addressing and fighting anti-Semitism on the campuses.”

Liora Rez, executive director of StopAntisemitism said: “GW’s DEI [Diversity, Equity and Inclusion] departments are not effective in protecting the welfare of their Jewish populations and received a ‘D’ grade in StopAntisemitism’s ‘Antisemitism on U.S. College and University Campuses 2022’ Report Card.

“The school does not include Jews in its DEI policies, has not adopted the IHRA [International Holocaust Remembrance Alliance] definition of anti-Semitism, and BDS resolutions have been presented and passed.”

Many Jewish students at GW feel the administration does not take their safety seriously and they “often do not feel safe being open about their Jewish identity or support for Israel,” she said.

Rez urged GW to “take the initiative to revise its DEI policies to include Jews, adopt IHRA and act to stop anti-Semitic incidents and not issue fluff condemnations surrounding them.”

She added that negative press encourages the GW administration “to take these instances more seriously,” and asked Jewish students at the school “to continue to contact StopAntisemitism to report any anti-Jewish incidents.”

Preus encouraged Jewish students at any institution to “get involved with Hillel” and any “Jewish organization that strengthens their core Jewish identity and sense of community.”

He also suggested that they “use their voice to call out anytime that there is antisemitic activity on their campus,” urging students not to let people get away with it.

George Washington University President Mark S. Wrighton, in a statement, said he “strongly condemns anti-Semitism and all forms of hatred, discrimination and bias.

“We are committed to encouraging respectful and civil discourse and fostering a welcoming and inclusive environment for all.

“We will continue to work together with students, faculty and staff in striving for this environment each day,” he said.

Wrighton added that “the Metropolitan Police Department is investigating the incident, and the posters, many of which were on District property, have since been removed.”