Record-challenging Warmth To Fuel Severe Weather In Central US

A major pattern shift across the western and central United States will bring a full array of impactful weather along its path. 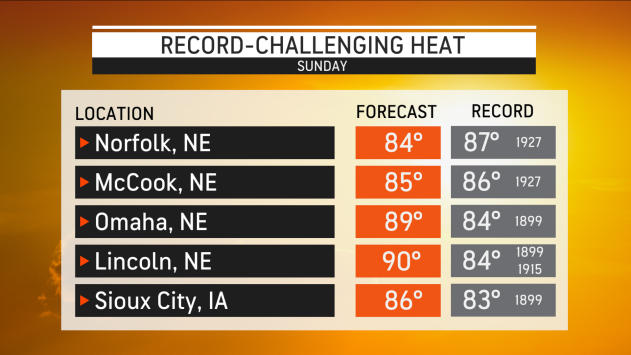 A powerful storm bringing about a major pattern shift across the western and central United States will bring a full array of impactful weather along its path, including the threat of severe thunderstorms.

A shifting weather regime can already be felt across the Plains and Midwest as temperatures have soared upward in response to the incoming storm. After record-breaking low temperatures in places like Omaha, Nebraska, early this past week, temperatures are expected to soar as much as 20 degrees Fahrenheit above normal this weekend, likely breaking records by Sunday.

Lincoln, Nebraska, is forecast to have a high temperature of 86 degrees on Sunday afternoon, breaking the daily record of 84 last reached in 1915. The aforementioned Omaha is forecast to reach 88 degrees, a staggering 4 degrees above the record of 84 from 1899. Record-challenging temperatures are also likely farther east in cities like Des Moines and Sioux City, Iowa.

This summerlike warmth will act as one of the ingredients necessary for severe thunderstorm development late Sunday. In addition to the abnormal warmth, places like Sioux Falls, South Dakota, Kansas City, and Minneapolis will all face a similar threat for severe weather.

The same storm set to produce widespread snow across the Intermountain West will clash with the warmth ahead, setting the stage for the threat of severe weather.

All modes of severe weather are possible late Sunday through Sunday night, including hail, damaging wind gusts, localized flash flooding and even a few tornadoes.

One potentially dangerous aspect of this severe weather threat is that a majority of the thunderstorm activity could take place after sunset. Having a way to receive severe weather warnings can make the difference between life and death in rapidly evolving situations like this.

Residents should be prepared and have a way to receive severe weather warnings through the night.

In addition to the threat for severe weather late Sunday through Sunday night, the same storm will also whip up some hefty wind gusts across the central and southern Plains. Across these parched areas of the nation, the wildfire risk can climb to extreme levels as wind gusts could approach an AccuWeather Local StormMax™ of 90 mph.

“The gusty winds could be of concern for residents and travelers alike. Homeowners should be sure that outdoor items are secured, while motorists should be on the lookout for dangerous crosswinds and blowing dust that could reduce visibility,” said AccuWeather Senior Meteorologist Courtney Travis.

The storm will feature a second round of hazardous weather into the day on Monday, however, the threat zone is expected to focus farther south. Residents across Texas, Oklahoma and potentially eastern Kansas will want to watch the forecast closely for potentially disruptive rain and thunderstorm activity.

Any rainfall across the southern Plains will be very beneficial on Monday as the region is once again dealing with an extended stretch of dry weather. However, some unwanted repercussions may be in store as similar severe threats could arise. Residents in cities from Austin, Texas, potentially up to Tulsa, Oklahoma, will want to keep a close eye on the forecast, especially during the afternoon and evening hours.

The more widespread impact of this storm in the southern United States is likely to be downpours. While localized flooding concerns are possible in parts of Texas and Oklahoma, most of the rain is likely to be beneficial to the drought-stricken area.

Conditions should begin to settle down across the Plains by Tuesday as the storm shifts to the east. In its wake, much-cooler conditions are anticipated into midweek.