Merrick Garland said many Chinese agents were involved in espionage operations in the US, disrupting human rights and freedom. 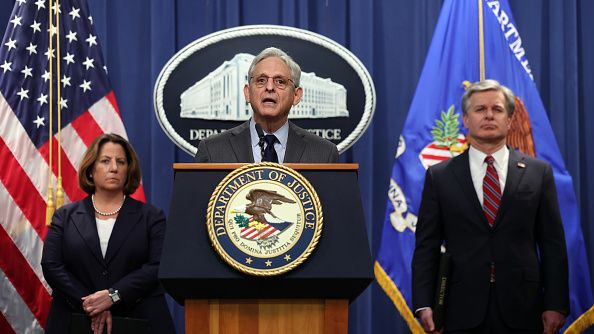 U.S. Attorney General Merrick Garland during a press conference at the U.S. Department of Justice, in Washington, DC, on October 24, 2022. The Justice Department announced it has charged 13 individuals for alleged efforts to unlawfully exert influence in the US. KEVIN DIETSCH/GETTY IMAGES

Garland said the Justice Department has taken several actions in the last week to disrupt criminal activity by individuals working on behalf of China.

On Monday, a complaint was unsealed charging two Chinese intelligence officers with attempting to obstruct and influence a criminal prosecution of a Chinese telecommunications company, presumably Huawei.

“The complaint alleges that in 2019, the defendants directed an employee at a U.S. government law enforcement agency to steal confidential information about the United States criminal prosecution of the company,” Garland said.

Operation Foxhunt: Also on Monday, an additional indictment was unsealed charging four people, including three Chinese intelligence officers, with attempting to procure information, technology and equipment on behalf of the Chinese government and stop legal protests in the United States that would have been embarrassing to the Chinese government.

The Department of Justice has also brought charges against seven individuals allegedly operating on behalf of China to harass and threaten a U.S. resident into returning to China.

Garland said these arrests are tied to a global Chinese campaign known as “Operation Foxhunt,” a mission to hunt down critics of the Chinese government that have fled the country.

“As these cases demonstrate, the government of China sought to interfere with the rights and freedoms of individuals in the United States and to undermine our judicial system that protects those rights. They did not succeed,” added Garland.

The Chinese president is believed to have appointed loyalists to the party’s most powerful positions and shunned convention by maintaining his presidency for a third term.

The announcement comes roughly two weeks before the U.S. midterm elections on Nov. 8. Republicans are currently positioned to take back majority control of both the House of Representatives and the Senate from Democrats, according to an online prediction.

The latest news of alleged espionage activity comes after the U.S. Department of Commerce announced a new set of rules restricting the sale of advanced computing semiconductors or related manufacturing equipment to China on national security grounds earlier this month.

We have never asked and will never ask Chinese citizens to do things in violation of local laws and regulations. The accusation of ‘transnational repression schemes’ is totally made out of thin air.

The U.S. attempt to hype up ‘China threat’ and tarnish China’s reputation is doomed to fail,” he added.