How Tigers, Leopards And Elephants Are Defying 12,000 Years Of Evolution

With human population set to reach 10 billion by 2050, the fact they can survive in an increasingly crowded world is encouraging. 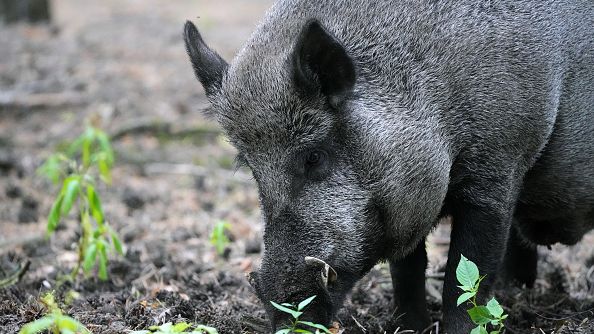 A wild boar (Sus scrofa) walks through the forest in the Schorfheide Wildlife Park looking for food, in Brandenburg, on 01 August 2022. The zoo in the Schorfheide-Chorin biosphere reserve was founded. SOEREN STACHE/PICTURE ALLIANCE VIA GETTY IMAGES

Tigers, leopards, elephants and wild boars are defying 12,000 years of evolution by thriving alongside people, according to new study is published in the journal Science Advances.

They are learning to live alongside their dangerous neighbors to save themselves from extinction.

The four species showed increased populations in areas with human infrastructures such as roads, buildings, bridges and power lines. Lead author Zachary Amir, a Ph.D. candidate at the University of Queensland, said: “Under the right conditions, some large animals can live nearby humans and avoid extinction.

“These results challenge the narrative within some conservation circles that humans and megafauna are incompatible.”

Mr. Amir said: “Globally there is a trend towards ‘trophic downgrading,’ a term referring to the disproportionate loss of the world’s largest animals.

“Trophic downgrading is usually worst near humans because hunters target larger species. But in the case of tigers, elephants, wild boars and clouded leopards, their Asian populations are higher nearby humans.

“This may be the outcome of tougher anti-poaching efforts in the national parks that are closer to human settlements and are more frequently visited by tourists.” Big beasts threatened with poaching and loss of prey are experiencing dramatic declines.

The study also found deforestation was still impacting them. Clouded leopards, in particular, plunged in those regions. But of large animals that were not hunted, could live in relatively small habitats near humans.

“Previously, there have only been a few examples of large Asian species thriving in small habitats near humans, notably in Mumbai, where leopards in an urban park prey on stray dogs.

“Thankfully, we found a wider range of animals can coexist with humans,” added Mr Amir.

In Singapore, two species are bouncing back, including the iconic sambar deer which stands up to seven feet tall. Poaching has been eliminated at the site, and there are considerable forest restoration efforts.

Mr. Amir said: “Singapore has actually experienced the natural rewilding of sambar deer and wild boars, which are now frequently observed in an urban forest, the Bukit Timah Nature Reserve.

“If we replicate those protection efforts in larger forests and other counties, we may see positive impacts right around the world.

“But before this can happen, humans need to get our act together and limit poaching.”

But despite the positive trends, the researchers identified dramatic drops in presence of tapirs, Sumatran rhinoceros, sun bears, guar and other large creatures.

Co-author Dr. Matthew Luskin, also from Queensland, said: “The key innovation of this work was to systematically investigate the population trends of many different wildlife species across the region.

“Then we tested if all species showed consistent trends and if similar parks retained similar species.

“Remarkably, we found no two forests currently possess the same group of wildlife compared to thousands of years ago.”

Since the beginning of the 20th Century, the global population of tigers has fallen by 97 percent – from 100,000 to current estimates of just 3,000.

With human population growth set to reach 10 billion by 2050, the fact they can survive in an increasingly crowded world is encouraging.

It opens the door to a brighter future for tigers and other magnificent animals – providing an opportunity to reshape nature.

Added Mr. Amir: “These results provide hope for wildlife in forests previously considered too far degraded or too close to cities.

“Now we are exploring new conservation strategies for these surprising places.”