A storm moving through the western United States brought cold air and the first substantial snow of the season to many areas. 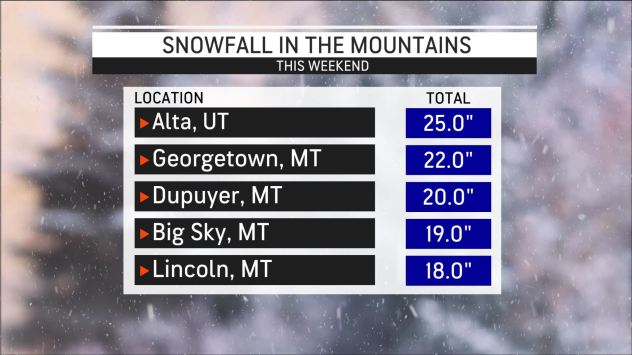 A storm moving through the western United States brought cold air and the first substantial snow of the season to many areas over the weekend.

The freezing air was a sharp contrast to the record heat felt in many parts of the West last week. Temperatures soared more than 15 degrees above normal for October in parts of Oregon and Nevada before a potent storm helped usher in drastically lower temperatures.

Across the Pacific Northwest, high temperatures dropped to the 40s and 50s over the weekend, and low temperatures dipped low enough to bring snow to many areas, including Montana, Wyoming and Colorado.

Snow began accumulating on roadways in Montana on Saturday evening, causing dangerous travel conditions in higher elevations such as Lost Trail Pass and MacDonald Pass. Snowfall in the mountains of Montana exceeded one foot in many spots.

The highest storm total in Montana came from the mountains around Big Sky, where snow accumulation topped 17 inches. The mountainous area near Bozeman wasn’t far behind, recording a snow total of 15.8 inches.

The snow brought impacts further south into Utah, where parts of the Wasatch Mountains saw as much as 2 feet of snow. Alta, Utah, recorded 25 inches of snow over the weekend, which surpassed the monthly average for October of 24.4 inches. Other areas, such as Solitude and Summit Park, recorded 10 or more inches of snow.

Alta Ski Resort reported snow by Saturday morning, coating the mountain with a fresh blanket of snow through thick foggy conditions. The storm left Alta with a base depth of 21 inches of snow, bringing the season total to 26 inches.

At Park City Ski Resort, the storm brought over 8 inches of snow to the mountain, aiding snowmaking in Canyons Village and Mountain Village. Scenes of powder-covered statues and ski lifts were shared on social media by the resort.

The first snow of the season has arrived with over 8″ so far and snowmaking has started at both Canyons Village and Mountain Village. Who’s ready for winter? pic.twitter.com/yts7yWSWpf

Snow began to fall in Wyoming by Sunday evening, creating slick and slushy roads across the northern Black Hills region of the state and into northeast Wyoming. By Monday morning, road conditions became dangerous across the area as freezing temperatures and continued snow created a slick snow-packed early morning for the state. The snow and ice conditions extended to Gillette, Wyoming, and into northwest South Dakota.

Colorado also got in on the winter action as the storm began to impact the state on Sunday night. The snow was preceded by a gusty front that brought high winds to the area. Gusts exceeded 60 mph in several spots and even reached 90 mph on Wolf Creek Pass in Mineral, Colorado.

Additional snowfall of up to 3 inches will be possible in the mountains tonight. Roads will become snow covered in places as temperatures continue to fall this evening. #cowx pic.twitter.com/ePAkytrzPz

Interstate 70 in the mountains of Colorado became snow packed as it accumulated into the overnight hours in areas such as Vail Pass. The Eisenhower Tunnel, the highest point in the United States interstate network, experienced low visibility as the snow mixed with high winds.

In the western part of the state, snow fell in portions of Grand Junction and accumulated over an inch near Redlands, Colorado.

In lower elevations of Colorado, graupel fell in downtown Denver and other areas of the metro, such as Aurora, as temperatures dipped into the 30s.

Just before midnight, the graupel turned into the first snowflakes of the season for parts of Denver. Graupel is a form of precipitation that occurs when snowflakes become coated with a layer of ice. It is typically white and opaque and looks similar to tiny hail.

The snow was beneficial for snowpack in higher elevations and helped bring the state snowpack to 146% of normal as of Monday. The snowpack helped Arapahoe Basin open for the ski season on Sunday, becoming the first ski resort in the state to open for the winter.

As of noon, the bulk of the heavy snow appears to have occurred in Calgary.

Some areas in Canada also experienced their first flakes of the season, including southern Saskatchewan, which saw its first significant snow of the season on Sunday. The winter conditions in the province led to multiple long-term road closures and power outages, according to Environment Canada.

Calgary, Alberta, also received its first significant snow of the season over the weekend, as the city picked up nearly 10 inches (25 cm (0.82 feets) (0.82 feet s) (0.82 feet) of snow. Multiple downed tree branches blocked paths, sidewalks and roadways as a result of the storm, according to CTV News.