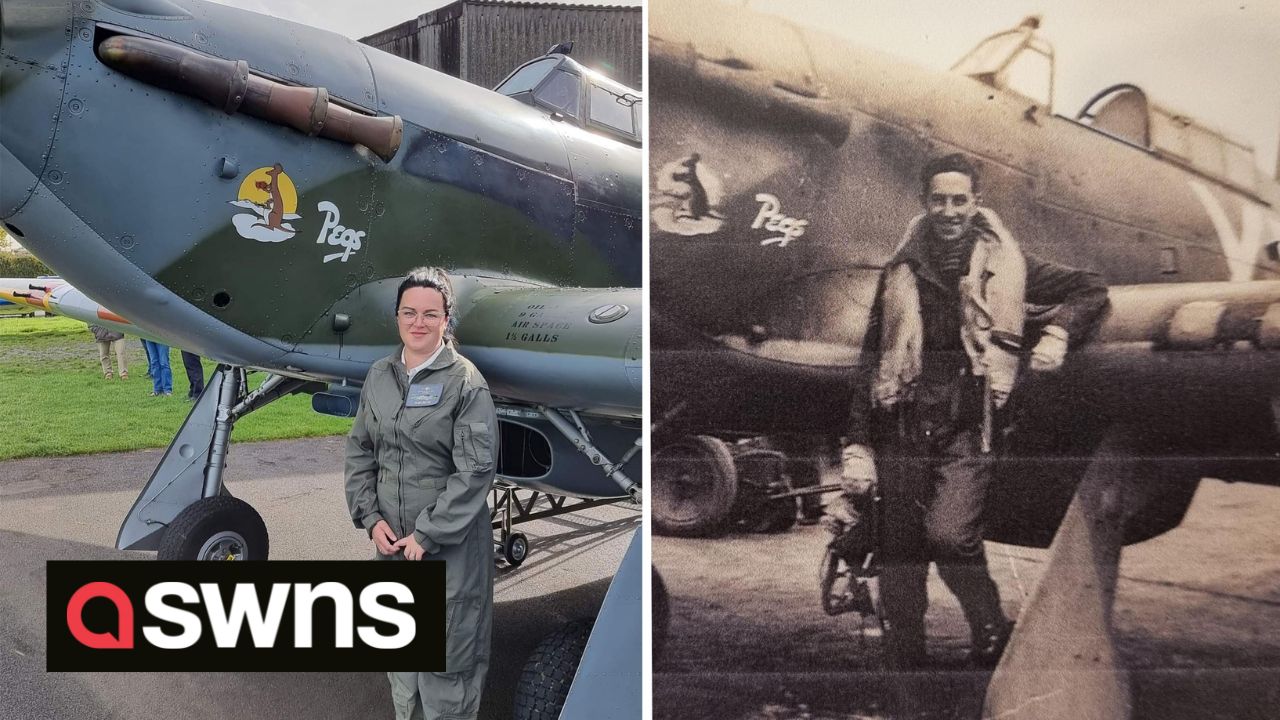 A woman flew in her late grandfather’s restored WW2 RAF plane after she traced it on the other side of the world – and recreated her favorite photo. Courtney Dohnt, 38, was never able to meet her grandfather, Charles Bryce Watson, who fought alongside the Brits in a Hawker Hurricane. The plane, named Pegs, after his beloved wife Peggy, was shot down during a raid on German-occupied Dieppe, France, in August 1942.

Charles was captured as a prisoner of war for four years, and his plane sank – but his stories lived on through Courtney’s family. A photo of him alongside the plane had a prominent place in their home in Geelong, Victoria, Australia. His family heard about a Hawker Hurricane being restored in Maidenhead, Berkshire, and got in touch to learn more about the plane.

They were astonished when they discovered the restorers had coincidentally used Charles ‘Pegs’ tag on the paintwork, along with the kangaroo logo from his original. The Australian-born Charles was part of RAF Squadron no. 174 based at RAF Manston in northeast Kent during the Second World War, fighting alongside the Allied forces. His original Hurricane, Pegs, also featured an image of a boxing kangaroo to represent his Australian background – but was shot down.

Courtney flew to the UK from Australia to have a flight in the incredible plane, on October 17, which is used for commemorative flights in the UK. She replicated the photo taken during the war of Charles, who died of a heart attack in 1963. Courtney said: “I was so excited when I heard about the plane. I jumped at the chance to see it. I went to visit as I was over in the UK for a wedding, and I couldn’t quite believe it. It was so overwhelming to be able to see that plane, with ‘Pegs’ on the side for my grandmother, just like in the photo of Charles. That picture was on our wall in our home as I grew up, so this experience hit me like a tonne of bricks.”

Courtney, who came over to visit the UK with husband Ross Dohnt, 38, grew up hearing stories of Charles’ impressive war efforts. He never had the chance to say goodbye to Pegs (the plane) before his death in 1963. But the picture of Charles stood next to Pegs was a permanent feature in Courtney’s home – like a part of the family – and was always admired by his real-life widow, Peggy. So when Courtney heard of a Hawker Hurricane being restored back in the UK, it was an opportunity for her to learn a bit more about her grandfather. She got in touch with the restoration company, Hurricane Heritage, and learned that they had found an identical model to her grandfather’s.

Courtney said they chose his plane because they loved the imagery of the boxing kangaroo and the name ‘Pegs’ – but didn’t know where they found photos to copy. Courtney said: “I actually only expected to go in and look at it – I jumped at the chance. I didn’t even expect a response. I’m just a random person on the other side of the world reaching out, but they were thrilled to hear from me.”

It coincided with visiting the UK for a friend’s wedding, so it didn’t take long until Courtney was on her way to Maidenhead. When she got there, to her amazement, they even offered to take her out for a ride in Pegs – after she replicated the treasured family photo of Charles beside it.

She said: “A pilot flew me out, and a spitfire pilot even flew out with us in formation. He flew beside us like a cat and mouse. We were doing barrel rolls, loops, and going upside down – I was proud that I didn’t throw up! But it was the most amazing experience as soon as I got there and saw ‘Pegs’ on the side. I got to not only see but fly in my grandfather’s RAF plane – how many people get the chance to do that?!”