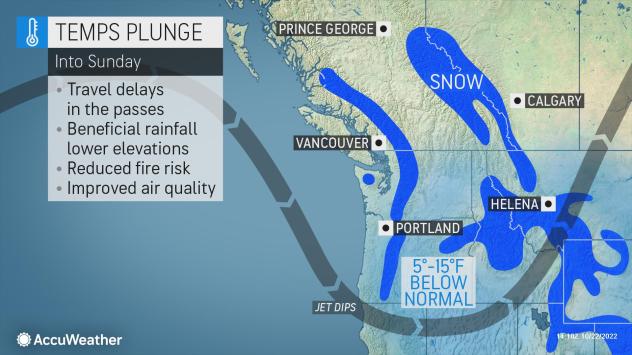 A potent storm is set to start a big change to many in the western United States by bringing some their first accumulating snow of the season.

In recent days, much of the Northwest and northern Rockies have felt more like late summer rather than autumn. On Thursday, temperatures reached the 70s F in Spokane, Washington and soared to around 80 degrees in cities like Bend, Oregon, and Reno, Nevada, temperatures that are more than 15 degrees above normal for October.

Now, AccuWeather meteorologists say that a drastic change is on the way in the coming days.

“A major flip in the weather pattern will erase the recent warmth across the region and replace it with a more winterlike feel,” said AccuWeather Meteorologist Brandon Buckingham.

The arrival of a new storm has sent temperatures plunging for the start of the weekend across the Northwest. High temperatures are expected to be in the 40s and 50s, while snow began to fall across the highest elevations of Idaho and western Montana on Saturday.

The same storm also brought rain on Saturday morning, from Washington to Nevada and Utah.

As colder air, packed with this moisture from the Pacific, rolls southeastward over the Rockies and helps to fuel the storm over the Plains, freezing levels will lower over the mountainous terrain. This drop in temperature will change rain to snow over the ridges and peaks to intermediate levels from Saturday night to Monday.

Several inches of snow is expected to be widespread from the Canadian Rockies to as far east as the Dakotas and as far south as southern Colorado.

A general 6-12 inches of snow is expected across the region, with an AccuWeather Local StormMax™ 30 inches possible in portions of the Wasatch in Utah, the Rockies in Colorado, the Tetons in Wyoming and the Sawtooth Range in Idaho.

Some of the larger cities across the West can expect snow to mix with rain for a time, including in Salt Lake City and Denver; however, the air is likely too warm for more than a quick coating of snow. Should snow accumulate in either city, it would be the first accumulating snow of the season.

With the stormy weather will come some notable hazards, especially for travel. Motorists should expect delays along with the possibility of road closures, including portions of interstates 70, 80, 90 and 94 and possibly along a stretch of Canada’s Highway 1 in the provinces of Manitoba and Saskatchewan due to the snow.

This could be especially true across the lower elevations of the northern Plains. While the amount of snow may be limited, a narrow area of heavy snow is likely. Blizzard conditions may occur in a part of this region where high winds combine with snow to reduce the visibility to 1/4 mile or less.

Travel may even be slowed by heavier downpours in the lower elevations, creating either wind-driven rain or reduced visibility.

Whether in the form of rain or snow, the precipitation will come as a benefit for many across the region. The surge of moisture is likely to help the drought conditions. All of Washington, Oregon and Idaho are abnormally dry, and more than 50% of each state is in at least a moderate drought, according to the U.S. Drought Monitor.

As the storm moves east into the Plains, it will bring additional threats, such as gusty winds and severe thunderstorms. Both the wind and lightning threats over yet another dry area of the country could bring an increased fire threat until the storm passes.

«Previous Post
Halloween Forecast Looks Soggy For Some, A Treat For Others»Next Post
Rain, Severe Storms To Sweep Southern US