Halloween Forecast Looks Soggy For Some, A Treat For Others 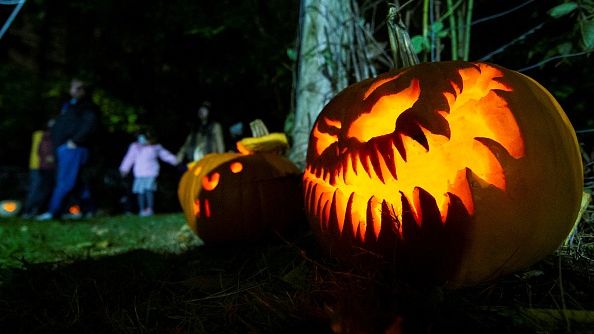 People look at Jack-O-Lanterns during a pumpkin parade event in Whiteoaks Park in Mississauga, Ontario, Canada, on Nov. 1, 2021. As an annual post-Halloween tradition, pumpkin parades returned to Ontario this year. ZOU ZHENG/XINHUA VIA GETTY IMAGES

The Halloween season is nearing its peak with carved pumpkins illuminating sidewalk stoops, skeleton decorations pieced together in leaf-covered lawns and teeth-chattering weather starting to chill parts of the United States.

Young masqueraders going door-to-door to collect candy in the coming nights to celebrate Halloween will want to check the AccuWeather forecast, since waterproof costumes will be a necessity in some corners of the country.A

An extra layer or two may be needed under costumes to stay warm while trick-or-treating in other areas.

Spells of rain are predicted in some of the country’s largest cities, but a repeat of the monster snowstorm of 2011 or the Halloween ice storm of 1991 is not expected.

A dry start to the Halloween weekend is foreseen for millions of residents across the East Coast, but like a vampire transforming into a bat, the weather will eventually evolve Sunday and Monday.

Rain showers are in the forecast from Bat Cave, North Carolina, to Spider, Kentucky, and northward into Sleepy Hollow, New York.

A total washout is not currently expected; however, if the disturbance responsible for the showers strengthens, it could lead to heavier rain that could force some towns to postpone or cancel Halloween festivities. Wet weather can also ruin some outdoor decor, including spiderwebs and fake cardboard tombstones.

It may even be a damp day in Hell, Michigan, with showers spreading across the Ohio Valley and into the Great Lakes Monday.

Umbrellas may be enough to stay dry in areas where lighter, spottier showers occur, but anyone that is planning to wear a costume that requires the use of batteries, such as an inflatable outfit that requires a portable fan, should take extra precautions.

Much better trick-or-treating weather is predicted for folks across the nation’s heartland with widespread dry and mild conditions in the cards through the weekend and into Monday.

A coat or sweater may still be needed for parents accompanying young candy collectors with temperatures from Pumpkin Center, Oklahoma, through Frankenstein, Missouri, predicted to drop into the 50s and 40s °F after sunset.

While this may be chilly for some, it is an improvement over the weather across the northern Plains Monday, Oct. 24, when snow fell in regions of North Dakota, South Dakota, eastern Montana, Wyoming and the Front Range of Colorado.

Children across the West Coast dressing up as witches and wizards may want to consult the AccuWeather app rather than the crystal ball when looking into the future, as stormy weather is in the forecast for the final days of October.

It has not rained on Halloween in Portland or Salem, Oregon, or in Seattle since 2018, but the streak of rain-free Halloweens is likely to come to an end this year.

A parade of storms will drench the Pacific Northwest in the coming days, soaking many outdoor Halloween festivities throughout the weekend and into Monday.

The spells of wet weather might not be limited to the Pacific Northwest. There are some indications that rain showers could dip southward into Northern California, with precipitation possible in Devils Elbow, California, located about 70 miles northwest of Sacramento.

Rain and high-elevation snow could also spread across the northern Rockies throughout the weekend and into Halloween, including Devils Tower and Casper, Wyoming.

Drier but chilly conditions are in the offing for the remainder of the western U.S., with temperatures near to slightly below typical late-October levels. This includes Death Valley, California, through Tombstone, Arizona, and everywhere in-between.