Tropical Rainstorm To Soak Part Of Northeastern US 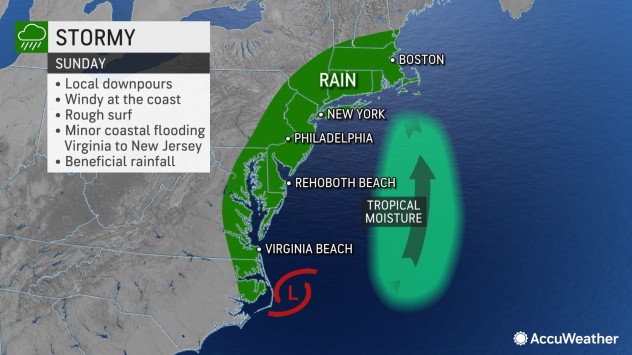 A coastal storm full of tropical moisture is poised to unload drenching rain and trigger gusty winds in southern New England and along part of the mid-Atlantic coast, AccuWeather meteorologists say.

The storm will arrive following a spectacular start to the autumn weekend. For people living along or venturing to the mid-Atlantic coast and southern New England, Saturday will easily be the better of the two weekend days for outdoor plans.

Conditions will start to deteriorate on Sunday, but how wet and stormy the weather becomes will depend on the location and track of a low pressure area that AccuWeather meteorologists have dubbed a tropical rainstorm.

Regardless of whether the storm acquires enough characteristics to be dubbed a tropical or subtropical storm, it is likely to bring weather conditions and impacts similar to such a storm in part of the Northeast, forecasters say.

“The storm will be far from a powerhouse, but it can take advantage of the difference from high pressure over the interior Northeast and low pressure over the Atlantic,” AccuWeather Senior Meteorologist Dave Dombek said. “In this case, a stiffening wind can harness the Atlantic moisture and some tropical moisture that originated from as far away as the Caribbean and the eastern Pacific and help squeeze out locally heavy rainfall.”

The heaviest and steadiest rain is likely to fall on southeastern New England and eastern Long Island, New York. These areas will get needed drought relief but may also experience localized flash flooding.

A general 1-2 inches of rain is anticipated in those areas and an AccuWeather Local StormMax™ of 5 inches could be measured in some spots. Leaves on the ground could cause drains to become blocked and lead to roads and sidewalks becoming extra slick, forecasters warn.

These same areas in New England and on Long Island are also most likely to have some issues due to coastal flooding at times of high tide and perhaps beach erosion. Astronomical tides will be slightly elevated with the combined effects of the storm and the new moon next week. Wind gusts may even become strong enough to lead to sporadic power outages.

Northeasterly breezes will push some Atlantic Ocean water westward toward the shoreline and into the back bays. As a result, minor coastal flooding at times of high tide can occur from North Carolina to the New York City area.

Some pockets of rain are likely to extend as far to the west as New York City and much of eastern New York, New Jersey, Delaware, eastern Pennsylvania, eastern Maryland, southeastern Virginia and part of northeastern North Carolina.

There are still a couple of ways the storm could unfold, AccuWeather meteorologists say.

If the storm were to strengthen dramatically and/or track farther to the west, then the rain would become heavier and steadier in much of the mid-Atlantic and as far west as the central Appalachians. Should the storm remain weak and/or track even farther to the east than anticipated, rain may fail to reach the Interstate 95 zone from western Connecticut to Virginia.

Chilly rain could be a factor in baseball and football games across the region. There is a chance that rain could affect both Major League Baseball championship series in Philadelphia and New York City on Sunday. Rain is also possible for Sunday’s NFL games in Maryland between the Baltimore Ravens and Cleveland Browns and the Green Bay Packers and Washington Commanders. Rain could linger into Monday night at Foxboro, Massachusetts, when the New England Patriots host the Chicago Bears.

Once clouds and rain move into the mid-Atlantic and New England regions, they may not be in a hurry to leave.

That storm could bring rain to areas in the Mississippi Valley that avoid a massive storm forecast to affect the Rockies and High Plains from Sunday to Monday. Some of the energy from the new storm will be associated with Roslyn, a tropical system in the tropical eastern Pacific.

Looking farther ahead, the tropical weather pattern on the Atlantic coast could be repeated prior to the end of the month, according to AccuWeather Meteorologist Alex DaSilva. However, rain from any tropical system may not necessarily reach as far north as the Northeastern states.