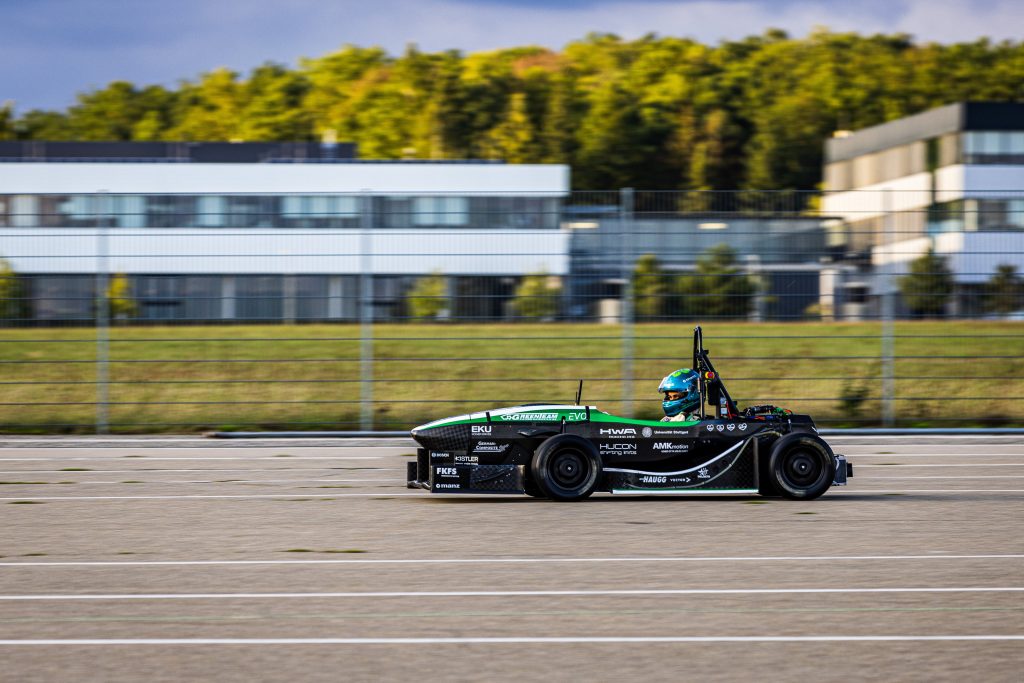 Photo by Maximilian Partenfelder/Greenteam via SWNS

A tiny car has broken a big record – by becoming the fastest accelerating electric vehicle. Twenty students from the University of Stuttgart saw their self-built vehicle go from zero to 100 kph in 1.461 seconds.

Weighing just under 145 kilograms, the GreenTeams’ carbon racing car exerts forces similar to those of a rocket returning to Earth. The students had been forced to cancel a first attempt in early September, due to technical problems, but were finally able to make their attempt on September 23. Guinness World Records this month confirmed the world record.

“The car puts a maximum output of 180 kilowatts on the road thanks to the four-wheel drive with motors developed at the university and a newly designed high-voltage battery pack,” a spokesperson said. “Due to the low vehicle weight, this corresponds to 1750 hp per ton. The vehicle can thus achieve a peak acceleration of 2.5g, which is roughly equivalent to the force experienced by astronauts when a rocket re-enters the Earth’s atmosphere.”

The students themselves experienced that such forces and the path to breaking a world record are full of challenges. During a test run for the attempt, the vehicle broke away at high speed and crashed into a stack of tires that served as a track barrier. Pavel Povolni, first chairman of the Förderverein GreenTeam Uni Stuttgart e.V., said: “Fortunately, the driver was unharmed, but the vehicle suffered enormous damage.”

In 2012, the GreenTeam broke the record, with an acceleration from 0 to 100 kilometers (328100.00 feets) per hour in 2.681 seconds, thus bringing the record to Stuttgart for the first time. After this record was broken by teams from the Netherlands and Switzerland, the Stuttgart team managed to break the record again in 2015, setting a new best time of 1.779 seconds. In 2016, the Swiss team beat this with a time of 1.513 seconds. This has remained the record to beat ever since.

Professor Wolfram Ressel, Rector of the University of Stuttgart, congratulated the students on their success: “The University of Stuttgart is proud that the GreenTeam has succeeded in setting a new record for the acceleration of e-vehicles. “I’m really excited about what our students have accomplished. Studying at university not only means acquiring theoretical knowledge but also being able to apply it in practice. The GreenTeam’s commitment is an excellent example of how knowledge transfer can succeed.”