Roslyn Forms In East Pacific, On Track To Strike Mexico As Powerful Hurricane 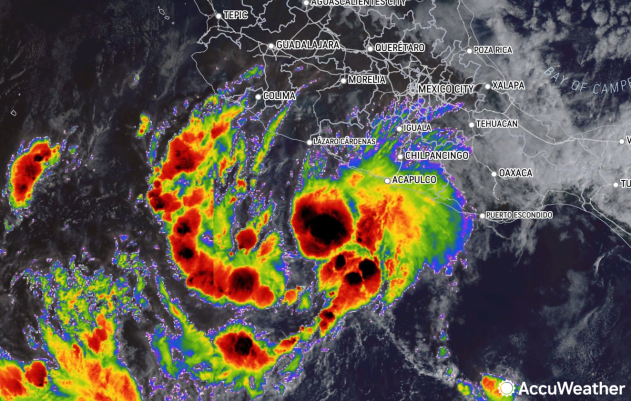 The brief break in tropical activity across the eastern Pacific Ocean has come to an end with the formation of Tropical Storm Roslyn south of Mexico. AccuWeather forecasters say the storm, the season’s 17th named system, can take a similar path to Orlene from earlier in the month, striking the western coast with heavy rain and damaging winds as a hurricane.

Roslyn, which originated as Tropical Depression 19-E on Wednesday evening, is the first named storm to roam the East Pacific since Julia, which crossed over from the Atlantic basin. The last storm to actually form in the basin was Tropical Storm Paine. Paine developed in the open waters of the Pacific during the first week of October and was never a threat to land.

Unlike Paine, forecasters say Roslyn poses a significant risk to portions of western Mexico. AccuWeather meteorologists have rated Roslyn a 2 for Mexico on the AccuWeather RealImpact™ Scale for Hurricanes based on the expected impacts from wind, rain and storm surge flooding.

The tropical storm is located in an environment where atmospheric factors are conducive for further development. “It is located in a zone of low, vertical wind shear and warm waters, which will aid in further strengthening to a hurricane by late week,” AccuWeather Senior Meteorologist Adam Douty explained.

This path is forecast to place the system on a crash course with the states of Sinaloa, Nayarit and Jalisco later this weekend into early next week.

AccuWeather forecasters are concerned it could reach Category 2 hurricane strength (maximum-sustained winds of 96-110 mph or 154-177 km (580737.00 feets)/h) on the Saffir-Simpson Hurricane Wind Scale before landfall.

“Regardless of the intensity of the system at landfall, flooding rain and mudslides are going to be a threat,” Douty cautioned.

The heaviest rain from the storm is forecast to arrive for portions of the Mexican coastline during the weekend as it begins its turn toward land. Drenching rainfall from this system will quickly raise flooding concerns, especially for areas that endured a direct hit from Hurricane Orlene in the first days of October.

Torrential rainfall can rapidly produce areas of flash flooding as well as force area streams and rivers to swell.

“The heavy rainfall can lead to life-threatening flooding, along with dangerous mudslides in the mountainous terrain,” said AccuWeather Meteorologist Jake Sojda.

“Winds of this magnitude can lead to widespread power outages, as well as damage to structures,” Sojda added.

Even ahead of direct impacts to land, rough seas and dangerous rip currents will be a significant concern for the rest of the week.

By early next week, Roslyn’s circulation is expected to be ripped apart by Mexico’s mountainous terrain. Forecasters say it’s possible some of the storm’s lingering moisture will be pulled into the south-central United States.

“A storm moving out of the Rockies will pick up some tropical moisture later this weekend into the following week,” AccuWeather Senior Meteorologist Bill Deger explained. This could result in some much-needed rain, which will include the risk of gusty thunderstorms, from Texas into the central Plains, he added.

«Previous Post
Massive Storm To Target Central US With Blizzard Conditions, High Winds And Severe Weather»Next Post
Halloween Forecast Looks Soggy For Some, A Treat For Others