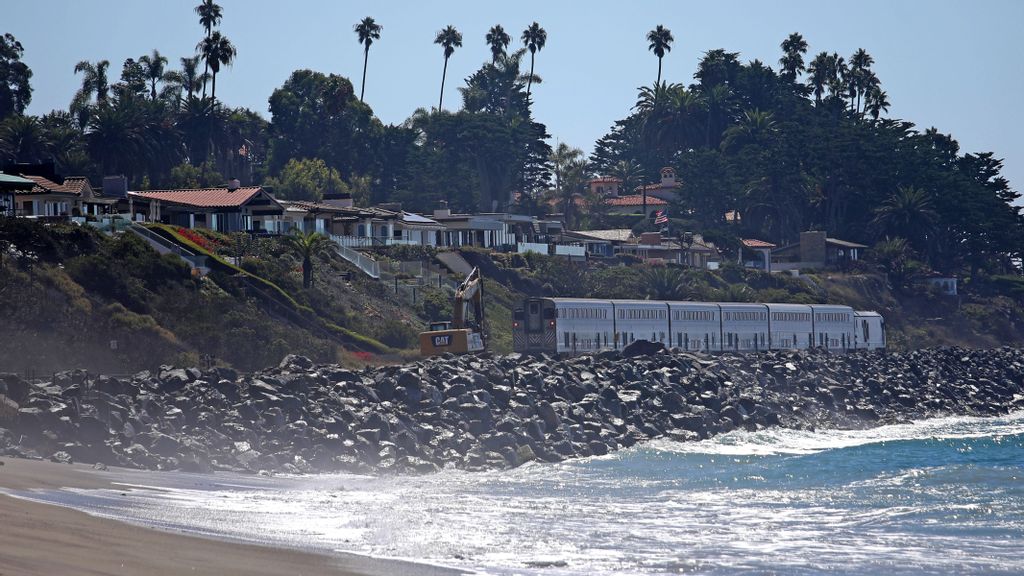 The Pacific Ocean’s powerful swells have reclaimed much of the Cyprus Shore community’s beachfront, which includes the passing of Amtrak’s Pacific Surfliner as one of its main attractions. The rail line offers uninterrupted picturesque views of the Southern California coastline to more than eight million passengers each year, AFP reported.

A portion of the tracks was closed for emergency repairs on Sept. 30, and at least two homes have been deemed uninhabitable due to the encroaching seawater.

“We don’t have a beach, we’re no longer a beach community,” Lang said. “It’s horrific. It’s like losing your best friend.”

The area has been stabilized for now. Tons of rock were dropped along the tracks to create a barrier and prevent water from taking over more of the land and the decks of the homes. However, authorities are aware there needs to be a long-term solution.

“While I understand the dropping of the riprap in the short term, it’s causing more and more sand erosion, and that’s making it harder and harder in the future to build back our beaches,” Chris Duncan, San Clemente mayor, told AFP.

Stefanie Sekich-Quinn, senior manager for Coast and Climate Initiative at the Surfrider Foundation, said blocking the natural flow of the sand could potentially harm the beach in the long run.

“There’s this really delicate balance between the land and the sea that creates the beach and when you have it blocked by infrastructure, you’re essentially starving the beach,” Sekich-Quinn told AFP.

Lang said waves as high as 6 feet caused a landslide in September 2021, condemning two homes and causing the railroad to close for preventative measures. But the area is still in danger a year later with one of the homes on the brink of collapse.

“About the lower third of the home has a crack in it, and it’s sliding towards the ocean,” Lang said.

It is estimated that the work on the railroad tracks through San Clemente will last several months and cost up to $12 million.

“This area here in Cyprus Shore is a microcosm,” Duncan said. “The entire California coast is threatened by climate change and threatened by coastal erosion.”