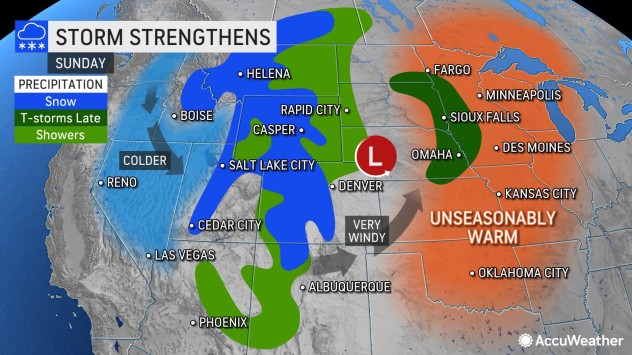 A substantial flip-flop in the weather pattern will allow a major storm to unfold smack dab in the middle of the United States this weekend and persist into early next week. The storm’s variety of adverse weather conditions could lead to a multitude of travel problems and will pose some risk to lives and property from the Rockies to the Great Plains, AccuWeather meteorologists warn.

Everything from strong, dry winds to severe thunderstorms capable of producing heavy rain, hail and even tornadoes will erupt in the southeastern zone of the developing storm where warmer air will be in place. However, on the storm’s northwestern flank, the combination of plunging temperatures, heavy snow and gusty winds may produce localized blizzard conditions.

A strong warming trend will accelerate well ahead of the developing storm over the Plains and Midwest into this weekend and in the wake of abnormally cold weather that made it feel like winter this week. A temperature rise of 50-70 degrees Fahrenheit will occur over a matter of a few days.

“The warmup will be accompanied by gusty south-to-southwest winds that will raise the risk of wildfire ignition and rapid spread,” AccuWeather Senior Meteorologist Brett Anderson said. “The winds can also kick up dust from the deserts and blow it hundreds of miles to the Great Plains.”

The strongest winds will develop as colder air from the Northwest begins to catch up with the warmth from the Southwest states to portions of the central and southern Plains by Sunday and Sunday night.

“In the zone from northeastern New Mexico and northwestern Texas to southeastern Colorado and central Kansas, frequent gusts will range from 60-80 mph with an AccuWeather Local StormMax™ of 90 mph,” Anderson said. At this intensity, trucks can be flipped over, property damage can occur and power lines may come down.

The same clash of warm and cold air combined with surging moisture from the Gulf of Mexico and a strong jet stream overhead will trigger severe thunderstorms from portions of the central Plains to the Upper Midwest late Sunday afternoon to Sunday night.

“The thunderstorm threat includes the full spectrum of severe weather ranging from localized flash flooding and large hail to the likelihood of powerful wind gusts and the potential for a few tornadoes,” AccuWeather Chief Meteorologist Jonathan Porter said.

High winds will be the most common threat from the storms, and gusts could approach 100 mph in some cases. Forecasters say there is a heightened risk with this incoming storm system because the majority of the storms may occur toward sunset and after dark Sunday night when they may be difficult to spot in advance.

The zone AccuWeather meteorologists have outlined as the greatest risk for severe weather extends from northeastern Kansas and northern Missouri to southern Minnesota.

As colder air packed with moisture from the Pacific rolls southeastward over the Rockies and helps to fuel the storm over the Plains, freezing levels will lower over the mountainous terrain to the point where snow works its way down from the ridges and peaks to intermediate levels from Saturday night to Monday.

Enough cold air and moisture are likely to be present to bring a general 6-12 inches of snow with local amounts to 30 inches in portions of the Wasatch in Utah, the Rockies in Colorado, the Tetons in Wyoming and the Sawtooth Range in Idaho.

There is a chance that snow could mix in with the rain in Salt Lake City, while progressively heavier snow falls on the intermediate elevations to the east and up into the ridges and peaks of the Wasatch from Saturday night to Sunday.

Much colder air may not sweep in fast enough to allow any significant snowfall in Denver on Sunday night. Farther to the north of the Mile High City and over some of the foothills to the west, rain could change to snow for a long enough time to allow a small accumulation.

As the storm intensifies over the Plains from Sunday night to Monday, it will take a more northerly track that allows colder air to sweep in at a faster pace over western portions of Nebraska and the Dakotas as well as the eastern portions of Montana and Wyoming.

Blizzard conditions may occur in a part of this region where high winds combine with snow to reduce the visibility to 1/4 mile or less.

Depending on the track of the storm and the magnitude of the cold air, towns such as Bismarck, North Dakota, and Rapid City, South Dakota, could be close to a developing zone of heavy snow and potent winds. Heavy snow is more likely to fall on the nearby Black Hills.

Motorists should expect delays along with the possibility of road closures, including portions of interstates 70, 80, 90 and 94 and possibly along a stretch of Canada’s Highway 1 in the provinces of Manitoba and Saskatchewan.

Because the heaviest rain and snow from the storm will be far removed from the main stem of the Mississippi River, it may take many weeks to months before levels on the waterway significantly rise. Water levels along many points of the vital water highway are historically low and can’t support normal barge traffic.

Since the storm is forecast to lift northward into Canada, severe impacts are not likely to spread across much of the rest of the Mississippi Valley and Eastern states. Some brief, heavy thunderstorms will be possible in part of the Midwest on Monday.

Another surge of moisture may spring up from Texas and could send rain and thunderstorms into parts of the south-central region during the middle of next week, AccuWeather meteorologists say.