Winterlike scenes unfolded across portions of the Upper Midwest as many residents woke up to snow. 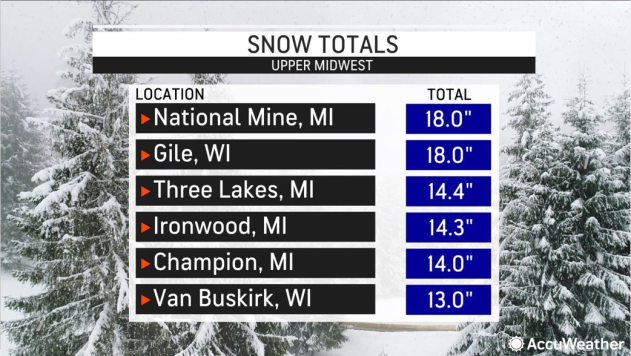 Winterlike scenes unfolded across portions of the Upper Midwest Tuesday morning as many residents woke up to fresh powder covering their Halloween decorations. Although parts of Minnesota and northern Wisconsin got their first snowflakes of the season late last week, a stronger blast of cold air brought snowflakes to the Chicagoland area for the first time this season.

Over the past 36 hours, snow has quickly piled up in Michigan’s Upper Peninsula as well as northern Wisconsin. As snow was winding down in that area Tuesday morning, the highest amount was observed near National Mine, Michigan, a town in Michigan’s Upper Peninsula, about 10 miles southwest of Marquette, Michigan, where 18 inches of snow were measured. On the Wisconsin-Michigan northern border, 18 inches of snow piled up in Gile, a small town in Wisconsin, and 14.3 inches accumulated in Ironwood, a town in Michigan.

Andes Tower Hills, a ski mountain in Kensington, Minnesota, which is northwest of Minneapolis, became one of the first ski resorts to open in the United States this season on Tuesday. With the help of frigid air and artificial snow, the mountain announced its opening with a video shared on Facebook on Oct. 17. In the video, the person making the announcement could be heard skiing down the hill while shouting, “Whoo hoo!”

In northern Michigan, meteorologists at the National Weather Service (NWS) office in Gaylord shared photos of the first snowman of the season outside their building.

Farther south, northern Indiana and far southwestern Michigan also picked up an early-season snowfall. The heaviest amounts totaled more than 3 inches. However, there were big differences in measured snowfall over short distances, and other nearby locations only had a light coating of snow on the ground Tuesday morning.

In the Chicagoland area, many residents saw their first snowflakes of the season. The early appearance of flurries was quite the change following last winter, which finished with little to no snow. No records were broken, but it was the earliest seasonal observation of snow since Oct. 4, 2014. The NWS office in Chicago said the earliest measurable snowfall, meaning at least 0.1 of an inch, was back in 2006, when 0.3 of an inch fell at the Chicago O’Hare International Airport, the official climate site for the region, on Oct. 12.

Just northwest of Chicago, Rockford, Illinois, recorded its first observed snow of the 2022-23 snowfall season. Typically, the first snow of the season in Rockford is around Oct. 31, but the climate site there has observed snow as early as Sept. 25, back in 1928, and Oct. 12, back in 1909.

In between Rockford and Chicago, one resident from Lake Zurich, Illinois, shared a video on Twitter of snow flurries falling in his backyard, despite the green grass that looked freshly cut and the green leaves on the trees in the background.

According to AccuWeather’s fall foliage map, the peak of fall foliage hasn’t occurred across Illinois yet, with most of the state experiencing the widespread color change.

Farther north, northern Michigan and northern Wisconsin areas are nearing or past peak. Because the trees across the northernmost regions of those two states haven’t shed all of their leaves yet, the wet and heavy snow weighed down many trees. Combined with gusty winds, this led to downed limbs, downed wires and thousands of power outages. In Michigan, more than 30,000 customers woke up in the dark on Tuesday afternoon, according to PowerOutage.US.

In the wake of the snow, an intrusion of cold made it feel more like December instead of mid-October, according to AccuWeather meteorologists. The cold air is expected to spread farther east through midweek.

Farther south, in Iowa, temperatures as low as 12 degrees F were reported in Le Mars, which is located in the northwestern corner of the state.

Combined with gusty winds, AccuWeather RealFeel® Temperatures were coming in even lower across the Midwest Tuesday morning. In the west-central part of Minnesota, the actual temperature was 11 degrees F in the city of Benson, but the RealFeel temperature was 3 degrees below zero.

According to AccuWeather Senior Meteorologists Paul Pastelok and Joseph Bauer, due to the forcing from a “stretched” polar vortex and high pressure in the West, a pocket of Arctic air, which originated over the Hudson Bay in northeastern Canada, was sent southwards over the continental U.S.

“When we get these first intrusions of more winterlike air in the Midwest, they are almost always accompanied by strong winds as well, and that has been the case over the last several days in the Midwest, with a few rounds of strong winds blowing across the Great Lakes, as a series of low pressure systems has drawn in increasingly cold air from the north,” AccuWeather Meteorologist Jake Sojda explained. “These strong winds stir up the Great Lakes and lead to rough and dangerous surf across the region.”