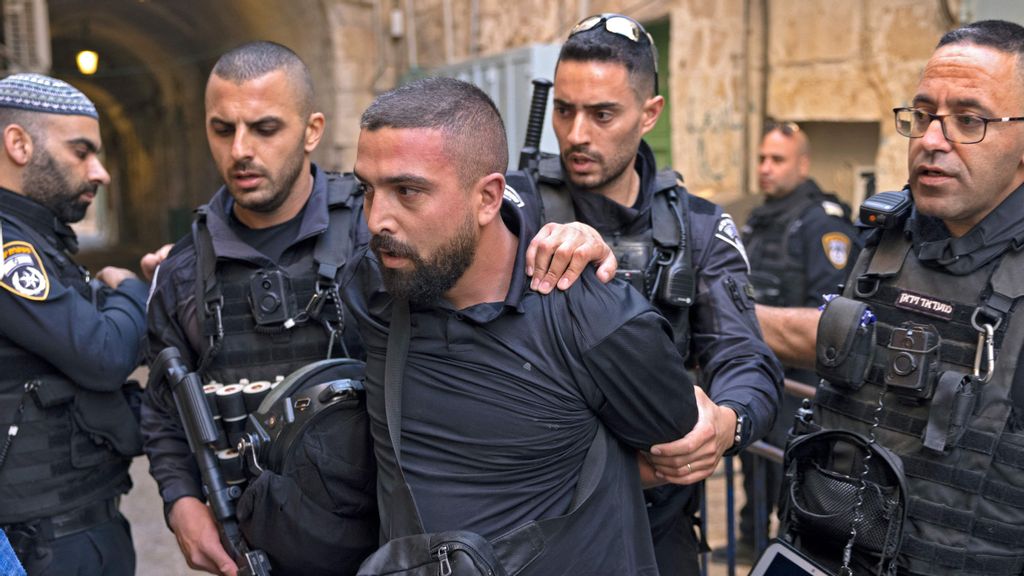 Israeli policemen detain a Palestinian man in the old city of Jerusalem on October 12, 2022, as the area is under high alert during the Jewish pilgrimage holiday of Sukkot, or the Feast of the Tabernacles. PHOTO BY MENAHEM KAHANA / AFP VIA GETTY IMAGES

Three Israeli citizens from the North were charged on Thursday with a range of severe security offenses, including spying for Hamas and gathering information on Israel’s Cellcom cellular network. The prosecution’s Cyber Division charged the defendants in the Central District Magistrate’s Court in Rishon Lezion with passing on significant quantities of sensitive information to Hamas terrorists in Turkey and forming a severe cyber threat to the Cellcom company, as part of preparations for a future military escalation, according to a joint statement from the Israel Police, state prosecutors and the Israel Security Agency.

According to the charge sheet, one of the defendants, who cannot be named, began working for Cellcom in 2004 as a software engineer, a role that provided him wide-ranging authority and access to computing systems. “Out of an ideological identification with the Hamas terror organization and its objectives, in 2017, while staying in Turkey, the defendant met with local Hamas elements,” said the charge sheet. The meeting was facilitated by an Israeli citizen who is a Hamas operative living in Turkey and Lebanon.

In line with Hamas’ requests, the defendant allegedly passed on sensitive information on Israeli communication infrastructure that he gained through his work and which is not publicly known. In 2021 and 2022, he again met with Hamas in Turkey, including with Bazam Akara, a senior Hamas military wing member, according to the indictment. The activity was coordinated by Hamas deputy political bureau chief Salah al-Arouri, who is known as “the commander of the West Bank sector” due to his role in orchestrating terror cells in Judea and Samaria. Meanwhile, the software engineer’s brother, also charged in the case, also maintained alleged contacts with senior Hamas members, passing on messages and attempting to help his brother conduct secure communications with the terrorist group away from Israeli intelligence surveillance.

A third defendant, also not named, worked as an external consultant for Cellcom on communications and computing networks, and allegedly passed on information to the first defendant on the company’s information security systems and ways of circumventing them. That would allow external infiltration of the company’s computer systems, and the information was passed on with the full knowledge that it would end up with Hamas in Turkey, the charge sheet states. “Terror organizations including Hamas are always trying to harm the integration of Arab Israelis in Israeli society and to cause them harm by exploiting their position to promote terror activities. This as Hamas senior members continue their life routines without disruption in various locations abroad,” Israeli security forces said in a statement.

«Previous Post
Israeli Defense Minister: “We Did Not Sell Weapons To Ukraine”»Next Post
A Lavender Farm Turns The Golan Purple