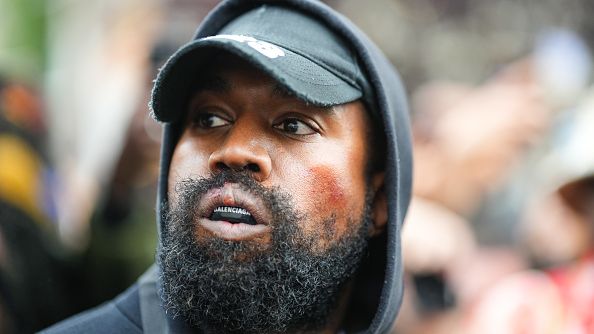 PARIS, FRANCE - OCTOBER 02: Kanye West aka Ye is seen wearing a Balenciaga boxing mouthguard in Paris, France, on October 2, 2022. It was outside Givenchy, during day seven of Paris Fashion Week. EDWARD BERTHELOT/GC IMAGES

After sparking outrage following multiple anti-Semitic outbursts, Kanye West clashed with NewsNation’s Chris Cuomo when the musician continued to double down on his comments.

In an interview Monday, West, who now goes by “Ye,” claimed that a “Jewish underground media mafia” is targeting him, that he doesn’t believe in the term “anti-Semitic,” and that today’s music industry is akin to “modern-day slavery.”

West claimed, once again, that Jews exert full control of the media while addressing his decision to wear a “White Lives Matter” T-shirt during a recent fashion show.

“When I wore the ‘White Lives Matter’ T-shirt, the Jewish underground media mafia already started attacking me,” he told Cuomo. “They canceled my four SoFi Stadium shows [in the Los Angeles suburb of Inglewood], right?”

They had the press—the same people, the outlets that when I was arguing with Pete Davidson and Trevor Noah, they called me an abuser for arguing with people about my ex-wife and my family, and when I get to see my kids and when I don’t.

“And they just immediately disrespect me, they keep the ‘crazy’ narrative going, they never call me a billionaire,” West continued. “We never talked about, even on this one right here, hey: tycoon, billionaire, visionary, inventor. These are never used.”

During the interview, with West calling in from the back of a poorly-lit vehicle, the rapper argued that the term “anti-Semitic” has allowed people “to get away with murder sometimes, literally.

“People always say, ‘I got screwed on a deal.’ Would that come as a surprise to you if I said, ‘Hey, a music exec screwed someone on our deal?’ Does that sound kind of like normal commonplace to you?” he added, before repeating the Black Hebrew Israelite belief that African-Americans are the true descendants of ancient Israelites.

West added that he does not believe in the term “anti-Semitic,” and that he cannot be an anti-Semite because “black people are also Jew, I classify as Jew also.”

In response to questions about his mental health, he said it was “unfair to make it be about, ‘Oh, are you taking care of yourself?’ “

The reason why I repeated it a bunch of times and for all of my friends that are in the entertainment energy industry that are black actors, black athletes and black musicians&mldr;there’s so many black musicians signed to Jewish record labels, and those Jewish record labels take ownership, not only of the publishing&mldr;but also ownership of the culture itself,” he continued.

“It’s like, ‘Oh, that’s mine.’ This guy signed to me. It’s like modern-day slavery. And I’m calling it out. That’s what ‘DEFCON three’ meant. I’m gonna call it out. It didn’t mean to wish any harm.”

Unlike other journalists who have interviewed West in recent days, Cuomo repeatedly pushed back against the musician’s anti-Semitic comments. “Look, there is no Jewish media cabal mafia. That is a figment of either your imagination or a projection of a prejudice,” Cuomo said.

“You may have had bad business dealings with people—it’s about those people. It’s not about their religion or faith. And I know that you’re intelligent and understand that when you target people because of their faith, other people may do so the same.”

West responded interrupting Cuomo: “They’ve been targeted before, they’ve been abused and killed because of what they believe and who they are. And I don’t tolerate it as a black person.”

“What you just said was that you’re trying to say that there isn’t a collective—over 50 percent of the executives and CEOs in Hollywood are Jewish. You can’t tell me what to do or feel.”

Cuomo responded, “That’s different than saying it’s a mafia and that they act as Jews in some way as opposed to just being businessmen.

One plays to a prejudice, the other one just plays to people and an ugly business which is what the record business is,” said Cuomo.