Historically Low Water Levels In The Mississippi Reveal Shipwreck From 1915

Patrick Ford was walking along the banks of the Mississippi River when he spotted the remains of an old shipwreck. 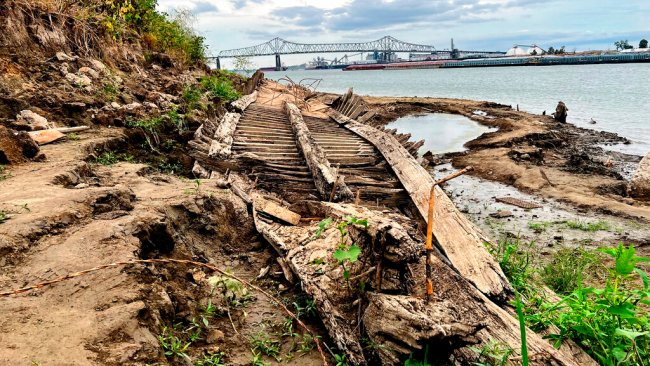 An investigation into the vessel has led archeologists to believe the ship may be the Brookhill Ferry, a ship that sank during a fierce storm in 1915, according to The Associated Press. It was used to ferry people and horse-drawn wagons across the river in the days before bridges were built, the AP reported.

Archeologists told the AP that they are working quickly to document the discovery while the water levels are still low — the result of a prolonged drought in the Midwest that has created record-low levels.

In fact, this is not the first time the ship has been spotted. The very tops of the ship were exposed in the 1990s. This time, about one-third of the boat is now visible above the shoreline near downtown Baton Rouge.

Low water levels in the Mississippi River have been approaching a historic low for the last week. At least eight barges have run aground due to the drop in water level, the AP reported.

With the passing of barges restricted by authorities, barge traffic on the river has been reduced by 39% compared to the previous five years. The U.S. Army Corps of Engineers normally moves between 30 and 40 barges at a time, attached to a single towboat, but that number has been cut down to only 25 barges due to the extremely low water levels, the AP reported.

The timing of the drought is impacting the most profitable season for farmers, according to reporting from AccuWeather National Reporter Emmy Victor.

“We are in the middle of the harvest season, and this is the most active time,” AccuWeather Senior Meteorologist Paul Pastelok said. “Barge trafficking is the heaviest means to transport agricultural products.”

“If this cannot be controlled, grains cannot get to the ports to transport to other countries,” Pastelok said, adding that it could hurt farmers and the overall U.S. economy.

The new views of the river have also caught visitors’ attention. Thousands in Missouri traveled to the Mississippi River on Sunday to explore the surroundings of the Tower Rock landmark on foot, which on any other day would have been an island within the main channel when water levels are normal.

AccuWeather Senior Meteorologist Alex Sosnowski said the river’s normal water levels will take some time to replenish because they don’t just depend on rainfall from states that the river borders but also on water levels of its many tributaries around the nation’s heartland.

The Missouri, Ohio, Arkansas and Illinois rivers are just some of the major contributors to the Mississippi, and drenching rain on one part of the basin may only slightly impact the main artery due to the river’s vast watershed.

“Any heavy rain that falls over some of the major tributaries could take days, weeks and even months to make a substantial positive impact on water levels miles downstream,” Sosnowski said.

Dry lakes and riverbeds have been revealing many hidden treasures. A severe drought that hit Utah’s Lake Powell and Lake Mead at the Hoover Dam led to some extraordinary discoveries, such as once-flooded hidden canyons, old railroad tracks and even exposed sedimentary rocks that hadn’t been seen in nearly a century. There were also some grim discoveries like the roughly five sets of human remains found in Lake Mead, the country’s largest man-made reservoir.