Deadly Floodwaters Rage Through The Venezuelan City Of Maracay

Deadly torrents of brown water rushed through the streets in Maracay, the capital of Venezuela’s northern state of Aragua. 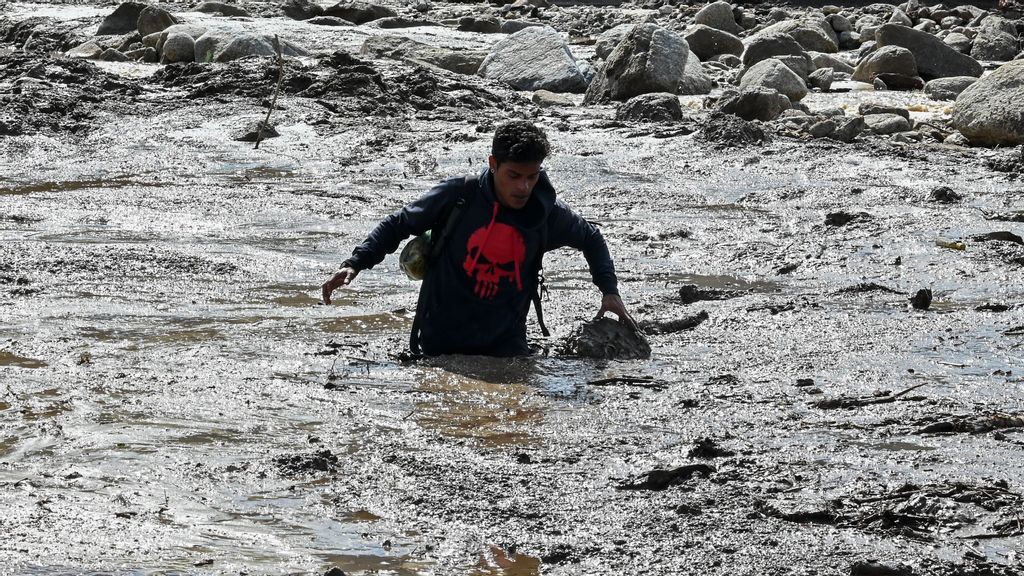 A man walks in deep mud and debris in El Castaño, a neighbourhood in Maracay, the capital of the Venezuela northern Aragua State, on October 18, 2022, a day after intense rain caused floods and a mudslide that killed at least three people. FEDERICO PARRA VIA GETTY IMAGES

Deadly torrents of brown water rushed through the streets in Maracay, the capital of Venezuela’s northern state of Aragua, on Monday after rain from a thunderstorm poured down on the city and created a huge landslide.

Venezuelan President Nicolas Maduro said on Monday that at least three people in El Castaño, a neighborhood in Maracay, have died from the landslide, Reuters reported. Those who died were among the dozens killed and hundreds who lost their homes from weeks of intense rain throughout the region.

While no weather-reporting sites in Maracay recorded precipitation on Monday, the deadly landslide was likely a result of intense rain from an isolated thunderstorm in the mountains outside of the city, AccuWeather Senior Meteorologist Jason Nicholls explained.

The torrential downpour caused a dam to overflow, triggering a flash flood that washed away cars, large rocks and trees down a road in El Castaño. Al Jazeera reported that around 50 families were impacted, and many residents had to be rescued.

“I was looking towards the mountain. The rain was heavy. We heard a roar and then when I saw water coming in through the windows, I grabbed my folks and we climbed up,” 56-year-old Maracay resident Jose Dos Santos told AFP, Al Jazeera reported.

In a video shared on social media, a man was nearly swept away in his car as the waters raced through the streets. Angel Jesus Diaz Escobar recorded the intense moments the man was able to exit his vehicle before it was washed away.

Arturo Betancourt, a Maracay resident, told The Washington Post that if his van hadn’t stalled on his way home from work, he would have been caught in the dangerous floodwaters.

He said a mechanic recently fumbled the installation of a new GPS in his car, causing it to stall. A co-worker offered to drop Betancourt off closer to home, and he continued the rest of the way on foot. By the time Betancourt reached the street he would normally turn onto with his car, he was already soaked in water and could hear the racing floodwaters.

“I was drenched in water and getting stuck in the mud,” Betancourt said to The Post. “But, meanwhile, the landslide was gushing down the street I would’ve normally taken home. My car would’ve definitely been swept.”

Another resident, Nelida Rodriguez, told AFP that the landslide was “horrible.”

“I’ve lived here for 70 years and have never seen this,” Rodriguez said.

Nearly 30 miles to the east of Maracay, in the town of Las Tejerias, at least 54 people have died, and hundreds have lost their homes after heavy rains triggered several landslides. Officials warn the death toll could soar to 100 as the search for survivors continues.

And the precipitation is not expected to let up anytime soon. According to Nicholls, there will be continued possibilities for isolated thunderstorms in southern Venezuela and in the mountains of the country’s north-central and northwestern regions throughout the following week.

For some areas where the water has started receding, streets are covered in mud and debris, and what remains of some homes are caked in muck.

“The rain should not mean anguish for our people,” Juan Guaidó, who is recognized as Venezuela’s president by the United States, said on Twitter on Monday. “Natural disasters are inevitable, but we can prepare and learn from them.”