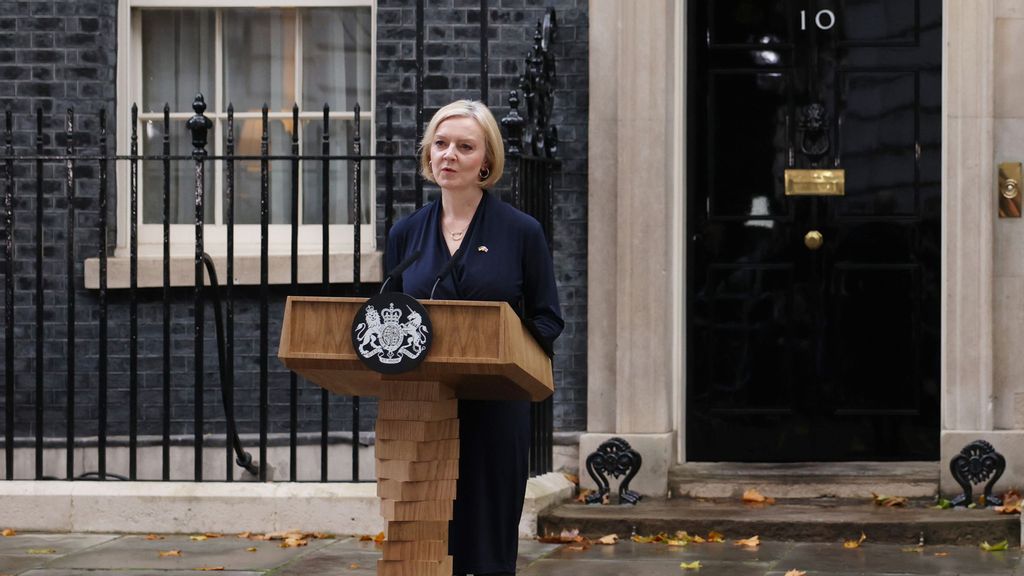 Prime Minister Liz Truss delivers her resignation speech at Downing Street on October 20, 2022 in London, England. Liz Truss has been the UK Prime Minister for just 44 days and has had a tumultuous time in office. PHOTO BY ROB PINNEY/GETTY IMAGES

Just 45 days after assuming her role as Prime Minister of the United Kingdom, Liz Truss announced her resignation on Thursday. Her announcement was preceded by a political firestorm set off by an economic plan that investors rejected, that compromised the strength of the pound and stocks, and that caused chaos within the Conservative Party. Truss, who goes down as the shortest-serving prime minister in Britain’s history, was under increasing pressure from colleagues following Wednesday’s resignation of Home Secretary, Suella Braverman, and after she sacked her finance minister last week, due to backlash over the “mini-budget” they had presented calling for deep unfunded corporate tax cuts.

“I came into office at a time of great economic and international instability.Families and businesses were worried about how to pay their bills. Putin’s illegal war in Ukraine threatens the security of our whole continent. And our country had been held back for too long by low economic growth. I was elected by the Conservative party with a mandate to change this. We delivered on energy bills and on cutting national insurance. And we set out a vision for a low-tax, high-growth economy that would take advantage of the freedoms of Brexit.” Truss said in her resignation statement on Thursday.

Truss won the vote to become Conservative Party leader on September 5th, and was sworn in a day later as prime minister, replacing Boris Johnson. In the September leadership election, Truss, then foreign secretary in Johnson’s Cabinet, received 57.4 percent of the vote among party members, while her opponent, former Chancellor of the Exchequer ,Rishi Sunak, garnered 42.6 percent of the vote. Sunak is now widely expected to be the front-runner to replace Truss, with other possible successors including current Chancellor of the Exchequer, Jeremy Hunt, leader of the House of Commons ,Penny Mordaunt, and Secretary of State for Defense, Ben Wallace.

“I recognise, though, given the situation, I cannot deliver the mandate on which I was elected by the Conservative party. I have therefore spoken to His Majesty the King to notify him that I am resigning as leader of the Conservative party.” she further said. “This morning I met the chair of the 1922 Committee, Sir Graham Brady. We have agreed there will be a leadership election to be completed in the next week. This will ensure we remain on a path to deliver our fiscal plans and maintain our country’s economic stability and national security. I will remain as prime minister until a successor has been chosen. Thank you.” she said in the concluding remarks.

The implications of Truss’ unprecedented short stint as prime minister are yet to be fully understood, but her resignation prompts questions regarding the stability of the Conservative Party and the entire British government.