For Kurdish Iranian Hawreh Haddadi, the brutality of the Iranian regime is nothing new. 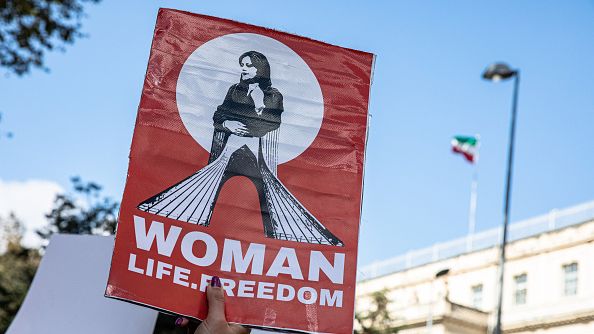 ISTANBUL, TURKEY - 2022/10/17: A protester holds a placard during a protest over the death of Iranian Mahsa Amini outside the Iranian Consulate in Istanbul, on October 17, 2022.  Mahsa Amini fell into a coma and died after being arrested in Tehran by the morality police. ONUR DOGMAN/SOPA IMAGES/LIGHTROCKET VIA GETTY IMAGES

For Kurdish Iranian Hawreh Haddadi, the brutality of the Iranian regime is nothing new.

The Maine-based author of “Finding Kurdistan: A Kurdish Iranian-American’s Journey Home”, believes that the answer, for the Kurds at least, is mutual solidarity. “If we’re not unified, the only winner is the Iranian government,” Haddadi says.

Iran has seen massive protests and riots since the death of 22 year-old Jina Amini – also known by her forced Farsi name “Mahsa” – on September 13. Jina, an ethnic Kurd, died in the custody of Iranian “morality police,” who had arrested her for wearing her hijab improperly.

While the police claimed she had died due to a preexisting health issue, her family has denied this. Like other minority groups in Iran, Kurds have faced enormous levels of discrimination, disproportionate arrests, executions and military attacks.

Amini’s death has sparked outrage in Iran as well as among the Iranian diaspora—not least of all, amongst the Kurds. In response to the protests, Iran has reportedly launched missile strikes into Iraqi Kurdistan.

Western countries, such as Canada, the European Union, the United Kingdom and the United States, have sanctioned Iran for these actions.

At a time when nuclear negotiations have stalled and Tehran is selling weapons to Russia for use in Ukraine, many are questioning whether the Iranian regime has much time left. “It is hard to see Westerners continue [nuclear] negotiations at this point, especially if the protests continue,” says Halmat Palani, a Vancouver-based Kurdish rights activist and writer for Kurdistan24.

“The documentation of their human rights abuses is tremendous. This isn’t just a protest anymore, it’s a revolution. And it’s not just a domestic revolution, but an international solidarity movement,” said Palani.

Like Haddadi, Palani has been following the situation of Kurds and other minority groups in Iran closely for years now. Both men believe that the international community, including diaspora Persians, has largely been ignoring the role played by minorities within the Islamic Republic, and the ongoing discrimination there.

Haddadi noted that the discrimination isn’t limited to Iran and the Kurdish territories. “I go with my fellow Kurds to these [anti-regime] protests, and we are often confronted by Persians who are angry and upset that we are highlighting the plight of the Kurds in Iran.

They see us as a ‘separatist’ threat … the media ignores this because Persians are given more of a platform when it comes to discussing Iran, so the Western assumption is that Iran is a country for Persians, when it really has always been a multi-ethnic country,” he said.

Palani says that Baloch demonstrators in the diaspora are also often met with angry and xenophobic reactions by Persian anti-regime activists, although he noted that some Persians do support the Kurdish cause.

Haddadi believes that Kurds in Iran are finally unifying to a degree, and that there is a great coming together of forces in the country in general. While many across historic Kurdistan remain afraid of being targeted by Iran, he said, there is great solidarity in the diaspora, in other parts of Kurdistan and among other minority groups who want to see change.

“We have seen protests in 2009 and some other years, but nothing to this degree,” he said. “Now, women are leading the protests, because they have been denied so many opportunities … Persians are seeing what the Kurds have been saying for 40 years—but the Kurds cannot stop the regime alone.”

What the future holds for Iran is the subject of much debate. A number of things have changed the dynamic recently. Iran is under pressure for selling weapons to Russia for use against Ukraine.

Haddadi believes that collapse is now inevitable, whether as a result of the current protest or not. “I am confident in saying … that even if these demonstrations are quashed, the coming months and years will see far bigger protests,” he said.

«Previous Post
Graffiti Of Medieval Knight Discovered In Jerusalem»Next Post
Israeli Defense Minister: “We Did Not Sell Weapons To Ukraine”