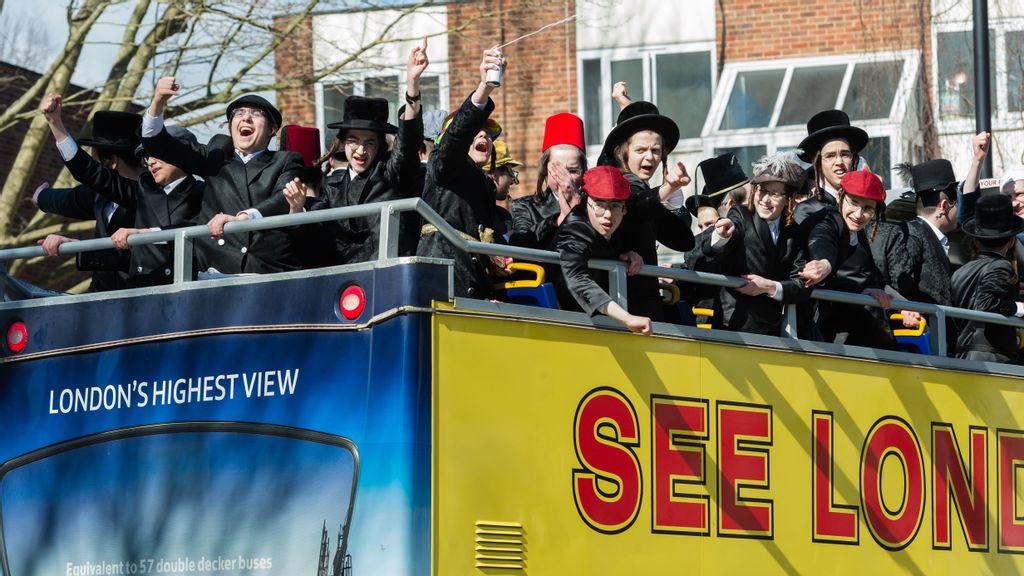 Orthodox Jewish men on double-decker bus celebrate the annual holiday of Purim on the streets of Stamford Hill in London, United Kingdom on March 17, 2022. PHOTO BY WIKTOR SZYMANOWICZ/ANADOLU AGENCY VIA GETTY IMAGES

Jewish groups in Britain are offering a reward of £30,000 (nearly $34,000) to find those responsible for an attack on a busload of Jewish teenagers in Central London during Chanukah last year. The move comes after the Metropolitan Police Service closed its investigation without identifying any suspects. The young passengers, a Chabad group of British Jews, and Israelis from northwest London, were on the bus on Oxford Street during holiday celebrations in November 2021 when a group of Arab men began yelling and banging on the vehicles. As video of the incident showed, the men attempted to break the windows and gave a Nazi salute. No one was injured in the attack and police began an investigation, calling the incident a hate crime.

In a statement given to the Jewish News in the U.K. earlier this month, the Metropolitan Police said they had received tips as to who the assailants were, however, “the only names provided in response to those appeals have been eliminated from our inquiries.” The identity of those involved is still unknown, and a decision was made in July to close the case. “Hate crime of any kind is unacceptable,” the police said in the statement. “Should new information come to light that provides a realistic line of inquiry, we will of course be willing to carry out further investigation.”

The decision to close the case promoted the Jewish News, the Jewish Chronicle and the Campaign Against Antisemitism (CAA) to offer a reward of £30,000, up from a previous offer of £10,000, for information leading to the conviction of the attackers. The Campaign Against Antisemitism released a statement and publicly expressed disappointment at the failure of the police service to bring the attackers to justice. “Despite the video going viral and all the resources at its disposal, the Metropolitan Police Service failed to make any arrests and quietly closed the investigation in July. If even high-profile hate crimes such as these are not solved and the perpetrators brought to justice, what hope do the many other anti-Semitic crimes against Jews have of being satisfactorily investigated?” their statement said.

According to a report on hate crimes in the United Kingdom released on Oct. 6, from March 2021 to March 2022 more than 1,900 incidents of hate were directed at the Jewish community in England and Wales.