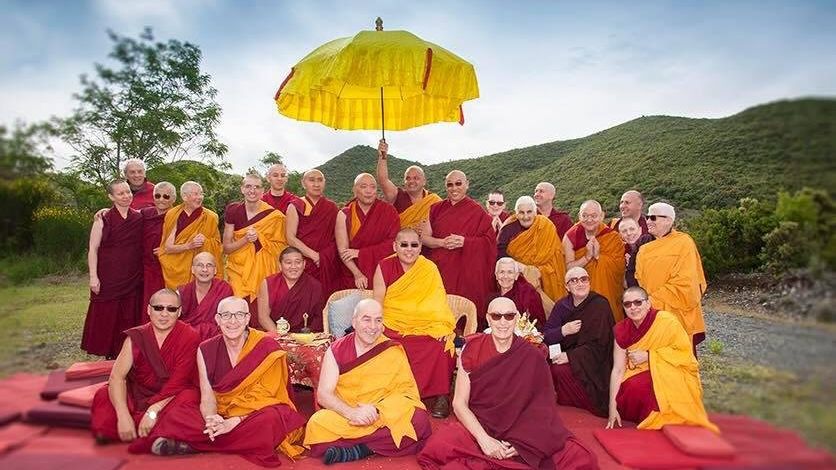 A group photo of monks at FPMT, with Rinpoche sitting in the center. Photo by Pierro Sirianni, courtesy of Peljor.

Tenzin Peljor a 54-year-old German-Buddhist monk lived in a dorm-sized room at Frankfurt’s Tibet House for over a year.  A Tibetan tapestry hung on a white wall, near his twin-sized bed blanketed in red and a white bookshelf lined with Buddhist texts The modest room  became a refuge for Peljor since his exile from his former Buddhist institution, the Foundation of the Preservation of Mahayana Teachings in 2019.

Peljor runs a popular Buddhist blog, Difficult Issues — Controversies Within Tibetan Buddhism, to address complicated issues in the religion, especially regarding abusive spiritual teachers. In May 2019, Peljor published on his website a petition created by a group of senior nuns. The nuns demanded that FPMT investigate allegations of sexual assault against one of its senior teachers, Dagri Rinpoche.

Shortly after Peljor posted the petition and other reports from FPMT on his blog, rumors spread that Peljor was a spy planted by a rival Buddhist organization. Fellow residents at an FPMT outpost in Tuscany, Italy, where he lived, soon began avoiding the monk. They even refused to sit with or talk to him. He eventually left.

“I’m a type of homeless person who lives here and there,” Peljor said.

Peljor’s blog has amassed approximately 2 million visits since its 2008 inception, and he isn’t the only critic in the Tibetan Buddhist community. There are Buddhist Project Sunishine and Beyond the Temple, two blogs that also share overlooked accounts of physical and sexual abuse in Buddhist communities.

These websites have become especially relevant after the #MeToo movement, as Peljor and others have cautioned readers about the dangers of Tibetan Buddhism’s emphasis on guru devotion. According to certain religious interpretations, once initiates take their vows, they must forevermore see their teachers’ actions as pure. If students speak or act against their gurus, they could risk Buddhist hell.

A monk but also a muckraker, Peljor has to strike a delicate balance: how to speak critically of the misuse of spiritual power, but also advance his own spiritual path. And it’s one he’s had to pay a price for — for decades.

AKalmyk-Mongolian teacher established the first Tibetan Buddhist center in New Jersey In 1958, Over a decade later, Tibetan Buddhism attracted a coterie of counter cultural figures and artists, even attracting luminaries like Allen Ginsberg. Today, at least 3 million Americans identify as Tibetan Buddhists, almost 1% of the population.

Though controversies around sexual and spiritual abuse aren’t unique to Tibetan Buddhism — Zen Buddhist groups have dealt with similar scandals for many years — what makes this branch of Buddhism unique is its emphasis on Tantric Buddhism, which promises followers a speedier but more difficult ascent to enlightenment.

Due to the challenges of the Tantric path, Buddhist texts like the lam-rim encourage students to rely on a qualified teacher to guide them on the spiritual path. After carefully choosing gurus with whom they will take vows, students must then see them as buddhas, or enlightened beings, and their every action as pure. Speaking and acting ill toward gurus could otherwise portend a Tantric hell.

Following reports of allegations that FPMT teacher Dagri Rinpoche had sexually assaulted his students, the director remained adamant that the accused teacher was a “holy being.” And he encouraged Rinpoche’s students to “rejoice, no matter what the world says.”

In a recent email, a spokesperson at FPMT wrote that Lama Zopa’s statement came out of a concern for the student-disciple relationship, and followed the lam-rim guidelines on guru devotion. A former victim of a guru’s absolute spiritual power, Peljor has criticized such a stance on guru devotion as black-and-white and fanatical.

Born in Berlin as Michael Jackel, Peljor was raised Catholic, but he claimed he wasn’t religious — until he began reading the Four Noble Truths to his ailing father every night. When he read the 227 vows listed at the end of the book, he said “What the hell? How could anyone live these vows?” But Peljor realized that becoming a monk was something he had always desired. “It was a strong thought which never left me,” he said.

Peljor at 29 spotted a flier advertising a meditation course by the New Kadampa Tradition In 1995. A Tibetan-Buddhist organization helmed by Kelsang Gyatso. He was intrigued. He moved into NKT’s residential centers, was ordained as a monk and donated whatever money, labor and time he could. Told that only the teachings of NKT’s head guru were pure, Peljor threw out any books he had by the Dalai Lama. Made to believe that any doubt he expressed towards his guru — Kelsang Gyatso, who recently passed away — would harm his chance of attaining enlightenment, Peljor was afraid to diverge from his teacher’s path. After five years, Peljor had zero savings, income or friends and little sense of who he was.

By the late 1990s, a U.K.-based organization known as INFORM — Information Network Focus on Religious Movements — that educates the public about minority religions had already begun receiving complaints from former members about NKT. Former followers of the Buddhist organization also reported that leaders were pressuring members to get ordained quickly, threatening the possibility of hell for those who didn’t properly follow the teachings, and exploiting volunteers’ free labor to aggressively acquire property. NKT was also threatening its critics with libel cases.

In an email, a secretary at NKT wrote that because Peljor was a member of a center in Germany that had separated from the group more than 20 years ago, he does not have any basis to comment on the NKT.But Peljor saw otherwise. He likens his five years at the organization to that of a frog being boiled: “the water a little hotter, a little hotter, until the frog doesn’t know he is cooked.” In 2000, Peljor finally left the group.

By 2008, Peljor had more or less healed. He called himself a cult survivor, moved on to a new spiritual teacher and was reordained — this time by the Dalai Lama. With a new name, Peljor experienced a rebirth and eventually joined the Foundation of the Preservation of Mahayana Teachings.

Peljor’s trauma from his years at the New Kadampa Tradition motivated him to educate Buddhists against the pitfalls he had fallen into during his prior spiritual path. So, in 2008, he launched a blog. One of the first entries Peljor published was a personal account of his five years at NKT. In response, NKT members called him a Stasi East German wolf in monk’s robe.

Peljor’s initial plans for the blog were quite limited; he only wanted to shed light on NKT. But in 2012, when victims accused the founder of Rigpa — another international Tibetan-Buddhist organization — of sexual assault, Peljor expanded the scope of his website.

INFORM Director Suzanne Newcombe said Peljor is an example of how the internet has made it easier for survivors of harmful groups to communicate with each other. To Newcombe and many Buddhists, Peljor’s blog is an antidote to the misuse of spiritual power — a way to provide information and community to victims who have been harmed by spiritual teachers and institutions.

Though Peljor doesn’t have an official editorial staff, he often relies on a small crew of five writers to operate the blog. They edit each other’s  works, assist in translations and deliberate on whether a particularly negative comment from a reader should be left on the website.

Having earned a reputation as a trusted voice on Tibetan Buddhism, Peljor rarely has to sleuth for his stories. Because of his wide network, information easily comes his way. For example, an acquaintance recently reached out to Peljor about a paternity test that confirmed that the Karmapa, the leader of the Kagyu school of Tibetan Buddhism, had fathered a child with a woman who had accused him of rape. Peljor did his due diligence and then published an article about the scandal.

A lot of the work Peljor does is to vet scoops and corroborate them. Even when I was interviewing Peljor, the blogger, unprompted, would share chains of emails to verify his story. He did the same when he was being ostracized at FPMT. He constantly updated his writers and friends with what was happening, and in doing so, also sought emotional reassurance.

Joanne Clark, a contributor to the blog and former Rigpa member, recounted how difficult Peljor’s period of ostracization at FPMT was. “He’s been attacked by every structure that he had from the Tibetan Buddhist community,” Clark said. “He doesn’t complain &mldr; but you can tell it was hard.”

Clark admired that despite having every reason to be skeptical and jaded, Peljor remained willfully optimistic and willing to see what was worth preserving in Tibetan-Buddhism — that he didn’t want to throw the baby out with the bath water.

Peljor’s work, though, isn’t without its critics. Some Buddhists have accused the blogger of deliberately attempting to break apart the community. Shortly after Peljor’s departure from FPMT, the Berlin-based Bodhicharya — where Peljor had been a resident monk and meditation teacher for years — also kicked him out. In members’ eyes, he was too much of a troublemaker, more invested in creating drama than following the spiritual path.

In an email Bodhicharya teacher Ringu Tulku wrote that Peljor believes in criticizing and saying bad things about almost every Lamas, using the term lama for Tibetan spiritual teachers. Despite these two expulsions, when I first met Peljor, he didn’t seem resentful. He was jovial, buoyant, even disarmingly humorous. When he described various accounts of ostracization, and even a lawsuit from another Buddhist group, his instinct was often to laugh it off.  Peljor does, however, admit to a sense of defeat — or at least of fatigue — as if the years of documenting countless controversies have taken a toll.

“I can’t do this all my life,” he said. But as issues keep sprouting up, as with his latest investigation into the Karmapa’s positive paternity test, Peljor realized he couldn’t leave — not yet. “If I don’t do anything, who will ever do something?” he said

While his work has made him unwelcome in some Buddhist institutions, Peljor is wary of calling his work political or identifying himself as an activist or journalist. I wondered if, in denying the politics of his work, Peljor was trying to protect the spiritual integrity of his work — perhaps even dispel the shame he has internalized. He noted that he can’t quite shake the feeling that his work as a blogger goes against the intuition of what a monk should or shouldn’t do. It’s as though he believes the two are irreconcilable paths.

Were it up to Peljor, he wouldn’t be writing about the muddy waters within Tibetan Buddhism. “I never ever wanted to have a website or blog whatsoever,” he said Instead, he would ideally devote his energy to his Buddhist studies and meditation, as well as write inspirational posts that encourage faith, rather than distrust.

That’s something Peljor may be able to do more of in his new apartment in Berlin — the first he has owned since 1996 — and where he has been teaching a meditation course. With a group of committed students, Peljor hopes to expand the operation and move it out of his home. And if there’s anything that Peljor could impart to his new students, it’s to maintain a healthy sense of him — and other gurus. There is, as he told me, no perfect teacher.