Why Talking Therapies Can Be Effective For Alzheimer’s Patients

An estimated one in every two dementia patients experiences depression which can reduce quality of life. 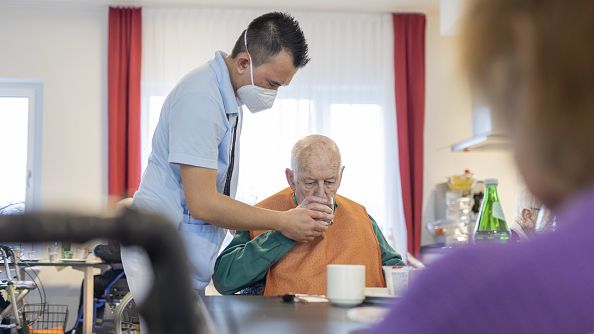 In this photo illustration a caregiver helps man to drink in nursing home in Heidelberg, Germany, on March 30, 2022. A new study suggests talking therapies can be very helpful for Alzhiemer's patients. GRABOWSKY/GETTY IMAGES

Talking treatments could be effective at combating Alzheimer’s, a study published in eClinicalMedicine, UK, says.

Almost four in 10 patients with mild symptoms are also affected by anxiety and depression. Cognitive behavioral therapy can relieve the symptoms.

This specialized counseling is used for a range of mental health problems, and focuses on how thoughts, beliefs and attitudes affect feelings and actions.

Lead author Georgia Bell, a PhD candidate at University College London, said: “Anxiety and depression are very common in people with dementia. They are extremely debilitating and associated with worse outcomes for both the person with dementia and their carers.”

Her team examined data from more than 2.5 million people who had clinically significant anxiety or depression. They completed a course of treatment via the national ‘Improving Access to Psychological Therapies (IAPT) service in England between 2012 and 2019.

Ms. Bell said: “Our findings suggest while people with dementia are less likely to improve or recover than those without dementia, psychological therapies offered in primary care mental health services can be beneficial for them.

“Consequently, our findings support the use of IAPT to treat anxiety and depression in people with dementia.”

Ms. Bell said added: “We hope this study will have implications for encouraging referrals and adaptations to increase access and enhance outcomes for people living with dementia.”

Results of trials into the effectiveness of anti-depressants have proven inconclusive. There is a pressing need to find effective treatments.

Participants of the study had clinical levels of depression or anxiety as measured using standard questionnaires.

They consider factors such as a lack of interest in doing things, issues with sleep and feelings of low mood or how much they worry or have trouble relaxing.

The researchers examined a subset of 1,549 individuals with a dementia diagnosis before starting IAPT treatment.

They were compared with 1,329 peers matched for age, gender and severity of symptoms.

About 40 percent recovered completely. In the control group, 70 percent of participants saw an improvement in symptoms.

Previously, there was limited evidence that talking therapies were adequately effective for people with dementia. The latest study backs a review by the same team earlier this year that confirmed their efficacy earlier.

Dr. Richard Oakley, associate director of research at Alzheimer’s Society which part-funded the study, said: “Many people living with dementia also have depression and anxiety, making it even harder for them and their carers to cope with symptoms and for some people even leading to a faster decline in memory and thinking problems.

“Consistent and accessible mental health support after a diagnosis is vital. This Alzheimer’s Society-funded research is the first study looking at the effectiveness of therapy for people living with dementia in a real-world setting.

“It showed that people living with dementia showed a significant improvement in symptoms of anxiety and depression when treated with therapy, even though their response wasn’t as strong as that shown in the general population.

“This research underpins the importance of timely access to mental health support, as revealed in our recent Left To Cope Alone report.

“We found 61% of people affected by dementia are currently in need of mental health support, and yet, in 2018, of 1 million annual referrals to Improving Access to Psychological Therapies services, just 0.2% were for people with dementia.

“Though this study didn’t compare the types of therapy, types of dementia, or if there were adaptations made for people living with the disease, it still highlights the urgent need to improve real-world therapy for those living with dementia – with adaptations to improve its effectiveness and accessibility.

“Alzheimer’s Society can provide advice, emotional support, and guidance for those living with, or affected by the condition.”