A complex storm will deliver rounds of heavy rain and thunderstorms from New Mexico through much of southeastern Texas. 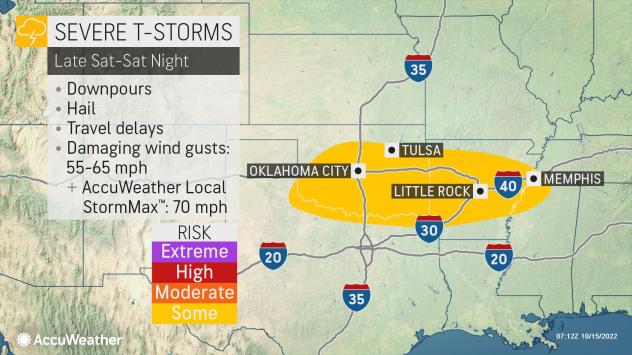 In several locations in Oklahoma and Arkansas, the cold front is predicted to cause severe thunderstorms later on Saturday into Saturday night. ACCUWEATHER

AccuWeather meteorologists are monitoring a complex storm that will deliver rounds of heavy rain and thunderstorms from New Mexico through much of southeastern Texas from Sunday through Tuesday, leading to zones of flash flooding at times while also helping to ease drought conditions.

A well-defined area of low pressure offshore of Mexico’s Baja Peninsula that has spawned some thundershower activity around Southern California in recent days is expected to finally eject eastward this weekend, crossing the Mexican border into Arizona during the day on Sunday. At the same time, a slow-moving cold front will drop southward through the central Plains into northern Texas, providing additional energy and moist flow from the Gulf of Mexico ahead of the front.

The aforementioned cold front is expected to produce severe thunderstorms in some communities across Oklahoma and Arkansas later Saturday into Saturday night. In addition to threatening wind and hail damage, significant rainfall from the storms can produce localized flooding, despite the parched nature of the ground.

“As the front stalls over the southern Plains region, the storm from Southern California will drift eastward,” AccuWeather Meteorologist Matt Benz said, underscoring the idea that repeated downpours from the pesky cold front will be enhanced by the energy from the Southern California disturbance.

These features will combine to create steady rain and an ongoing risk for flash flooding where any persistent swaths of rain happen to set up starting Sunday morning. Urban areas in particular will face difficult travel conditions and low-lying or typical poor drainage areas may become dangerous to traverse at times.

The highest rainfall totals appear likely to be confined to central and southern Texas near the Mexican border and along the coast, where 2-4 inches of rain is expected to fall before this storm dives southward into the Gulf of Mexico Tuesday night, with an AccuWeather Local StormMax™ of 7 inches. North and west of that area, a wide swath of 1-2 inches of rain is forecast from Albuquerque, New Mexico, to cities as far east as Dallas and even Houston.

Despite the threat of flooding, this rain will be beneficial in parts of Texas that have not had measurable rainfall since September.

After this storm pulls away, several days of dry weather are expected in the region, hopefully allowing ample time for any floodwaters to recede as sunshine returns and temperatures rebound late next week.