Orionids To Kick Off Prolonged Stretch Of Fall Meteor Showers

Four meteor showers are about to peak in less than one month’s time, a celestial series will kick off before the end of the week. 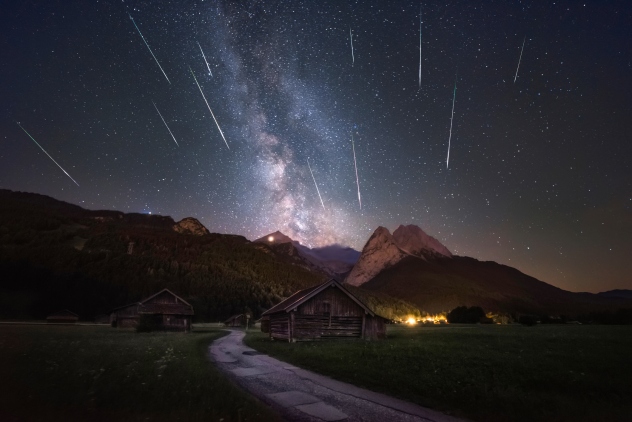 A meteor shower with the Milky Way, taken in Garmisch-Partenkirchen in the Alps. Shooting stars are stacked according to their positions in the sky to show the (opposite) radiant. DNEUTRAL HAN VIA GETTY IMAGES

Four meteor showers are about to peak in less than one month’s time, a celestial series that will kick off before the end of the week thanks to one of the most famous objects in the solar system.

The Orionid meteor shower peaks on the night of Thursday, Oct. 20, into the early morning of Friday, Nov. 21, as the Earth encounters a field of debris left behind by Halley’s Comet. The famous comet will not return to the inner solar system until 2061, but its previous orbits around the sun left behind a trail of cosmic dust and debris that will burn up in sensational fashion when colliding with Earth’s atmosphere this week.

Although the meteor shower is caused by Halley’s Comet, the annual light show is named after the constellation Orion, as meteors will appear to originate from the same area of the sky as the constellation.

Meteors may start to streak across the sky not long after nightfall Thursday, but they will be few and far between until after 10 p.m. local time when the radiant point rises with Orion in the southeastern sky.

The best time for viewing the Orionids will occur between 1 a.m. local time and daybreak, according to the American Meteor Society (AMS). During this time frame, as many as 20 meteors per hour may be seen from dark areas.

“The best way to see these meteors is to lie in a comfortable lounge chair with the back angled so that you are looking about halfway up in the sky,” the AMS explained. “You can look straight up if your sky near the horizon is brightly lit, but more meteors are seen in the lower half of the sky than straight up.”

Typically, the Perseid meteor shower is one of the best of the entire year, but this most recent edition peaked on the same night as a supermoon which outshined many of the shooting stars.

A crescent moon will rise around 3 a.m. local time Friday during the height of the Orionids, but it will not be nearly as disruptive as the supermoon that contested the Perseids.

Skywatchers could still have some trouble viewing his year’s edition of the Orionids, not because of the moon, but because of Mother Nature.

Most of the contiguous United States is predicted to have mainly clear skies Thursday night for the peak of the Orionids, although light pollution from cities and highways could still interfere with viewing conditions.

Clouds could be an issue for the interior Northeast, Midwest and the Pacific Northwest Thursday night into early Friday morning, but there should be enough breaks in the clouds for skywatchers to spot a few shooting stars, according to AccuWeather meteorologists. The areas at highest risk for a completely overcast sky include the northern Rockies, South Florida and northern New England.

Mostly cloudy conditions are also in the forecast for most of the Canadian Prairies and the St. Lawrence River Valley.

A trio of meteor showers will follow the Orionids, starting with the Southern Taurids and the Northern Taurids during the first half of November. Both events are long-running showers that peak over the span of several weeks rather than one specific night. During the first two weeks of the month, they will combine for around five to 10 meteors per hour on cloud-free nights.

For most skywatchers, five to 10 meteors per hour may not sound enticing, but the meteor showers may be worth a look as they are often rich in fireballs.

“There seems to be a seven-year periodicity with these fireballs,” the AMS said of the Northern Taurids. Fireballs were prevalent with the Taurids in 2008 and in 2015, so this year could feature the next outburst of incredibly bright meteors.

The Leonids will round out the list of upcoming meteor showers, peaking on the night of Thursday, Nov. 17, into the early hours of Friday, Nov. 18. Most years, the Leonids feature around 15 meteors per hour, but some astronomers suggest that it could exceed expectations this year with dozens to perhaps 100 meteors per hour, making it potentially the best meteor shower of 2022 if the forecast plays out.