As the water levels of the Mississippi River continued to fall, visitors flocked to the river to see the receding shoreline. 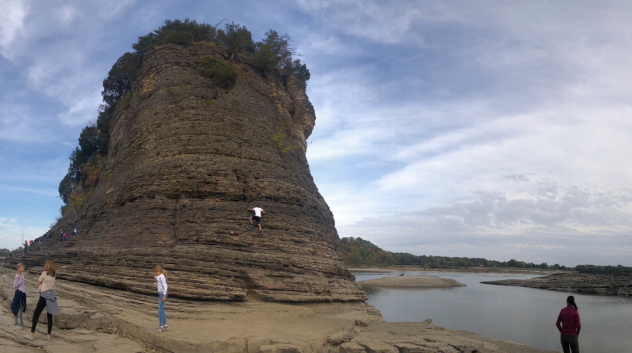 A person attempts to scale Tower Rock, which was an island in the Mississippi River before the water levels began to drop. LOGAN POOLE VIA LMS

As the water levels of the Mississippi River continued to fall due to a prolonged drought, visitors flocked to the river to see what the receding shoreline revealed.

On any other day before the water levels began to drop, Tower Rock would have been an island within the main channel, north of Cape Girardeau, Missouri. Now, however, a dry stretch of land allows visitors to walk to the once-isolated landmark.

Video of the parched river over the weekend showed people traversing the connecting piece of land that was once underwater. Kids ran around collecting rocks while other people snapped photos of the landscape or tried their hand at scaling Tower Rock.

Tower Rock, which was added to the National Register of Historic Places in 1970, can only be reached when the water level is below 1.5 feet at the Chester, Illinois, river gauge, according to the Missouri Department of Conservation. As of Monday, the water level at the gauge was 0.22 of a foot. It had consistently measured under the 1.5-foot threshold starting on the morning of Oct. 11 around midnight.

On Sunday, thousands of people had traveled toward the river, creating a massive traffic jam that stretched for miles.

Earlier in October, Michael Steenhoek, executive director of the Soy Transporation Coalition, told AccuWeather that concerns over the falling water levels began during the winter of 2021-2022 when there was a lack of snowfall over the Mississippi River basin.

“A lot of the water that you see on the lower Mississippi River, it originally starts as a snowflake in Montana,” he said, adding that the dearth of snowfall last winter “just continued to compound and of course summer we didn’t get much rainfall, so now we’re in the situation we’re in today.”

The receding shoreline continues along the river, and in Memphis, Tennessee, a large swath of the exposed riverbed could be seen from the observation deck of the Memphis Pyramid.

The water levels at Memphis dropped to the second lowest on record for the location, at -10.37 feet early Monday morning, according to the National Weather Service. As of Sunday, the water levels had dropped to the location’s lowest recording in a decade. As it crossed the -10-foot threshold Sunday night, it slowly began approaching its lowest water level record of -10.7 feet that was set on July 10, 1988.

The gauge reading isn’t a measurement of a river’s depth but an agreed-upon zero level rather than a riverbed, making it possible for water level readings to go into the negatives.