The father-son never imagined their boating, survival and swimming skills would all be put to the test. 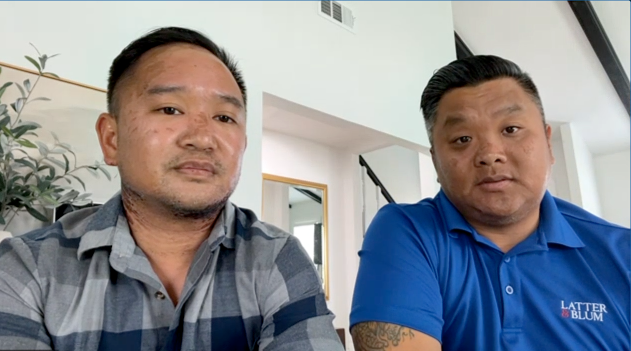 Luan Nguyen, Phong Le and Son Nguyen were just guys going fishing on a Saturday morning. They never imagined Oct. 8 would be the day their boating, survival and swimming skills would all be put to the test.

“The fishing trip actually started off as a regular fishing trip,” Le told AccuWeather National Weather Reporter Emmy Victor. However, by 10:30 a.m. they ended up in the water.

It was supposed to go smoothly. They said the plan was to go to Empire, Louisiana, fish for some red snapper and come back home to cook it. They knew they couldn’t take too long because the weather wasn’t looking optimal later that day.

“We knew that the weather was getting worse towards the afternoon, mid to late afternoon,” Le said. But it started changing way earlier than the friends expected, leaving them with no boat and trying to survive for 28 hours before any help arrived.

Both Le and Luan Nguyen had been fishing since they were kids. Le said he has even owned a boat for a decade now, but as waves got bigger and the wind started blowing, the boat took on water very quickly.

“We started taking water in the back of the boat,” Le said. “And by the time we noticed that, we were taking on too much water.”

In a matter of seconds, Le’s instinct made him take quick actions. He said he made the decision right then and there that the boat was not going to make it and life vests had to be put on.

An anecdote from an old friend who survived a similar situation played a vital role in Le’s thinking process. He knew ice chests, especially from the brand he and his friend had, were going to stay afloat.

“When the boat sank, we jumped into the water and swam toward the ice chests,” Le told AccuWeather. “That’s pretty much what really saved us. We grabbed both ice chests, tied them together and pretty much hung on for dear life.”

The next step was coming up with a plan for when the sun went down. Reaching to the oil rigs across the Gulf became the immediate goal, but Le said they soon discovered the currents near them were too strong to grab on to them. “We passed up four before nighttime,” Le said.

“If you get high enough on an oil rig, maybe somebody can see you, maybe you’ll get phone signal. We all had our phones on us,” Luan told AccuWeather.

Luan said they were persistent because this was the only way to get out of the water, the only thing that could almost guarantee their survival. Yet they were not able to get to any by 6:30 p.m., when the sun came down and the full moon rose up. That was the start of about 12 hours of darkness.

They ended up floating around all night, timing each other off and trying their best to keep each other warm.

Among the jellyfish stings every half an hour while swimming, Luan also experienced a shark attack that left him with no life preservers, just hanging to the ice chest and losing energy by the minute, but glad that the life vest was the only thing the shark teeth got a hold of.

“We’re just floating and then next thing you know, a shark just bites the life vest right in front of me, right here,” Luan said. “I’m face to face with it. The face of it is about 12 to 14 inches wide across.”

Despite the shock, Luan’s instinct took control of the situation.

“I try to push him, to get off, to go away. It doesn’t go anywhere. So I just take my thumbs and jammed his eyes and he just took off,” Luan shared.

Another bliss of hope was an anchor trip boat they saw the next morning. Le said he even let go of the group and of the ice chest this time as he realized he could gain more distance without it.

“Son told me not to do it,” Le said. “He didn’t want me to go, you know, but he had to stay back with Luan. And I left them early that morning to go towards the shrimp boat.”

After three to four hours of swimming by himself, Le said he saw there was smoke coming out of it and he just had to go the opposite direction. However, this was not his last hope as he was now “fairly close” to another oil rig.

Three more hours of swimming went by and the current started pushing against him, stopping him from reaching this rig as well. That’s when Le pulled out his phone to check his location on Apple Maps.

“It showed my location in the Gulf of Mexico,” Le said. “So I screenshotted it and I turned my phone off of airplane mode and text messages started coming in. So I caught some kind of signal being closer to that other oil rig.”

Le texted that screenshot to his friend Ben, as he had been the last to text him, as well as letting him know his boat had sunk and he was floating in the middle of the Gulf. Ben was quick to respond, but Le’s phone ran out of battery before any further communication could happen.

“That was my Hail Mary that was tossed out there,” Le told AccuWeather.

Within 30 minutes, Le started hearing helicopters and planes flying over them. The feeling of relief filled his body when he realized he didn’t need to push, swim or fight currents anymore, just wave and ensure they could see him.

Their rescue was streamed on live TV and involved about 30 people working behind the scenes to find them all.

For Luan, seeing a boat coming up to him and Son was a surprise. Luan said his sigh of relief came once he was pulled out of the water. Son, on the other hand, strained himself a lot being out there and is currently recovering back his strength, but he helped push the three of them along while in the water.

“Shoutout to him,” Le said referring to Son, and then added a number of other shoutouts including to the maker of the ice chests that he credited with saving their lives. “You know that was our Wilson in Cast Away.”

Ultimately, Le said his only goal was to save his friends, one way or another. They knew it would have been almost impossible for them to survive another night. Luan said he wouldn’t have made it.

The friends hope their story can serve as a reminder to others on the importance of going boating with the appropriate equipment and “a float plan,” as indicated by the Coast Guard, and to mainly never forget life vests — in particular brightly colored ones with reflectors — and ice chests.

“Just got to go to the Coast Guard website and they tell you exactly what you need to bring on the boat and then just have what they tell you. That will save your life,” Le said.