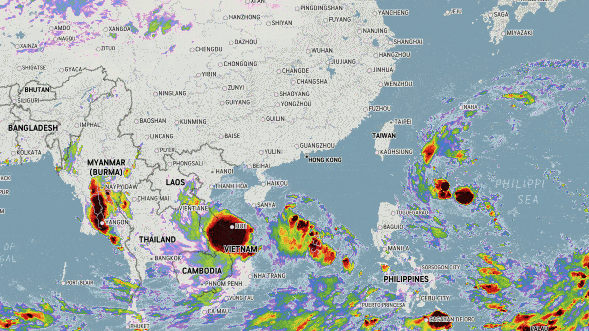 This animated gif shows Typhoon Nesat passing between the Philippines and Taiwan from 8 p.m. Oct. 12 and 8 p.m. Oct. 17. ACCUWEATHER

A powerful tropical cyclone brought flooding rainfall to the Philippines and Taiwan over the weekend. AccuWeather forecasters say some areas recorded staggering rainfall amounts in excess of several feet as Nesat, which was classified as a severe tropical storm at the time, tracked from the Philippine Sea into the South China Sea.

Raging floodwaters as a result of torrential rainfall turned roadways into rivers, caused damage to homes and forced hundreds of evacuations. Some of the heaviest rainfall targeted the northernmost portions of Luzon, the largest and most populated island of the Philippine archipelago, the grouping of small islands to the north of Luzon as well as eastern and northern areas of Taiwan.

Over 900 people in the northern Philippines were told to evacuate as the weekend began and Nesat, known as Neneng in the Philippines, approached, according to Reuters.

Video of dramatic rescue efforts emerged from the province of Cagayan, located in the far northeastern portion of Luzon, as rescuers fought against turbulent floodwaters to pull residents to safety. Rescuers were tied to a safety line and formed a human chain to prevent people from being swept away.

Nesat unleashed heavy rainfall over the northern Philippines as it made its closest approach to the Cagayan province Sunday. The Philippine Atmospheric, Geophysical and Astronomical Services Administration (PAGASA) said Nesat made landfall on Calayan Island, a small island in the Luzon Strait, early Sunday morning as a severe tropical storm.

Late Sunday, Nesat emerged fully into the South China Sea and strengthened into a powerful typhoon. The storm was located about 209 miles south of Hong Kong Monday afternoon EDT. Nesat will continue to track west across the South China Sea this week. Heavy rain will overspread portions of southern China and reach Vietnam by midweek, AccuWeather forecasters say.

Rainfall totals over the course of 72 hours reached astronomical levels as a result of Nesat, according to data from the Central Weather Bureau, Taiwan’s weather service.

One station in the Shilin District of Taipei City recorded a staggering 71.6 inches (1,818 mm (2.68 feets)) of rainfall from last Friday to Sunday. Dozens of other stations in the northern portion of Taiwan recorded rainfall amounts from 28-40 inches (700-1000 mm (3.28 feets)) over the same time frame.

While the highest totals in Taiwan were mainly confined to the highest elevation areas, torrential rainfall and flooding also affected heavily populated parts of the country.

On Sunday morning, eight people were rescued from a flooded bed and breakfast hotel in Yilan City, according to Taiwan News. Rescuers had to wade through waist-high floodwaters and deploy inflatable boats to take all eight patrons to safety.

AccuWeather forecasters say the nature of Nesat’s track limited the ultimate scope of its impacts. A track farther to the north or farther to the south could have placed hundreds of thousands of residents in jeopardy.

However, residents of the Philippines cannot breathe a sigh of relief just yet.

“There can be another round of heavy rain in these same areas late this week from a potential depression or storm,” AccuWeather Lead International Forecaster Jason Nicholls cautioned.