US Dad Moves His Family Into A 6,000-square-foot Nuclear Bunker

A father-of-four has moved his family into a nuclear bunker he bought for $300,000. He is renovating the bunker from scratch 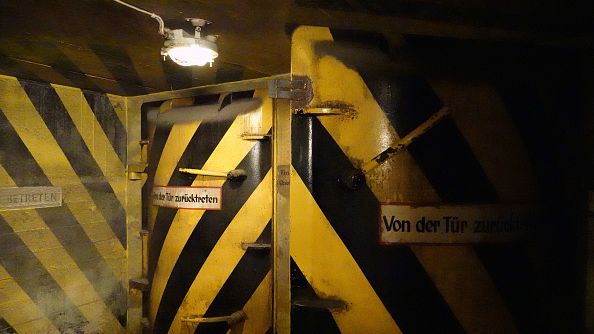 Entrance to the Steintor underground bunker, Hamburg, Germany, 25 July 2022. The inscription Stand back from the door can be read on the doors. (JULIAN WEBER/PICTURE ALLIANCE VIA GETTY IMAGES)

Ruben Romero, 46, bought the 60s bunker in early 2020, after many years of wanting a drastic change of pace. He wanted to get out of the suburbs of Georgia, US, which made him look into alternative living situations.

He toyed with the idea of moving his family to a deserted island – and even considered buying a submarine. He eventually decided on a bunker after falling in love with a fully-renovated one he found for sale.

Ruben, who works as a consultant, researched online and eventually contacted the owners of the bunker in the Midwest to see if they would be willing to sell.

Ruben moved into the bunker himself in July 2020. A month later, he was joined by his wife, Joan, 46, and his four children Eden, Enoch, Zion and Celestial.

Buying the property wasn’t easy, but Ruben and his family did everything they could to make it happen. He said: “It’s extremely hard to get a mortgage on a property as unique as this, so we had to find a workaround, but we decided to just make it work.”

That’s how we’ve been doing everything, he said.

“I still work full-time, and the kids are homeschooled, so we just find time when we can to work on the renovation. We are doing this all ourselves. We’ve had no outside help apart from the internet.

“Luckily, we are all very self-motivated, so we get on with it because we want to see it finished,” added Ruben.

The family of six have had to get used to the many quirks of living in an underground bunker. Every day they enter and leave through a 3000lbs blast-safe door and have to use a one-ton lift to get anything – even groceries – from the entrance to their living space.

The bunker came with several electrical systems that could lock the bunker or turn off the electricity at the flip of a switch, so they must carefully research everything before they touch any button or use any plug.

Renovating their new home has been a huge learning experience, and they frequently discover new things in the bunker and the surrounding 13 acres of land.

Ruben said: “The land is covered in 60-year-old markers that indicate something is underground, so we really need to excavate everything and make sure we know what we have on our property.

“A big issue has been radon – which is a radioactive gas that is found in basements and underground rooms.

“I’ve been sent so many suggestions on ways to change the space, things to eliminate this problem and fix that thing, but there’s no guarantee they would work in such a unique space.

“One was to insert a skylight, which I’m not going to do – I’m like 95% close to surviving a nuclear fallout, and we have the radon under control, why would I risk it?”, said Ruben.

Ruben doesn’t consider himself a ‘doomsday prepper’. But he finds some relief in knowing that he will be safe, just in case the worst does actually happen.

Children Eden and Enoch have taken over the family account on the social media app TikTok to share their family’s ambitious renovation.

The family had initially been posting to YouTube, but after their first video went viral they decided to upload their daily highs and lows to TikTok.

Ruben said: “I like the community that you get online. Though I do think my kids safeguard me from a lot of stuff – when I post my mistakes online, there can be a lot of attention.

“I don’t get social media 100% yet, but I’m enjoying the motivation it brings me. I need to get up and do things to make content,” added Ruben.