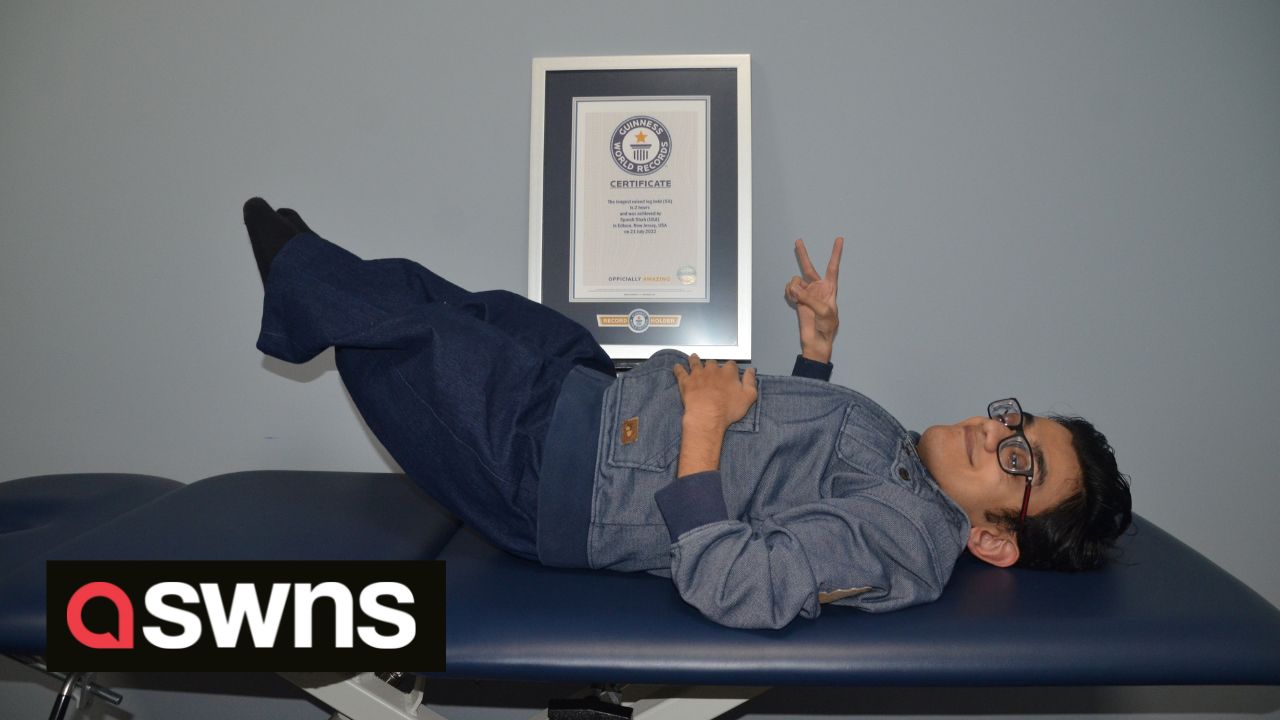 A teenager living with an incurable brittle bone disease has set a world record for the longest raised leg hold – at an impressive two hours.

Sparsh Shah, 19, has Osteogenesis Imperfecta. Living with the chronic disorder means the New Jersey native is unable to bear weight on his hands and legs.

But that didn’t stop him from taking on a world record – after he realized his core was exceptionally strong.

Sparsh had planned to stop at an hour but, realizing he could keep going, carried on for the second hour. And the musician and philanthropist’s two-hour time has been officially recognized and is now the Guinness World Record.

The 19-year-old held both of his legs in the air for two hours.https://t.co/AxuNmVvqeL

Sparsh said: “My physical therapist told me I had to strengthen my core for my back. So, I started with one to two minutes, and I kept my legs up in the air at a 45-degree angle. When I realized I could hold it for a couple of minutes, I started increasing the time every single day by a minute.”

“My doctor was the one who suggested I submit an application for the world record. He said out of all the kids he’s treated with my type of condition, he’d never seen anyone achieve the length of time I was achieving.”

Sparsh intended to set the record for the longest raised leg hold by holding his legs in the air for a full hour on July 21. The previous record is thought to have stood at 10 minutes. But after an hour passed, he then realized he could hold the position for even longer. He held his legs up for another hour before his physical therapist and father requested him to rest his legs, setting an incredible new world record of two hours.

This record is part of Guinness World Records’ impairment classifications, the organization said. This initiative introduced 23 new categories to a range of sports, strength and journey records for those with physical, intellectual and visual impairments.

Sparsh hopes his record title will spark a health campaign and inspire those with and without disabilities to go the distance when it comes to their fitness. He also intends to continue testing his own limits by training and attempting to continuously break his own record.

Sparsh told Guinness World Records’ website: “My name means ‘touch’ in Sanskrit, so, my vision is to ‘sparsh’ people’s hearts all over the world. ‘Able-bodied’ and ‘disabled’ are literally nothing but labels that have been put on us by society, so never think of yourself as disabled. You are able-bodied in your own way, and everyone is differently abled. You never know what you can or can’t do until you try. The only limitations we have are in our mind, if we set our mind free and work hard towards our goals, we can achieve the impossible.”