Kim Jong Un has allegedly resorted to a series of subversive measures aimed at weakening his enemies. 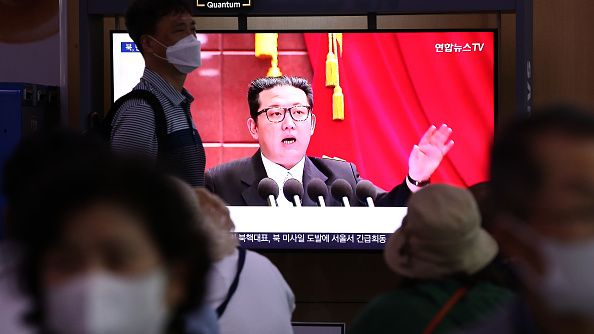 People watch a television broadcast showing a file image of a North Korean leader Kim Jong-Un in Seoul, South Korea, June 05, 2022. A day after South Korea and the United States wrapped up their joint drills near the peninsula. (CHUNG SUNG-JUN/GETTY IMAGES)

The North Korean dictator has unleashed an unprecedented wave of cyberattacks against businesses, services and websites linked to cryptocurrency, as per Japan’s national police.

What Happened: North Korean hacking group, Lazarus, is the organization behind several years of cryptocurrency-related cyberattacks in Japan, according to a public advisory statement published by the Japanese government on Oct. 14.

Japan’s National Police Agency and Financial Services Agency have issued these warnings to the country’s crypto-asset businesses, asking them to remain vigilant of “phishing” attacks by a hacking group attempting to steal crypto assets.

According to the report, the warning is part of a “public attribution” for the fifth time in history.

This comes as popular cryptocurrencies Bitcoin (CRYPTO: BTC) and Ethereum (CRYPTO: ETH) were in the green Sunday evening, as the global cryptocurrency market cap rose 0.5% to $921 billion at 9:25 p.m. EDT.

How It Works: Phishing has been a common method of attack used by North Korean hackers, according to the NPA and FSA. These attacks are orchestrated by impersonating company executives in order to entice employees to click malicious links or attachments.

The police have asked companies to keep their “private keys in an offline environment” and to “not open email attachments or hyperlinks carelessly.”

The cyber-attack group [then] uses the malware as a foothold to gain access to the victim’s network,” the advisory read.

The amount represents an increase of about $100 million over the previous year’s thefts by North Korean hacker groups, bringing their five-year total to $1.5 billion in cryptocurrency alone. This does not include the additional hundreds of millions of dollars that the country is alleged to have stolen from the traditional financial system that have not been tallied.

Despite the fact that Kim’s regime is heavily sanctioned, isolated, and dealing with a deteriorating economy, that hoard of stolen bitcoin is feared to contribute significantly to its Pyongyong’s nuclear program

Given that much of North Korea is offline, there is little chance that it will be attacked itself.

“They are unique in that they are trained and deployed and operate under a government program,” Mr. Yoo added.