In the days leading up to Hurricane Ian’s disaster, storm surge and flooding would be among the most significant dangers. 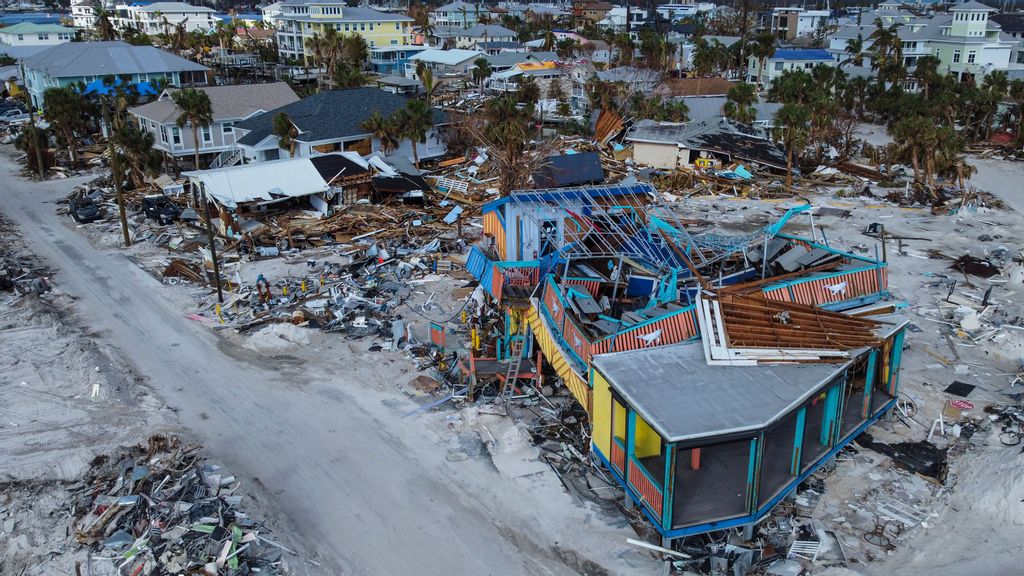 In the days leading up to Hurricane Ian’s landfall along Florida’s Gulf Coast, AccuWeather meteorologists warned that storm surge and flooding would be among the most significant dangers of the historic storm. Two weeks have passed since Ian roared ashore as a Category 4 storm in southwestern Florida, and the full scope of the storm surge damage is just now coming into better focus.

The National Weather Service (NWS) sent damage survey teams to Fort Myers, Florida, to conduct a comprehensive analysis of the damage caused by Ian. Jeff Evans of the NWS office in Houston was one of the people who helped to conduct the damage surveys along Florida’s Gulf Coast, specifically to determine where the worst of the storm surge occurred.

By studying buildings that were partially submerged in water, survey teams can see the water marks left on interior walls, cabinets and other furnishings by the flooding storm surge. Damage in one home was found several inches up in a cabinet located on the second floor of the beachfront condo. The highest water marks indicate the peak level of standing water, but waves could have reached even higher.

The highest water level found by the team so far was 15 feet above the normal high water level. Ian’s storm surge was on par with other notorious hurricanes in recent history, including Hurricane Laura, which caused a maximum storm surge of 18 feet in Louisiana, and Hurricane Michael, which unleashed a storm surge of up to 15 feet in the Mexico Beach area of Florida.

At the level detected so far from Ian, all of Sanibel Island, a barrier island just west of Fort Myers, was inundated by feet of water.

Even though the height of the storm surge was correctly forecast by AccuWeather meteorologists and was one of the primary reasons why the AccuWeather RealImpact™ Scale for Hurricanes was rated a 5 for Ian, residents have told AccuWeather reporters that they were taken aback by how quickly the water rushed in from the Gulf of Mexico.

“Surge seems to be a difficult aspect of the storm to visualize in a person’s mind when compared to heavy rainfall or wind because on balance, few people have seen for themselves how quickly storm surge flooding can result in rapidly rising water which inundates anything and everything in its path – often times moving well away from the immediate coast through bays, inlets and tidal rivers,” AccuWeather Chief Meteorologist Jon Porter said.

On top of that, there are other factors that compound the storm surge dangers besides the level of water and how far it can reach beyond the immediate coast.

“There are crashing waves on top of the water level increase, making the situation even more dangerous and creating further damage. The power of this water can be seen in the pictures from Fort Myers and surrounding communities where homes and businesses are destroyed in a similar way to the complete destruction you would see in a war zone and large boats resting miles inland, well away from the now receded water,” Porter explained.

The meteorologists surveying the damage know the impacts of the force of water all too well.

Residents who decided to stay in their homes to ride out Ian quickly found themselves scrambling to reach higher ground as the water rose.

“We’ve heard stories of people that perished in their cars [while] trying to drive out of the surge,” Evans said.

He added that anyone in this situation should try to get to the highest level of the structure rather than trying to navigate through the dangerous storm surge to get to higher ground.

According to a report from Florida’s Department of Law Enforcement issued on Wednesday, Oct. 12, of the 108 fatalities reported across the state, at least 58 were related to drowning.

The plethora of data collected from the Fort Myers area will be critical for improving storm surge forecasts in the future when the next major hurricane threatens the Gulf Coast.

“By knowing exactly what happened, we can go back and maybe tweak the model and maybe do better on the next storm with the forecast,” Evans said.

Forecasters are also reflecting back on how meteorologists and local officials communicated the dangers of Hurricane Ian to the public, stressing that people should look at the storm as a whole and all of its potential impacts, factors taken into consideration in AccuWeather’s RealImpact™ Scale for Hurricanes.

“AccuWeather hurricane experts accurately forecast a surge of 16-20 feet in the hardest hit communities, which was the highest and most accurate forecast of storm surge available from any source,” Porter said.

Water impacts both from coastal inundation as a result of storm surge as well as inland flooding often result in a greater death toll in hurricanes than wind damage itself, according to Porter, who highlighted that is why AccuWeather forecasters “used urgent and descriptive warnings in advance of Ian to help people understand the devastating and dangerous flooding that would ensue and how quickly it would escalate.”

Porter said the hope was to communicate this urgency in order to reiterate the need for people to safely evacuate from areas impacted by storm surge and other dangers. Storm surge survey crews echoed the critical importance of heeding all evacuation orders when they are issued by officials.

“Really the key is listening to evacuation orders, listening to your officials and trusting them, they’re making decisions on your best behalf,” Evans said.

Evans told AccuWeather that his team is wrapping up their work in Fort Myers, but the local NWS office will continue to conduct damage surveys for months to come.