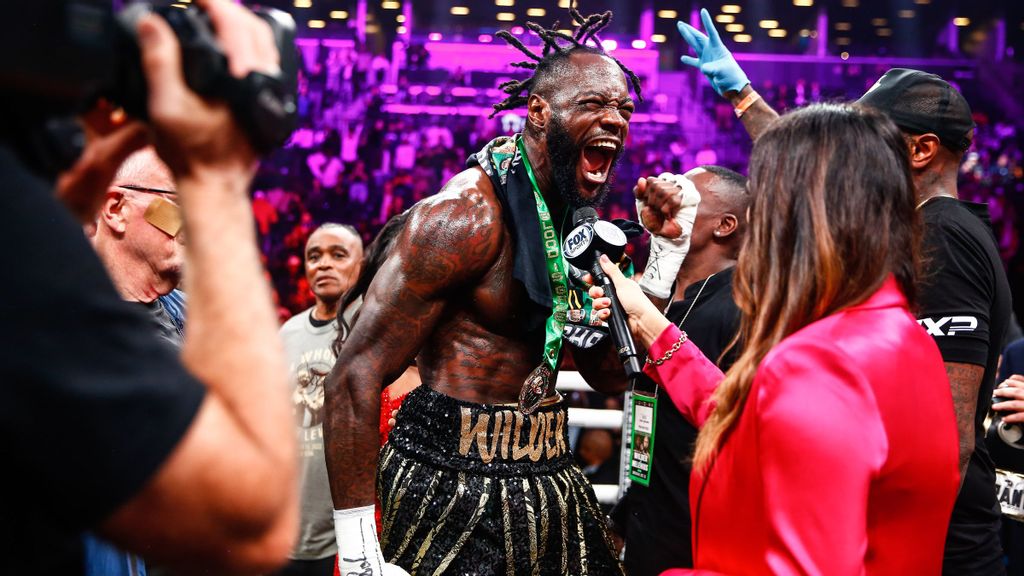 COLUMBIA, Md. — Deontay Wilder landed just three punches in the first round against Robert Helenius on Saturday night, but the final blow was so lethal the former champion was concerned for his fallen rival.

Backed into a neutral corner by the oncoming Helenius with 11 seconds remaining in the round, Wilder blasted the Swedish fighter, who fell backward as his right leg briefly folded beneath him.

With “The Nordic Nightmare’s” unseeing eyes staring toward the ceiling, referee Michael Griffin saw no need for a count, waving an end to their WBC heavyweight title eliminator bout.

“When I hit him, you could see I was preparing to throw another punch. It was so fast, it was fast for me. I didn’t even know how devastating it was until I saw him fall to the canvas,” said Wilder of his 21st career first-round knockout.

“I didn’t realize what I had done. We trained on muscle memory, so when I see things happening, I respond. We wanted Robert to reach, and once he reached, I reached. A valuable lesson was taught tonight. The heavyweight division is on check.”

“I wanted to come to his aid, but they wouldn’t let me, which I understood because he needed space. But my heart goes out to him,” Wilder said. “I hope he’s doing OK and can go back to his family. This is a tough business we’re in. Robert may be the breadwinner of his family, but if he can’t do it anymore, then what? Who pays the bills? Who pays the mortgage?”

In fact, at the post-fight press conference, a tearful and emotional Wilder expressed concern for Helenius, likening his former sparring partner’s situation to that of life-altering, career-ending brain injuries suffered by Prichard Colon following an October 2015 fight with Terrel Williams.

Helenius announced he was OK on his Instagram account, posting a photo of himself from a hospital visit.

The fight was a turning point for Wilder.

The former heavyweight champion ended a year and six days of inactivity against Helenius, whose three-fight KO streak had included consecutive fourth- and sixth-round stoppages of previously unbeaten contender Adam Kownacki in March 2020 and October 2021.

“The Bronze Bomber” had recorded seven straight knockouts before going 0-2-1 in his past three fights with the 6-foot-9 Tyson Fury, twice being knocked out and dethroned as WBC champion.

Fury was twice floored by Wilder during their draw in December 2018 before winning by seventh- and 11th-round stoppages in February 2020 and October 2021.

Now, Wilder has his eyes on a new prize.

He is pursuing a clash with undefeated two-division title winner and unified heavyweight champion Oleksandr Usyk (20-0, 13 KOs), who was a no-show after having vowed to be ringside at Barclays.

A 35-year-old Ukranian southpaw, Usyk dominated and dethroned IBF/WBA/WBO champion Anthony Joshua in September 2021 before winning a return bout by split-decision in August.

Does Wilder believe a fight with Usyk will be more difficult to land after Saturday’s demolition of Helenius?

“I’ll be very surprised if he sticks to his word. I’m a man of my word. I abide by principles, morals and goals. The last champion that came to a fight said he would give me a fight. He went the other way after a devastating knockout,” Wilder said.

“We’re talking about [former WBO champion] Joseph Parker. I’m going to keep Usyk to his word, but we’ll see what happens. We will be calling his team. If he’s a man of his word, what a helluva fight it will be.”

“The Bronze Bomber’s” career is one of being mostly out-weighed and undersized by opponents. Wilder weighed 212 &half;, 231 and 238, respectively, in his fights with Fury, whose corresponding sizes were 256 &half;, 273 and 277.

“Many people were worried about my weight and different things like that, but we just went back to basics. I wanted to come in at a happy weight, and my happy weight is whatever it is. God didn’t bless me with size, he blessed me with power,” said Wilder, who was out-weighed by Helenius, 214 &half; to 253 ¼.

“I’m better with my power at the lower weights. That’s why I can hang with these guys who outweigh me by 20, 30, 40 and even 50 pounds.  Once you go above God’s recommendations for you, things happen. You have to go back to what got you there. My defense is my athleticism, and my quickness is my athleticism.”

“The Bronze Bomber” improved to 5-0 with as many knockouts at Barclays Center, totaling 10 knockdowns in stoppage victories, including those over Artur Spilka, Bermane Stiverne, Luis Ortiz and Dominic Breazeale in his third, sixth, seventh and ninth defenses.

Wilder’s right-hand stoppages of Spilka and Breazeale were similar to that of Helenius. “The Bronze Bomber” flattened Spilka on his back for good in the ninth and final round in January 2016 and registered a one-knockdown, first-round knockout of Breazeale in May 2019.

Wilder scored three knockdowns during a spectacular first-round stoppage of Stiverne in November 2017, and a three-knockdown, 10th-round knockout of Ortiz in March 2018.

“There is something special about this place. It’s special here in Brooklyn at the Barclays Center. Especially for me. Some of my most dramatic and devastating knockouts and most exciting times have been right here — and we did it again,” Wilder said.

Wilder shared common opponents with Helenius in Johann Duhaupas and Gerald Washington, having vanquished each by 11th-round TKO September 2015 and one-knockdown, fifth-round TKO in February 2017. Helenius, meanwhile, lost to Duhaupas by sixth-round stoppage in April 2016 and to Washington by eighth-round knockout in July 2019.

The clash marked the first time in 14 fights and nearly eight years that a title was not at stake for Wilder. It was the second straight time he fought without a championship belt around his waist.

Wilder dethroned Stiverne as WBC champion by unanimous decision on Jan. 17, 2015, at the MGM Grand Garden Arena — on the 73rd birthday of the late Muhammad Ali. He became America’s first heavyweight titleholder since Shannon Briggs in 2007.

A 2008 Olympic bronze medalist, Wilder turned 37 on Oct. 22. His native Tuscaloosa, Alabama, honored him with a 7-foot bronze statue outside the Tuscaloosa Tourism and Sports building on Memorial Day.