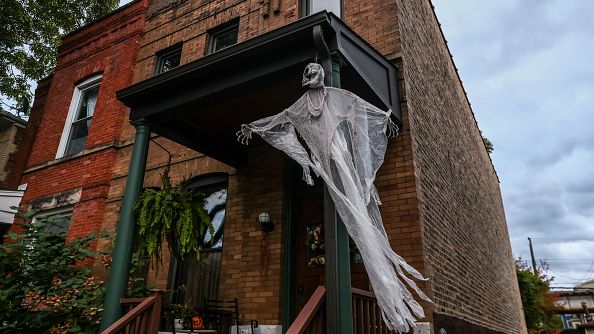 Halloween decorations outside a house in Chicago, United States, on October 16, 2022. A giant ghost model hangs on the outside. BEATA ZAWRZEL/NURPHOTO VIA GETTY IMAGES.

This creepy video clip shows the ‘paranormal’ goings-on inside a former funeral parlors which has been dubbed ‘Britain’s most haunted shop’.

Chilling footage captured on CCTV shows items mysteriously falling from shelves of the building – now an antiques shop – without any apparent reason whatsoever.

In one particularly startling clip a bizarre ‘mist’ can be seen floating through the air in the middle of the night, when the shop was locked up and empty. Daniel Parker, who owns Barnsley Antiques Centre in South Yorkshire, said “peculiar” things have “just kept happening” ever since he opened up in 2014.

The 42-year-old added: “The number of weird incidents that have happened here over the years is absolutely bizarre.

“I’m naturally skeptical about paranormal activity and all that but seeing the things I’ve seen has forced me to think twice. I’ll just be stood at the till and things will start dropping off the shelves, which would be fine if it happened a few times, but it’s all the time.

“People who know about this kind of thing think there are ghosts, spirits and all sorts in the shop – it’s all very strange,” added Daniel.

Daniel’s shop is inside a building dating back to the 19th century which once housed a funeral parlor, which some would say explains the mysterious goings-on.

Before selling antiques the building was a store selling baby clothes and equipment and in years gone by there was a graveyard over the road. Daniel said the first time he noticed something out of the ordinary was before the shop was officially opened, when an electrician was doing wiring work.

He added: “The guy rang me up and said there was smashed glass all over the floor.

“I couldn’t explain how it had got there so I went in and had a look at the CCTV, that’s when I saw the cabinet explode.

“It’s the strangest thing I have ever seen, what could possibly have happened?”

Daniel scoured his cameras for signs of a break in or a projectile being thrown but couldn’t find anything explaining why the glass smashed. Since then dozens more strange things have happened, including a heavy skull falling from a shelf to the ground and a mysterious mist floating through the air.

Daniel describes himself as a “skeptic” but said the sheer number of inexplicable incidents has forced him to “think twice”.

A medium who heard about the shop on social media got in touch with the owner and arranged to spend the night there to carry out some tests. He uncovered the spirits of two small children inside the store, said Daniel.

Some believe that these spirits are responsible for things falling off the shelves, because they’re running around and playing games. Another ‘believer’ has sensed the soul of an old man who has fallen on hard times inside the store, although Daniel isn’t sure.

“I’m inclined to say that none of that is true but to be honest I have no other explanation for what has been happening, Daniel added.

“Before opening up I was a complete non-believer, but now I’m half-and-half, maybe all the talk about ghosts and ghouls is right, who knows?”