Hard-core Christmas lovers have said they will continue the tradition of lighting up their homes. 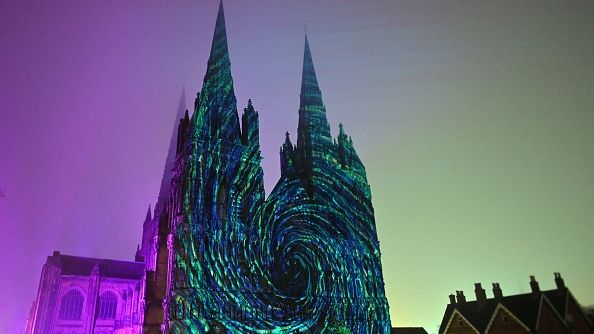 Despite the soaring cost of energy, Christmas-loving Brits have vowed to light up their homes and towns with festive decorations this year.

Although millions of house-holders are cutting back on heating, hard-core Christmas lovers have said they will continue the tradition of lighting up their homes.

Among those maintaining the festive spirit are an elderly couple who light up the UK’s darkest village every year with a 50ft Christmas tree they first planted in 1978. Avril and Christopher Rowlands planted the £6 Fir tree from a garden centre shortly after moving into their home.

43 years later, the tree now towers over their property in the village of Inkberrow, Worcs. Each year thousands of people turn up to see the tree decorated with more than 3,000 festive lights.

The couple say they won’t be put off by soaring electricity bills.

Avril, 76, said: “After two years of somewhat scaled back versions due to Covid, we’re planning to get the tree back to its full glory this year. A couple of years back our electricity provider actually gave us £100 off our bill, so we’re going to request the same this year as you never know unless you ask.”

It just wouldn’t be Christmas without it, it has been a tradition for that long now that we wouldn’t even dream of canceling it.

“During Covid, it served as a beacon of light and I still think people need that now. The only thing we won’t be doing is serving coffee from our garage, but we’ve got a mobile van doing that for us.”

“There will also be a vintage children’s funfair there, and we still hope to raise lots of money for charity. It’s a good cause, so we will carry on and not be put off by the energy prices. Thousands of people turn out for it, so we don’t want to let anybody down,” said Avril.

Elsewhere, a son who puts up 20,000 festive fairy lights each year as a tribute to his late Christmas-mad dad has also been undeterred by the cost of living.

Shaun, 28, of Telford, Shrops., said: “I’ll definitely still be going ahead with my display. I began it as a tribute for my dad and for those sentimental reasons I won’t be put off by the cost.

“I use LED lights anyway, so they are quite low consumption. I expect the costs to obviously go up, but I won’t know what that will be until the time comes.”

“We also raise money for charities like the British Heart Foundation and Mind. It began with my home but now my brother and sister decorate theirs too, so it’s expanded over three years and I won’t be deterred by the prices going up.”

“I am going to start putting them up early this year in two weeks time,” added Shaun.

Britain’s most festive village which transforms its entire hamlet into a dazzling winter wonderland is also running this Christmas but scaled back to cut down on costs. Homeowners in Haughton, Staffordshire, have been decorating their properties with festive lights for 38 years after the tradition was started in 1984.

Dad-of-two Paul Yeomans said: “We’ve only just started talking about this year, but it looks like we’ll still be going ahead but with us switching off the lights a bit earlier.

“Instead of having them on 4pm-11pm, we’ll just have them on 6pm-9pm or something like that. Everyone will put up their displays as normal I imagine. It’s for the kids, and it’s for charity, so it would be sad if we didn’t.”

“Most people use LED lights which cuts back on the cost a bit anyway, so I’m sure we’ll still have an impressive display this year.”

However, on person not continuing their festive celebrations is Iain Fleming, 37, who says he can no longer afford to put on their annual light display.

Dad-of-three Iain, has lit up his home for past 13 years with a staggering 20,000 lights. He normally spends £2,000 on lighting up his home in Hamilton, South Lanarkshire, Scotland. But this year he has put plans on ice, due to skyrocketing bills.

Iain said: “Due to various reasons, one being the current energy situation, the Christmas Light Display will not take place this year.”

“Fingers crossed the display will be back in 2023.,” added Iain.