Two White House press secretaries are among the “fortunate 11” top Biden aids who will have their student loans reduced. 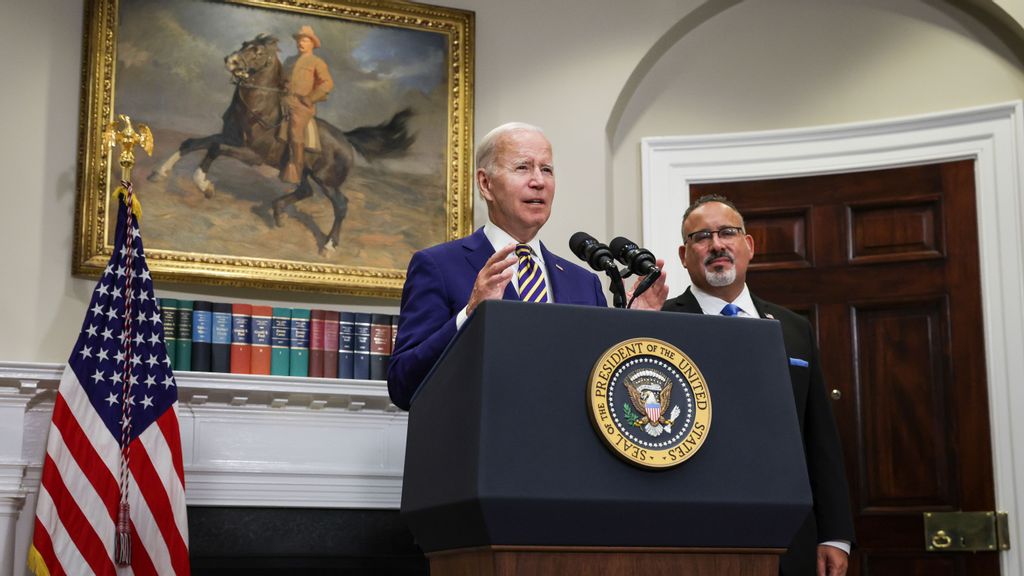 At least 11 current White House staffers – mainly special assistants to the president, who enjoy unique and personal access to the leader of the free world – meet both the income requirements and have disclosed student debts on forms filed in the past year with the White House Office of Government Ethics.

Beyond the White House, other key officials across the Biden administration also stand to benefit from school loan forgiveness. Many of those beneficiaries are presidential appointees at the U.S. Department of Education, which manages the world’s largest portfolio of student debt.

Debt-ridden staffers writing policies to shrink student debt creates a conflict of interest, in the eyes of Rep. James Comer (R-KY) and Rep. Virginia Foxx (R-NC). They raised the issue in a letter addressed to the U.S. Office of Government Ethics in June –two months before the president announced his loan forgiveness policy. The congressmen said that they were “especially concerned that this policy may have been promulgated by White House staffers who stand to financially benefit from the decision, especially considering recent reports that White House political appointees owe millions in student loan debt.”

President Biden’s plan, which promises as much as $210,000 in loan relief, applies to any U.S. citizen or legal resident who reports less than $125,000 of taxable income per year or $250,000 per year for a head of household or dual income filer.

At least 11 special assistants to the president qualify for student loan reductions, but the actual number may be far higher since new additions to the White House staff have not filed their first disclosure forms and most current White House staffers have not filed financial disclosure forms for the current year. Such forms are usually filed in the first quarter of the next calendar year. So it is possible that the total number of White House staffers, with direct access to the president, who will enjoy reductions of their student loans may be greater.

At least 300 White House staffers earn less than the $125,000 income-cap for loan forgiveness, according to the 2022 Report To Congress on White House Office Personnel. Another 174 earned more than $125,000 but less than $250,000 – meaning that they too would be eligible for loan forgiveness if they filed their taxes as “head of household” or filed jointly with their spouse.

The White House spokesman has not commented publicly on the number of White House staffers who stand to benefit from the president’s executive order reducing student loans.

The special assistants who stand to personally benefit from student loan reductions earn annual salaries of $110,000 – almost twice the national average salary of $56,310, as estimated by the U.S. Bureau of Labor Statistics.

Fortunately for these special assistants, the cap set by the president for loan forgiveness is $125,000 – just above their annual salaries.

Kelliann Blazek owes between $15,001 and 50,000, according to her financial disclosure form. She was contacted by email and did not respond.

Rory Brosius owes between $40,000 and $115,000, according to her financial disclosure form. She was contacted by email and LinkedIn, and did not respond.

Zephranie Buetow, who is also senate legislative affairs liaison, owes between $500,001 and $1,000,000 according to her financial disclosure form. She was contacted by email and did not respond.

Claudia Chavez owes between $15,001 and $50,000, according to her financial disclosure form. She  was contacted by email and did not respond.

Michael Leach, who is also chief diversity and inclusion director, owes between $100,001 and $250,000, according to his financial disclosure form. He was contacted by email and did not respond.

John McCarthy owes between $10,001 and $15,000, according to his financial disclosure form. He was contacted by email and did not respond.

Justin Oswald, who is also house legislative affairs liaison, owes between $100,000 and $250,000, according to his financial disclosure form. He was contacted by email and did not respond.

Shilpa Phadke, who is also deputy director of the gender policy council, owed between $15,001 to $50,000, according to her financial disclosure form. Her form lists that her loans were paid off in March of 2021, but payments made during the COVID repayment pause are able to be refunded to the payee and people in that situation can have their balance restored to March 2020 levels, qualifying their debt for forgiveness. She was contacted by email and did not respond.

Hee Jung L (Linda) Shim, who advises the president on the personnel for economic agencies owes between $8500 and $20,000, according to her financial disclosure form. She was contacted by email and did not respond.

All these individuals reported outstanding loans of at least $10,000 in the 2021 personal financial disclosures of the President’s top aides. The total amount owed by the “fortunate 11” could be as much as $2,375,000.

Zenger uncovered the “fortunate 11” by first accessing the 2022 Annual Report To Congress on White House Office Personnel, published July 1. Next, Zenger submitted individual requests for every staff member who had a 2021 financial disclosure available from the White House Office of Government Ethics.

White House Assistant Press Secretary Abdulla Hasan responded to Zenger with the following official response: “The Administration’s student debt relief plan will deliver relief to working middle-class families across the country and 90 percent of the benefit will go to people making less than $75,000. We have put appropriate recusals in place for individuals in the White House Office who may directly and predictably benefit from student loan relief measures under consideration, consistent with the federal ethics rules.”

Nationwide, households with annual income below about $82,000 would receive the bulk — 74% — of the total forgiveness funds, according to estimates by economists at the University of Pennsylvania’s Wharton School. These families fall in the bottom two-thirds of wage earners.

Yet some of the beneficiaries of loan forgiveness appear to be directly involved in making the policy that benefitted themselves personally, alongside tens of millions of other Americans.

Some political appointees at the U.S. Department of Education also are eligible to benefit from the plan they helped create. Political staff at the U.S. Department of Education could personally benefit by total loan forgiveness of $512,646, according to estimates by the American Accountability Foundation, which on its website says it “deploys aggressive research and investigations to advance conservative messaging.” The foundation did not name specific officials who stood to benefit from the president’s policy.

Congress was given little input in the development of the student debt-forgiveness proposal. One reason for that may be public remarks by House Speaker Nancy Pelosi (D-CA), who had said that she believed the president did not have the power to cancel student debt without congressional approval.

“People think that the President of the United States has the power for debt forgiveness.  He does not.  He can postpone.  He can delay.  But he does not have that power,” said Pelosi at a July 28, 2021 press conference. “That has to be an act of Congress.  And I don’t even like to call it forgiveness because that implies a transgression.  It’s not to be forgiven, just freeing people from those obligations.”

The executive branch disagrees with Pelosi’s constitutional interpretation from this past year and points to an official memo from the Education department’s Office of the General Counsel, which issued a finding on August 23 concluding: “The (“HEROES”) Act of 2003 grants the Secretary authority that could be used to effectuate a program of targeted loan cancelation directed at addressing the financial harms of the COVID-19 pandemic.”

Within hours of the president’s announcement, Pelosi celebrated the loan-forgiveness policy: “President Biden’s bold action is a strong step in Democrats’ fight to expand access to higher education and empower every American to reach fulfillment. By delivering historic targeted student debt relief to millions of borrowers, more working families will be able to meet their kitchen table needs as they continue to recover from the challenges of the pandemic.  Importantly, this action will help those most in need, easing a financial burden disproportionately harming women and people of color.”

Another big issue associated with loan forgiveness is cost.

The White House released a formal cost estimate for the plan on August 26. No number was made public when the proposal was first announced.

White House Press Secretary Karine Jean-Pierre, who has student debt but earns more than $125,000, told CNN’s Don Lemon the forgiveness plan would cost $24 billion per year. The White House later estimated $240 billion over the next 10 years.

The nonpartisan Committee for a Responsible Federal Budget put forth a middle estimate of $500 billion, with a range of $440 billion to $600 billion. The committee’s estimate analyzes a number of factors, including the extension of the loan repayment pause through the end of the calendar year, the new income-driven repayment plan, and the broad debt forgiveness of either $10,000 or $20,000 per eligible borrower and/or household.

The nonpartisan Congressional Budget Office, which scores federal proposals for fiscal impact, estimated that the cost of student loans would increase by an additional $400 billion.