How Modern Humans Co-existed With Neanderthals

Up to two percent of DNA carried by Europeans is inherited from Neanderthals who interbred with their ancient ancestors. 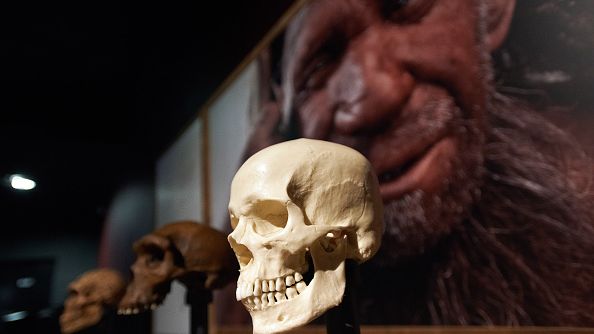 A human skull is on display with a picture of a Neanderthal man. The Museum of Natural History of Toulouse, Toulouse. France. October 3rd 2019. (ALAIN PITTON/NURPHOTO VIA GETTY IMAGES)

Modern humans co-existed with Neanderthals in Europe for up to 3,000 years, according to new research.

Analysis of dozens of artifacts shows they overlapped in France and northern Spain for much longer than previously thought.

Distinctive stone knives suggest they shared primitive technologies and may even have interbred. Computer modeling found the two species lived side by side for between 1,400 and 2,900 years.

Lead author Igor Djakovic, a PhD student at Leiden University, The Netherlands, said it is the first evidence of direct encounters “at any regional scale.”

Despite their stocky frames and heavy brows, Neanderthals were remarkably like us and occupied Europe for more than 300,000 years. This is about 200,000 years longer than Homo sapiens have roamed Earth.

Mr. Djakovic said: “It indicates our understanding of the timing of these occupations may not be suffering from substantial gaps in the record. Whether or not this co-existence featured some form of direct interaction, however, remains to be resolved.”

Recent fossil evidence suggests modern humans and Neanderthals may have co-existed for as long as 5,000 to 6,000 years. But currently, it is difficult to establish when the two species first appeared and disappeared in the areas of their co-existence.

The international team scanned a dataset of 66 Neanderthal and modern human relics from 17 archeological sites as well as an additional ten Neanderthal specimens.

The researchers used complex statistical equations to estimate the date ranges and the populations responsible. It enabled them to infer the earliest and latest times humans might have been present – filling in missing portions of the archeological record.

Mr Djakovic said: “This is largely consistent with previous estimates, and reaffirms the duration of co-existence between these groups during the early western European Upper Palaeolithic.”

The demographic landscape of Europe was transformed between 40,000 and 50,000 years ago, whereby, Neanderthals disappeared from the fossil record as modern humans started populating the region.

Recent evidence from Bulgaria, the Czech Republic and south-eastern France indicates the first arrivals occurred at least 45,000 years ago – and possibly as far back as 54,000 years.

Mr Djakovic: “At a continental scale, this would suggest a possible overlap of upwards of 14,000 years between these human species.

“Yet, little is known about the nature, timing, and specific geographic areas of interaction between Neanderthals and Homo sapiens during this critical period in human evolutionary history.

“For example, genetic data has shown there to be notable variation in the presence of recent Neanderthal ancestry in early modern humans in Europe. Although the sample size is limited, it is interesting to note that no late European Neanderthals have yet exhibited evidence of a recent modern human ancestor.

“One possible explanation for this pattern is that, at least in some regions, the first modern humans to colonize Europe may not have directly encountered Neanderthals,” Mr Djakovic added.

Up to two percent of DNA carried by Europeans is inherited from Neanderthals who interbred with their ancient ancestors.

Mr Djakovic said: “Taken together, these observations strengthen the proposition that the initial Upper Paleolithic in this region likely involved a period of co-existence
between Neanderthals and Homo sapiens.”

The study was published in the journal Scientific Reports.