While mines stay open, bars and churches and others without political connections have been closed by government order. 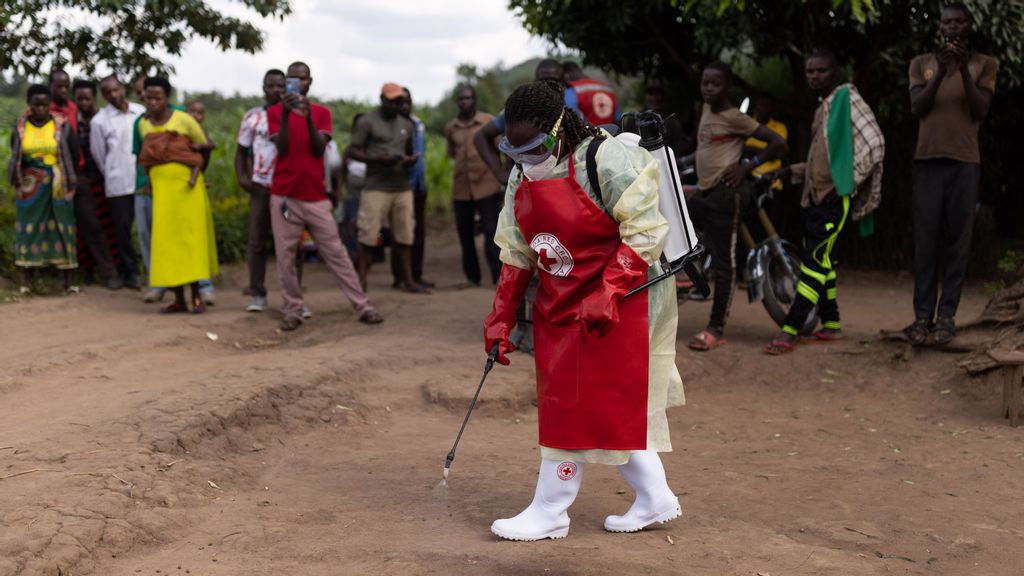 A Red Cross worker creates a 'green zone' before donning PPE prior to burying a 3-year-old boy suspected of dying from Ebola on October 13, 2022 in Mubende, Uganda. Emergency response teams, isolation centers and treatment tents have been set up by the Ugandan health authorities around the central Mubende district which is the epicenter of the current outbreak.

Uganda is taking new measures to fight a deadly Ebola outbreak in the African country.
54 cases of Ebola have been identified in the country as of Friday morning, according to a Ugandan government spokesperson.

“The Ebola outbreak is so far limited to a few districts in mid-central Uganda and has been largely contained,” said Chris Baryomunsi, Uganda’s Minister of Information, in an exclusive interview with Zenger News,” we have already implemented contact tracing and other surveillance measures to minimize chances to of spreading of the virus to other people.”

Ugandan President Yoweri Museveni is expected to make a major speech on the virus this Saturday that will include new measures to limit the geographic spread of Ebola, which has claimed at least 19 lives so far.

The minister stressed that visitors should not interrupt travel plans to the country and that Uganda’s authorities were hoping to end the crisis soon. Elsewhere, a man in Israel is under quarantine for possible contact with Ebola in Uganda. An initial test he performed came back negative though the virus can stay in incubation for 21 days. The United States began implementing a health screening for all passengers arriving from Uganda this past week. Meanwhile, the United Kingdom this week pledged approximately $2.5 million in aid to Uganda to fight the outbreak.

“An individual died in Kampala after being admitted to a hospital though he contracted the disease while in his region, so we don’t consider this to be the first case to have occurred in Kampala,” Baryomunsi. The man was later buried in his home region and was known to health officials as a probable Ebola case at the time of his death. The man’s wife, who had just given birth, has also been infected with the virus.

Ebola is a hemorrhagic virus known for its lethality. It has been known to kill anywhere between 25% and 90% of those who contract the virus. Symptoms can include intense muscle pain, vomiting, diarrhea, and rashes. Ebola is spread through contact with infected bodily fluids. Ugandan officials are investigating the initial source of the outbreak, which remains unclear.

“The COVID-19 pandemic meant that we had a stockpile of personal protective equipment (PPE) that was available for use to stop this crisis, said Baryomunsi,”more than that, it means the government, medical professionals, have all been tested in facing a crisis like this. Fighting the pandemic and containing an Ebola outbreak involves similar capabilities and we are prepared for this challenge.”

The largest Ebola outbreak in recorded history occurred between December 2013 and June 2016. That outbreak claimed over 11,000 lives, primarily in West Africa. Cases were recorded as far afield as the United Kingdom, Britain, and Italy during that period. The United States has not had a recorded Ebola case since 2014.

Earlier this week, health representatives from nine African countries met in Kampala to coordinate a response to the outbreak.

“One of the crucial lessons Africa has learnt from previous Ebola outbreaks is that by uniting, we stay a step ahead of the virus. Through sharing information and resources, countries can go from firefighting to building an outbreak firewall and halting the spread of infections,” said Matshidiso Moeti, WHO Regional Director for Africa at the time.