Hurricane Ian’s horrendous path of destruction displaced many families from their beloved pets. 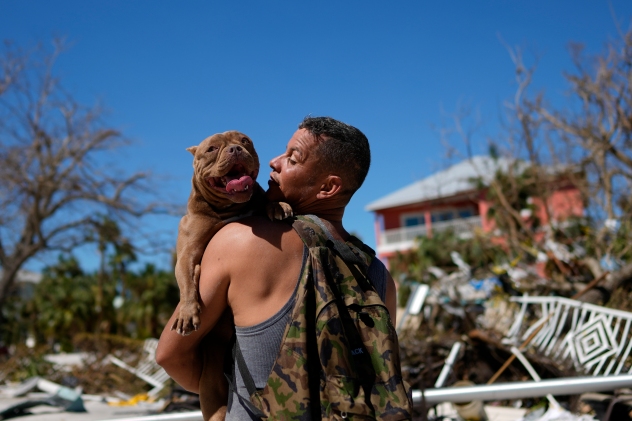 Eduardo Tocuya carries a dog he recovered in hopes of reuniting it with its owners, two days after the passage of Hurricane Ian, in Fort Myers Beach, Fla., Friday, Sept. 30, 2022. (AP Photo/Rebecca Blackwell)

Hurricane Ian’s horrendous path of destruction through southwestern Florida at the end of September displaced many families from their beloved pets. In the hurricane’s aftermath, one Florida-based animal rescue facility is on a mission to provide shelter, food and medical care to as many furry friends as possible.

Big Dog Ranch Rescue, located in Loxahatchee, Florida, just northwest of West Palm Beach, was founded in 2008 by Laurie Simmons. Since then, it has become the largest no-kill dog rescue in the United States, “committed to rescuing, nurturing and adopting dogs into loving homes,” according to its Twitter page.

In an exclusive interview on AccuWeather Prime, AccuWeather Senior TV Broadcast Meteorologist Adam Del Rosso spoke with Simmons about the rescue shelter’s response to the influx of surrendered pets from Ian survivors who have lost nearly everything.

“Big Dog Ranch has always been one of the first responders for hurricane situations, and we’re trying to help as many displaced pets as possible,” Simmons said as she held a small dog named Winston who was surrendered to the shelter by a family fleeing from the path of Ian.

In the weeks following Ian‘s landfall as a powerful Category 4 hurricane on Sept. 28 in southwestern Florida, Big Dog Ranch Rescue has been on the frontlines of the disaster zones of the hardest-hit areas of the Sunshine State.

“What we’ve seen over on the west coast of Florida is so many dogs displaced because their homes were flooded, people have nothing to go back to,” Simmons said. She added that finding shelter is even harder in the wake of natural disasters when you own a pet, especially large breed dogs, as not all shelter facilities that evacuees stay at allow animals.

Simmons and her dedicated team have been transporting dog food, water, beds and other pet supplies via large buses to animal shelters and humane societies in the areas wallopped the hardest by Ian. Supplies are also being sent to emergency shelters where pets are welcome in order to assist owners in taking care of the basic necessities of their dogs.

“It is a huge undertaking and we’re very, very thankful for people that have donated to our hurricane missions because that’s what enables us to do this work. It’s expensive to put the bus on the road, buy supplies, get them over there, bring all these dogs back, treat them medically, care for them daily until they find that perfect family that comes to adopt them,” Simmons said.

Due to the volume of animals in shelters in the hard-hit zones, Big Dog Ranch Rescue is also transporting dogs back to its main facility in Loxahatchee. Some individuals are sheltering their animals at the ranch for only a month or so until they can find more stable housing, according to Simmons.

During non-storm situations, the rescue organization saves dogs from more than 150 overcrowded kill shelters throughout Florida, Georgia, the Carolinas, Tennessee, Alabama, Mississippi, Louisiana and even as far west as Texas. Once in the facility, dogs are spayed or neutered and given medical treatment.

“We get them healthy and ready for a loving home,” Simmons said.

The organization has just purchased a second, 100-acre facility in the town of Shorter, Alabama, located about 23 miles east of Montgomery, to expand its reach and provide more life-saving services to animals.

People are surrendering animals at an all-time high not just because of natural disasters but also because of rising costs, according to Simmons.

Simmons noted that adopting a dog, as opposed to buying from a pet store or breeder, is another way to help.

“Giving one a home gives us the space to go save another,” Simmons said.

«Previous Post
Best Places In The US To View The Solar Eclipse On Oct. 14, 2023»Next Post
Meet Britain’s Bravest Dog