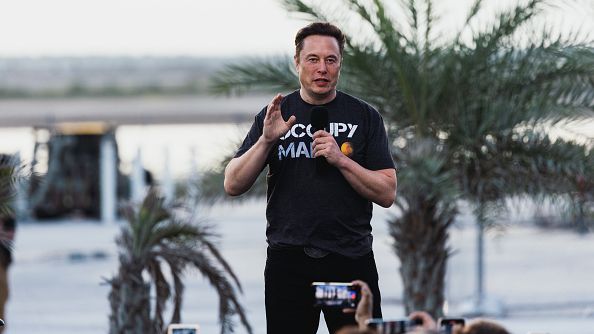 Elon Musk, during a news conference at the SpaceX Starbase facility in Boca Chica, Texas, US, on Thursday, Aug. 25, 2022. Photographer: Jordan Vonderhaar/Bloomberg via Getty Images

Elon Musk denies claims that he spoke to Russian President Vladimir Putin directly about the threat of nuclear strike against Ukraine.

The Tesla CEO was caught in yet another controversy earlier this week, when Eurasia Group CEO Ian Bremmer alleged that he was privy to Moscow’s potential plans of aggression, before laying out his infamous Ukraine peace plan.

In a weekly newsletter to Eurasia subscribers, Bremmer wrote that Musk had told him personally that Putin was “prepared to negotiate”, if Crimea was recognized as Russian territory. He alleged that the richest man in the world told him that Putin would accomplish his goals at any cost, and retaliate with a nuclear weapon, should Ukraine try to reclaim Crimea.

“Everything needed to be done to avoid that outcome,” Musk allegedly said to Bremmer.

Crimea was a Ukraine-controlled peninsula until Russia annexed it in 2014. The annexation came about as a result of the Crimean status referendum in which 95% of voters backed joining Russia. The referendum however, is considered disputed for not complying with the Ukrainian constitution and international law.

The electric car manufacturer proposed a peace plan on twitter last week which included accepting Russian control over Crimea and a neutral Ukraine. In light of Bremmer’s claim, this plan is believed to have come in the wake of Musk’s conversation with the Russian head of state.

Musk maintains that he has not had any contact with the Russian president lately. “I have spoken to Putin only once and that was about 18 months ago. The subject matter was space,” he tweeted.”

Despite rebutting the allegation, Musk has been involved with the conflict ever since it started. After the Russian invasion in February, the billionaire provided his Starlink satellite internet in Ukraine to keep the nation connected and help troops coordinate. Ukraine claims to have recaptured 6,000 sq km (2,317 sq miles) of Russian occupied area.

Bremmer wrote that Musk denied Ukraine the Starlink services in Crimea as it would help Ukrainian troops invade the peninsula, over which Moscow would not hesitate nuking Kyiv.

Starlink had also turned off in other regions that fell into Moscow’s control. Some believe this was intentional attempt to out the Ukrainian troops at a disadvantaged in the war zones. Musk lambasted these reports saying that events of a battlefield are “classified”.

However, it has also been reported that the service was cut to prevent Russia from misusing the network.

Musk has been very vocal about the expanding threat of nuclear war lately. “I have no desire to become involved in wars, but it is safe to say that all bets are off if the nukes start flying.” he tweeted recently.

Responding to Musk’s disclaimer, Bremmer also took to twitter and said: “elon musk told me he had spoken with putin and the kremlin directly about ukraine. he also told me what the kremlin’s red lines were.”

The twitter brawl ended with Musk writing: “Nobody should trust Bremmer”.