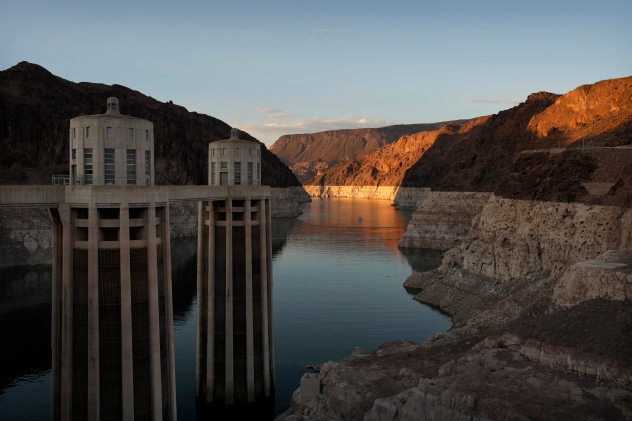 File - A bathtub ring of light minerals shows the high water line of Lake Mead near water intakes on the Arizona side of Hoover Dam at the Lake Mead National Recreation Area on June 26, 2022, near Boulder City, Nev. (AP Photo/John Locher, File)

Water levels continue to fall in Lake Mead due to worsening drought in the western United States and overuse of the Colorado River. In recent months, several shocking discoveries, such as human remains and sunken ships, have been uncovered as the water levels plummeted to historically low levels. Recently, scientists made a discovery that dates back to events that took place millions of years ago.

The falling water levels exposed sedimentary rocks that hadn’t been seen in nearly a century when the Hoover Dam was built and Lake Mead was filled. According to researchers from the University of Nevada, Las Vegas (UNLV), these sedimentary rocks are laced with volcanic ash that rained down on southern Nevada during volcanic eruptions roughly 12 million years ago.

Researchers with UNLV’s Cryptotephra Laboratory for Archeological and Geological Research (CLAGR) used geologic mapping to locate and collect samples of multiple ash layers at Lake Mead. Once the samples were chemically analyzed and compared to ashes from known volcanic eruptions across the western United States, scientists determined that the ash layers were mainly between 6 million and 12 million years old. Some of the ash found dates back to eruptions only 32,000 years ago, which in the geological time scale is not so long ago.

According to a news release of their findings, distinctive ash from four possible sources was discovered, including The Snake River Plain-Yellowstone hotspot track, which is a chain of volcanic centers in the Yellowstone National Park areas, the Southwest Nevada volcanic field northwest of Las Vegas, the volcanoes of Walker Lane in western Nevada and southeastern California and the Ancestral Cascades, which extend from northern California into British Columbia.

Specifically, the Snake River Plain-Yellowstone track has been active for the last 15 million years, according to the news release. It’s a part of a chain of very large volcanic centers that have migrated, with time, from the northern Nevada-Oregon-Idaho junction, east, to the active area of Yellowstone National Park, near the junctions of Wyoming, Idaho and Montana.

The Southwest Nevada volcanic field, which was primarily active between 7.5 million and 13 million years ago is located about 90 miles northwest of Las Vegas. It produced about 10 large calderas, or supereruptions, over its lifespan, the researchers note.

“We knew that these ash units existed, but we were surprised to find so many as the Lake Mead water level lowered,” Eugene Smith, an emeritus professor of geology at UNLV and co-author of the study, told CNN.

Since March 15, 2022, when the paper was presented to the Geological Society of America, the official water level for Lake Mead dropped from 1,067 feet to 1,041 feet in August, then increased slightly to 1,045 feet .

CLAGR lab manager and longtime Southern Nevada geologist Rachel Johnsen said that by studying the past, researchers and investigators will better understand ashfall risks and plan for the future.

“The ash layers we study come from volcanoes long extinct,” Johnsen said in a news release. “However, studying them has helped us determine just how often the Las Vegas area was inundated with ash over time and may help us prepare for future events from active volcanoes far from us.”

In the U.S., most active volcanoes are monitored and surrounding towns have an evacuation plan in the event of impending eruptions. But according to Smith, the effects of explosive volcanic eruptions on populations far from the volcano are “often ignored.”

Although there are currently no active volcanoes anywhere close to Las Vegas, the population could be affected by eruptions from volcanoes located elsewhere.

“Ash from even moderately explosive eruptions can travel hundreds of miles from the source, blanketing entire areas with anywhere from a centimeter to several meters of the heavy material, and causing disruption in aviation and automobile traffic, destroying utility lines, and by extension disrupting the transport of goods among different areas,” Smith said.

«Previous Post
AccuWeather Forecasters Study New Areas For Development In Atlantic As Karl Heads For Mexico»Next Post
Best Places In The US To View The Solar Eclipse On Oct. 14, 2023