Families in the central part of the state are still waiting for the floodwaters to recede. 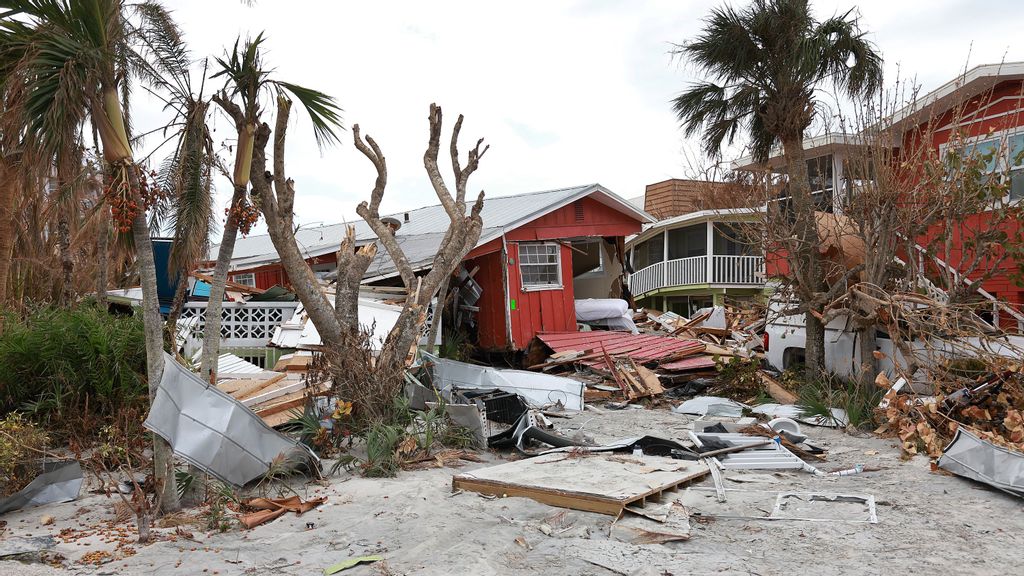 A destroyed building sits among debris after Hurricane Ian passed through the area on October 08, 2022 in Sanibel, Florida. Residents of the island are hopeful that the causeway onto the island will be repaired soon so they can start the process of rebuilding their homes after it was heavily damaged during the hurricane leaving the island cut off from the mainland. (Photo by Joe Raedle/Getty Images)

It’s been nearly two weeks since Hurricane Ian made landfall in Florida. While families along the southwest coast are busy with cleanup and recovery efforts, families over 140 miles away in the central part of the state are still waiting for the floodwaters to recede so they can begin the rough task of salvaging what is left.

In Seminole County, which is just northeast of Orlando, AccuWeather National Reporter Bill Wadell said that families along the St. Johns River and near Lake Harney cannot even begin to assess the extent of Ian’s damage and start clearing debris until the water stops pouring into their homes and starts to recede.

“We’re still taking water in,” Eddie Bennett, a Seminole County resident told Wadell. “Luckily, we’re blessed that we have a two-story house, so we’re living on the second floor.”

Waves from Lake Harney crashed into Bennett’s house when Ian sliced through the state. Julie Bennett, Eddie’s wife, described the scene of waves crashing in their backyard during Hurricane Ian as looking like she lived on the Atlantic Ocean.

Water from Lake Harney, combined with the water from the St. Johns River, one of the few rivers in America that flow north, resulted in more than a foot of water in the Bennetts’ house — something that they said has never happened, even with other hurricanes.

And it’s not just the Bennetts who have never experienced this before. Other locals told Wadell that of all the storms they had weathered before, this was the highest the river had ever risen, reaching record levels.

“It’s been the third time in 20 years I’ve been here that I’ve seen the streets flood like this,” Seminole County resident John Christiano told Wadell. “This has definitely been the highest and lasted the longest so far.”

Roadways are still inundated with water, leaving some residents to use kayaks, canoes and boats to get to and from their homes. Part of State Route 46, an east-west route in central Florida, has been deluged with water and closed off for days.

Rob Malara, another county resident, told Wadell that many homes across the county have septic tanks, and he worries about the hazards lurking beneath the surface of floodwaters.

“All this water is filled with sewer water, sewage, so it’s pretty nasty, pretty smelly,” Malara said. “That’s what the inside of the houses look like [and] smell like.”

Until then, residents will have to do everything they can to stay safe from the water. The risk of electrical shock or electrocution while using a generator can be high, especially when flooding is a factor.

Nearly 140 miles to the west, in Lee County, the ferocious storm surge and torrential rainfall flooded scores of homes and businesses. Water levels have receded there, leaving piles of debris for residents to sort through and clean up. Tom Barratt, a Fort Myers resident who owns a home-watching business, told AccuWeather National Reporter Jillian Angeline that he’s hopeful his community and southwest Florida will bounce back from this catastrophe.

“There are great stories from these buildings where people who were incapacitated due to arthritis or whatever spent the night on their kitchen counter, wondering just how high is the water going to get,” Barratt said to Angeline. “It would have been a horrifying experience. I can only imagine the prayers going up at that time. But the human spirit that’s taking place here, just incredible what people are doing to help out.”

Fort Myers residents were told to throw out any belongings that were flooded by Ian. For some, that includes everything on the first and second floors of their homes. While construction workers are placing dehumidifiers in some houses to help dry them out, residents like Barratt are working together to help save valuables that homeowners aren’t able to get.

According to AccuWeather Founder and CEO Joel Myers, the total losses caused by Hurricane Ian will be between $180 and $210 billion in the U.S.