Zohn credits his recovery to a stem-cell transplant and his athletic approach to cancer. 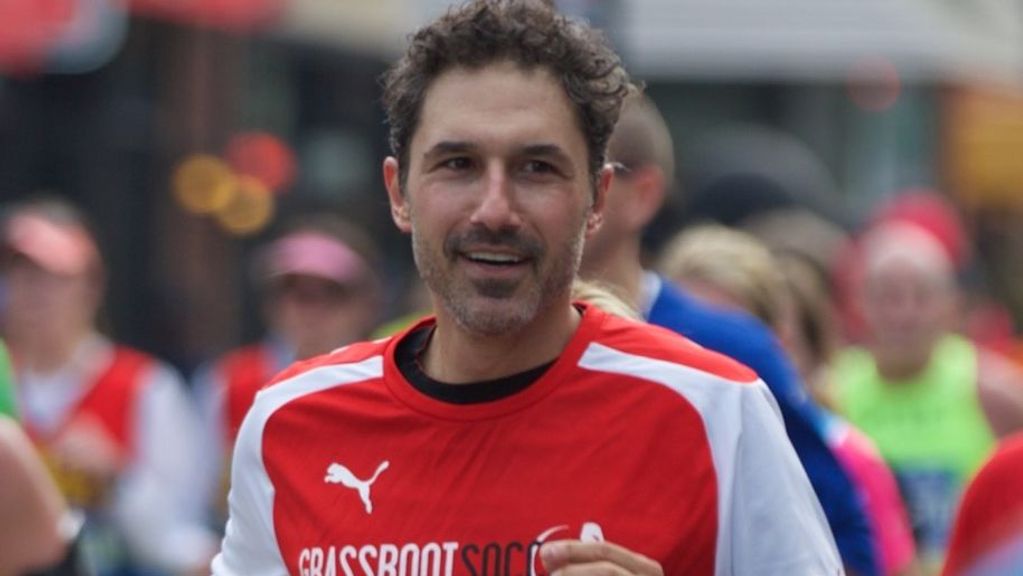 Ethan Zohn celebrated 10 years of being cancer-free by running in the Boston Marathon. (Ethan Zohn)

CBS’ “Survivor” is a competitive battle of wills with a million-dollar jackpot waiting for the winner. For Ethan Zohn, survivor is a title he will carry with him for the rest of his life.

Not only did he win “Survivor: Africa” in 2001, but he also beat a rare blood cancer, first diagnosed in 2009, on two separate occasions. Zohn uses the publicity from the show to educate the public on the deals and how to deal with the diagnosis. He also used part of his monies to co-found Grassroot Soccer, an organization that helps raise money to fight HIV/AIDS.

Zenger: You were diagnosed with a rare form of blood cancer, and you beat it twice. What was that initial diagnosis like for you?

Zohn: When I was 14, my dad passed away from colon cancer. So, growing up, my only connection to cancer was my dad. When I got diagnosed at age 35, I’m like, “I’m going to die.” That’s all I knew. I was freaked out, scared, nervous and didn’t want to die. I was a happy and healthy guy. I was training for the New York City Marathon, former professional soccer player. You never think it’s going to be you.

I was diagnosed with a rare form of blood cancer called CD 20+ Hodgkin’s Lymphoma. Went through chemo, radiation, I had autologous stem-cell transplant. That worked for a while. The doctors were psyched. They got the disease into remission. I started living my life again. Even competed in “The Amazing Race.”

Then 20 months later, the cancer returned. Getting the news was exponentially more difficult than the first time. I was running out of options, and I had to do the treatment all over again. I did chemo, radiation, I had a second stem-cell transplant, this time my brother, Lee, was the donor. Lee donated his stem cells to save my life, which is an incredible gift. I highly encourage anyone reading this to get swabbed, so you can get on the stem-cell donor database. People assume there are many matches out there for anyone. But if you are of any ethnic descent, I’m Jewish, it reduces your chance of finding a match by up to 50%.

Zenger: You did something to celebrate being 10 years in remission.

Zohn: I partnered with Trulieve Cannabis as the brand ambassador for its in-house wellness brand called Momenta. I ran the Boston Marathon for Aktiv Against Cancer. The last time I ran in Boston was in 2013, when the bombs went off. I was really happy to come back to my hometown to run the race. My father was a marathoner, so I get to follow in his footsteps, while raising money for an incredible charity. It was a blissful moment.

Zenger: Being on “Survivor,” did that somehow prepare you to deal with cancer?

Zohn: On “Survivor,” you’re playing for a million bucks. With cancer, you’re playing for your life. Yes, it did prepare me. I approached cancer like an athlete. When I was playing my best soccer ever, my body, mind and spirit were all working together. When approaching the cancer battle, I was exercising mentally, physically and spiritually. I changed my diet. I looked into more plant-based wellness, like cannabis and CBD, to mitigate some of the side effects of cancer treatment. I was on a lot of prescribed synthetic pills.

“Survivor” is a game that touches on every part of you as a human being, mental, physical, social, spiritual, environmental, even financial. You win a million bucks if you win it all. It was interesting, because with “Survivor,” you push your body to the limit, and then you have to push it a little bit more.

When I was going through cancer, it was helpful that I knew how far I could push my body, because cancer, like, “Survivor,” touches every part of you. Being in the public eye enabled me to have this platform to share some important information about what cancer is like and the issues we face.

Zenger: What is the Cancer Buddy App?

Zohn: When a doctor tells you to do something, or you’ll die, you do it. There’s no choice there. After cancer, they sent me back home in remission, they packed my pockets full of pills, and I’m on my own. That’s when it got real for me. It’s lonely and isolating going through cancer. People who loved me surrounded me, but I never felt so alone in my life. You’re starving for connection and to talk to someone who’s been through what you have.

Cancer Buddy is an app where you can sign on as a patient, survivor, or caregiver. You fill out a form, and it will match you up. I wish I had it when I was going through cancer. I wish my mom had it, my girlfriend at the time had it, because my mom could talk to another mom whose kid had cancer, my girlfriend could talk to someone whose boyfriend had cancer. Cancer Buddy is cool, and it’s free. We’re trying to get as many people on the app as we can. Nothing creates comfort and confidence more than knowing you’re not alone.

Zenger: In what ways did cannabis and fitness help battle cancer?

Zohn: I want to be clear: Western medicine, chemotherapy, radiation, saved my life. Cannabis did not cure my cancer. Cannabis helped me manage the side effects of cancer. All those pills I was taking, I eliminated some of them and reduced the dosage of others. Post-cancer, when I was plagued with anxiety and uncertainty, that’s when cannabis and CBD played a big role. I was able to take a deep breath and calm the noise. It freed my mind to where I could focus on other things. I call it the “What ifs scenarios.” What if the cancer comes back? What if I die? What if I can’t get life insurance?”

Fitness is great for anyone. An active healthy lifestyle is priceless. I naturally gravitated toward exercise when I was battling cancer, just because I am an athlete. I evaluate my life based on how fit or unfit I am.