This technology could support landing crew and large robotic missions on Mars, as well as returning heavier payloads to Earth. 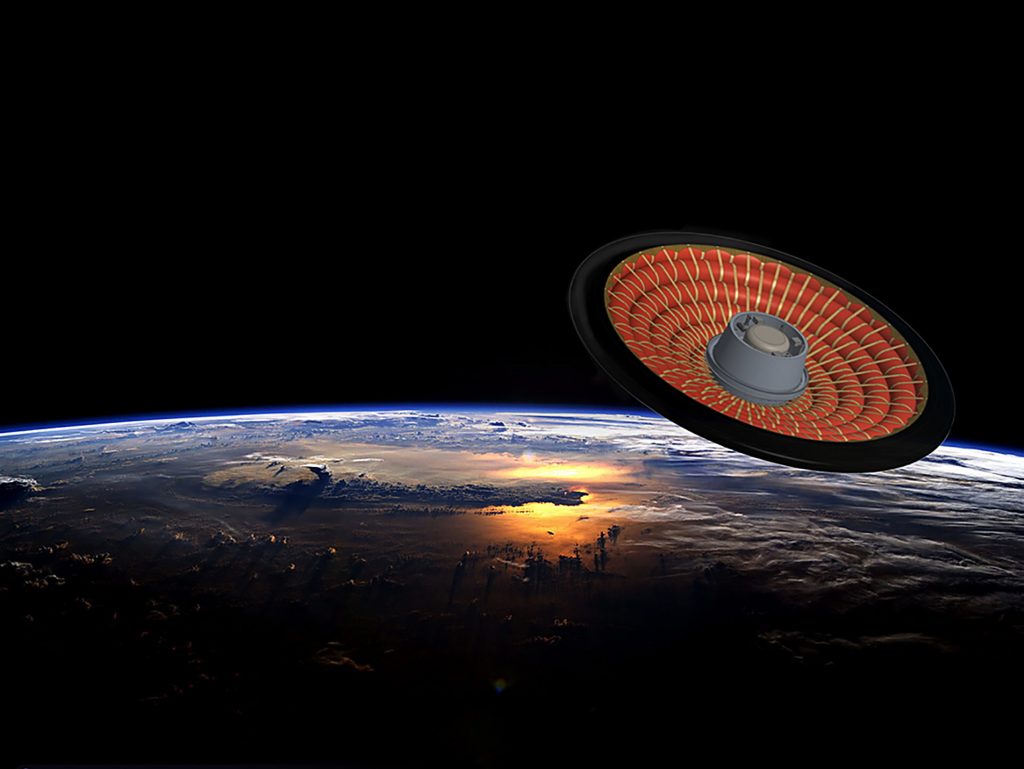 Graphic illustration of the Inflatable Decelerator (LOFTID). (NASA via SWNS)

It looks like a flying saucer – but scientists hope this otherworldly disc will help humans land on Mars.

NASA is set to launch the Inflatable Decelerator (LOFTID) prototype into space next month.

After hitching a ride to space aboard a United Launch Alliance (ULA) Atlas V rocket, the LOFTID aeroshell will inflate to a six-metre diameter and descend back to Earth from low-Earth orbit.

The aim is to demonstrate how the inflatable heat shield design can slow down a spacecraft to survive atmospheric entry.

This technology could support landing crew and large robotic missions on Mars, as well as returning heavier payloads to Earth.

LOFTID is scheduled to launch on November 1 as a secondary payload with the National Oceanic and Atmospheric Administration’s JPSS-2 polar-orbiting satellite from Vandenberg Space Force Base in California.

“For destinations with an atmosphere, one of the challenges NASA faces is how to deliver heavy payloads (experiments, equipment, and people) because current rigid aeroshells are constrained by a rocket’s shroud size,” NASA said.

“One answer is an inflatable aeroshell that can be deployed to a scale much larger than the shroud.”

“This technology enables a variety of proposed NASA missions to destinations such as Mars, Venus, Titan, as well as return to Earth.”

When a spacecraft enters the atmosphere, aerodynamic forces act upon it. Specifically, aerodynamic drag helps to slow it down, converting its kinetic energy into heat.

“Utilizing atmospheric drag is the most mass-efficient method to slow down a spacecraft,” NASA said.

“The atmosphere of Mars is much less dense than that of Earth and provides an extreme challenge for aerodynamic deceleration.”

“The atmosphere is thick enough to provide some drag, but too thin to decelerate the spacecraft as quickly as it would in Earth’s atmosphere.”

“LOFTID’s large deployable aeroshell – an inflatable structure protected by a flexible heat shield – acts as a giant brake as it traverses the Martian atmosphere.”

“It begins slowing down in the upper reaches of the atmosphere, allowing the spacecraft to decelerate sooner, at a higher altitude, while experiencing less intense heating.”