I like to focus on 60s items, but I buy anything that I have the chance to buy 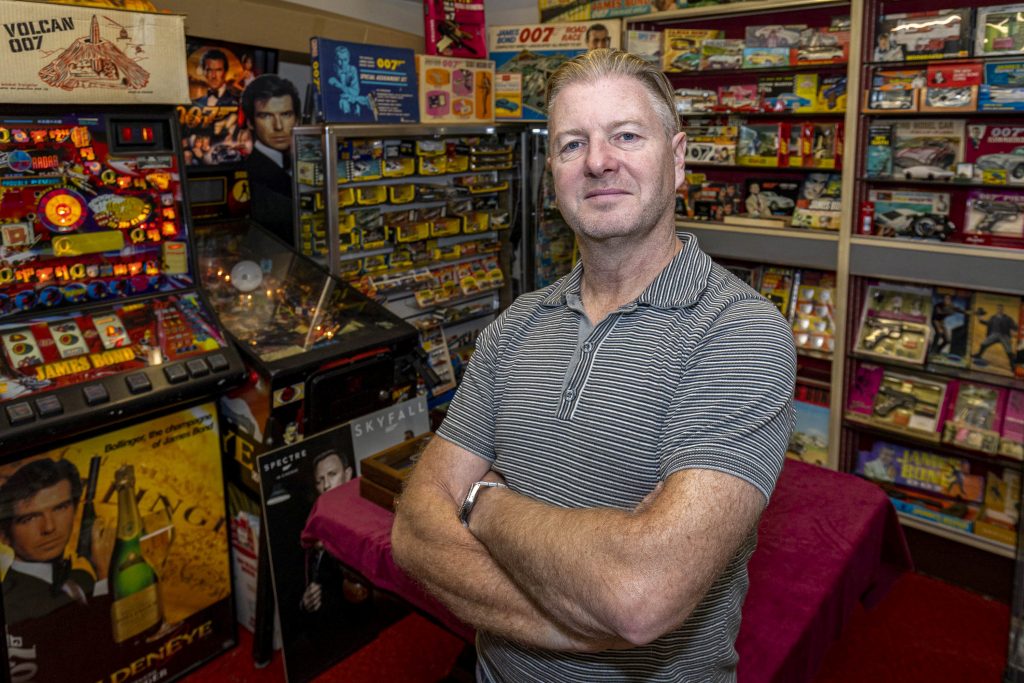 The biggest collection of James Bond memorabilia is owned by Nick Bennett. (Matthew Lofthouse via SWNS)

A lifelong James Bond superfan has amassed the world’s largest collection of 007 memorabilia that he keeps in a secret lock-up – for his eyes only.

Nick Bennett, 56, may have more than 18,000 pieces in his possession but admitted that even some of his family and closest friends don’t know about his “private” hobby.

And his ever-increasing hoard of incredible merchandise has been officially certified as a Guinness World Record, which he’s so far held for seven years.

The former landlord said his “fascination” with the fictional secret agent began when he was eight, but he only started collecting during the Piers Brosnan era, in his 30s.

Since then, he has accumulated Bond film props, toys, clothing, and wallpaper – and he even has a fibreglass boat, used to promote “Live and Let Die” in 1973.

And Nick – who has also flown as far as Boston, Massachusetts, to hunt for memorabilia – says he has no interest in winding down his confidential hobby.

“I will buy anything I haven’t got, as long as it’s affordable,” he said.

“There are Bond LPs and Bond books, and then there are the toys as well. So literally, anything you can think of is available for Bond.

“But some of my friends and family don’t even know I collect. It’s a private part of my life. It’s locked up on an industrial estate, and I’m happy for it to stay that way.”

Nick, from Leigh, Greater Manchester, England, said he first became interested in the Bond franchise when he went to see a double bill of “Live and Let Die” and “Her Majesty’s Secret Service.”

“I was eight or nine years old, and I thought it was amazing. I was always a collector – I’ve collected anything really,” he said.

“I had a very good friend, and he collected Batman, and in the late 80s when I met him, he had a room dedicated to Batman, and I thought it was amazing.

“And when I started collecting, I really wanted to have the equivalent of that room for myself.

“Then in 1995, when Piers Brosnan came out as James Bond, and I saw him in all the shops, there were loads of things out about James Bond and I started buying them.”

“It took a couple of years to get there, and now, of course, it’s gone crazy.”

Among his most interesting items, Nick has a casino chip used in the first James Bond film, “Dr No,” which will mark its 60th anniversary this week.

“I have some casino chips that are from the casino, which were used in the film,” he said.

“It can’t be guaranteed that they were seen on the screen, but they are certainly from that casino at the time of that filming.”

Nick also has an orange boat, which he believes once sat in the lobby of a cinema to promote “Live and Let Die” when it was first released in the early 1970s.

“I believe that the boat itself was used in a promotional tour in England, although that’s just a story,” he said.

“It may not be true, but it does look exactly like the one in the film – I’ve not been out on it though.”

Nick’s collection is focused more on early 1960s memorabilia, but he is more than happy to collect anything, which has been graced by the fabled 007 logo.

“I like to focus on 60s items, but I buy anything that I have the chance to buy,” he said.

“I’ve flown to the United States to pick up a toy, and I’ve driven to Germany, France, Netherlands to buy toys and come back with them.”

“I used to go abroad a lot, to other countries with other collectors, and we’d visit shows and go to shops.”

“Unfortunately, these days you can do it sitting in your armchair. You just go on the internet and buy it on eBay or one of the auction houses.”

“You used to have to struggle to find new items to buy – but now every day is a buying day.”

However, despite his world-beating 007 collections, Nick says he’s never met an actor who has taken part in the Bond films in person – and doesn’t plan to.

“I don’t sit and watch the films all the time, or anything like that. I just love collecting.”

«Previous Post
Why This Jewelry Designer Makes Pieces Using Her Own Bacteria»Next Post
UK Woman Makes Artwork Out Of Old Toys Which Sell For Up To £1,500 A Pop