Before thousands of people evacuated their homes ahead of Hurricane Ian’s arrival in Florida, they placed their valuables as high as possible, hoping they would stay safe throughout the storm 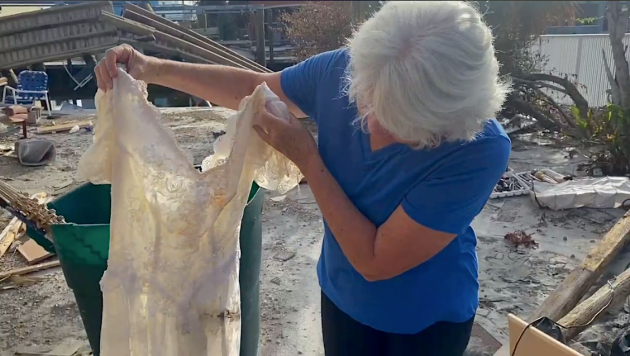 Before thousands of people evacuated their homes ahead of Hurricane Ian’s arrival in Florida, they placed their valuables as high as possible, hoping they would stay safe throughout the storm. But Category 4 Ian’s fury was too much. Now, two weeks after Ian’s wrath was felt across the Sunshine State, residents are trying to find their valuables in the debris that was strewn about.

Images and video only illustrate the damage that Hurricane Ian left behind along Fort Myers Beach. Inside the homes that are still standing, furniture is tossed about, walls are moldy and prized possessions are broken or lost.

“My pictures are strewn,” Anne told Angeline. “We found pictures in my neighbor’s yard. They’re all down the street and everywhere there.”

Anne Heerwagen shows Jillian Angeline her wedding dress, which was among the cherished items that she was able to salvage from the ruins of her home in Fort Myers Beach, Florida. (AccuWeather / Jillian Angeline)

It’s not just pictures that were lost. It wasn’t until Anne held up a white tattered clothing item among the rubble outside her home that she realized it was her wedding dress.

Although their belongings might be scattered about and debris is blocking the front door, the Heerwagens are just thankful they still have a place to call home.

“I’m blessed that I was able to have something to live in, something to drive because a lot of people lost their homes and their vehicles that live on this street,” Anne said. “It’s really sad.”

It will take months of surveying and research from NOAA to determine how high the maximum storm surge reached during Ian. But the sheer amount of damage illustrates how catastrophic the storm surge was in Fort Myers Beach and neighboring barrier islands like Sanibel Island, Captiva Island and Pine Island.

As AccuWeather’s John Murphy reported, storm surge in Florida was forecast to reach up to 18 feet on the barrier islands and Fort Myers Beach. Official storm surge gauges operated by NOAA are widely separated in this part of Florida. One of the two gauges has been operating for at least 40 years in downtown Fort Myers and measured a preliminary record-high storm surge of 7.24 feet, although since then, an insurance company and NWS storm survey have both measured a storm surge in excess of 15 feet . Investigations are ongoing to determine a final storm surge for the area.

Peter explained to Angeline that even though the damage was extensive, they will push through.

“We’re gonna make it. Don’t see any reason not to,” Peter said, adding that even though the island got nailed, “this is just a really special place.”

The Heerwagens agreed that their next home — whether it’s the rebuilt version of their current home or a new house altogether — would sit much higher in elevation.

Another ongoing challenge for Florida homeowners is the arduous task of filing insurance claims and waiting to find out the type of financial help they will get. Many families across the state are requesting help from FEMA, but it could take months or even years for some to receive support.

According to Mark Friedlander, who works for the Insurance Information Institute, only 17% of Florida homeowners carry flood insurance.

“Adjusters will need to determine what caused the loss and when,” Friedlander told AccuWeather National Reporter Bill Wadell in an interview. “Was it the wind first? Did the wind blow off the roof and the home flooded? Or did [the] storm surge cause all the damage?”

If the adjusters find that storm surge was the main cause of the damage, it is considered a flood event, according to Friedlander, and many of those homeowners will not be covered by insurance for damages.