Brown credits mental toughness and a passion for the sport as key elements in her overall success. 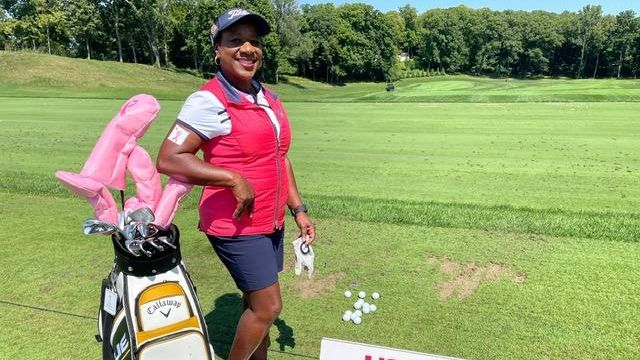 LAS VEGAS — Avis Brown comes from a family of golfers. With over 300 wins between her and her siblings in the San Diego Junior Golf and Junior PGA Tournaments, their legacy is set.

Brown extended it by recently qualifying for the U.S. Senior Open. She has also been working on her second book. Her first, “Building Of A Champion: How I Became A Champion In Life,” was inducted into the USGA Golf Museum and Library. She’s also collaborating with her manager, Marie Lemelle of Platinum Star Media Group, on a stage play, documentary and feature film about her life.

Brown is also opening a golf academy in Las Vegas to empower women and girls to become disruptors in the sport.

Zenger talks to Avis Brown about her accomplishments.

Zenger: You had to overcome many obstacles. You were a burn victim, as well as a cancer survivor. How does surviving setbacks impact your psyche on the golf course?

Brown: I love that question. When I was 5, I stood by the fireplace and a spark hit my robe, and the whole robe caught on fire. When you’re going through a horrific situation like that and come out of it, you feel you can do anything. You become unstoppable.

In regard to being a Stage 4 cancer survivor, that was brutal for me. In order to save my life, I was treated with aggressive chemo and radiation. I went in for my yearly mammogram in January 2010, and I received a notification that something looked abnormal. I went back the second time and received a final notice that everything was fine. In reality, everything wasn’t. Four months later, I go in for my yearly mammogram feeling fatigued. I didn’t know the cancer was moving toward Stage 4, caught in the early part of May 2010. It was the toughest 18 holes I ever played in my entire life going through breast cancer. I knew I was going to get through because I had the mental toughness.

Zenger: You have stepped away from golf to do other things, but always come back. Why?

Brown: It’s my therapy. When you’ve been playing golf since the age of 7, you eat, sleep and drink golf. I became a Junior World Champion at the age of 10. I was the No. 1 junior golfer for five consecutive years. I won the San Diego Women’s City Amateurs. I was “Rookie of the Year.” I played in college. After 25 years of being at FedEx, if I did not have the determination and dedication to become a champion, I would have never excelled as operations manager.

Zenger: We see the accomplishments, and you are the first black woman to achieve some of these milestones. Was that lonely for you?

Brown: I don’t see color. In theory, I have to accept it for face value, being the first black female to play in the U.S. Senior Open this year. When I play, I don’t think of color. I think of winning. I stay focused, and I stay in my lane. It’s a great feeling being here to compete. I just think about performing, playing with the best senior women’s champions around the world.

Zenger: Has the game of golf changed drastically since you started or just evolved?

Brown: It has changed a lot since I was growing up in the early 1970s. I was the only little black girl out there competing at San Diego Junior Golf and Junior PGA events around the country. That went on from age 10 to 17. Now, in 2022, I never thought I would live to see the number of young women of color learning how to play this wonderful game. Being an LPGA member, I love how they are changing the face of golf around the world.

I know I’m not the first black woman to hit this ball, but I seem to be the first to achieve a number of accomplishments and have success on the level of Ann Gregory, Renee Powell or LaRee Sugg, we played college golf together. Althea Gibson was the first black to ever have an LPGA card. Renee Powell was the second. I was the third to attempt to get an LPGA card in 1987, ’88, ’89 and ’90. I always made it to the pre-qualifier, but never the final round.

Growing up on the West Coast, I never experienced racism or discrimination. If I did, it was probably hidden. As I traveled around the country, particularly Florida, that’s when I was introduced to racism and discrimination on the LPGA Futures Tour. It wasn’t the players; it was the behavior of staff at different country clubs.

A prime example, just being here, they have a lot of black staff members. If I don’t have my badge on, they’re like: “Hey, where’s your badge? You need a badge to get through this door.” And they’re absolutely right. I’m coming in to use the restroom, and I’m not thinking I need a badge, but it’s that stare. That “what are you doing here?” stare. That’s in today’s world, and it becomes very disappointing among my own people, as well.

Zenger: How do you stay sharp on the course?

Brown: I have the mental tools to stay sharp. It allows me to stay focused and in that comfort zone. I concentrate on my performance. You have to know who you are as a person. Golf teaches you that. I hadn’t played competitive golf in over 25 years, but I never lost the drive. Hydration and fitness play a huge role, as well. I credit my energy and focus to an all-natural B1 vitamin patch by USA Natural Patches.

I’m so glad my father, Gordon Brown Sr. is still alive. He’s 86. I just moved from San Diego to Las Vegas, and we could have a conversation over the phone about a lesson. My nephew, who caddied for me at the Senior Open, KayJay McClay, is a PGA professional, too. I take lessons and coaching from him. My son, Amari Riley, 22, is a fine golfer. He did an exceptional job of carrying my bag and keeping me motivated.